How to: Migrate OS From GPT Disk to SSD

Guide to migrate OS from GPT disk to SSD without reinstallation in Windows 7/8/10 via Partition Assistant.

First I want to say how much I appreciate your partition manager. I have used many other software to try to move partitions around and they never quite work for me.

I have been trying to think of a way to thank you for this beautiful, simple and affordable product that saved my day. Again, your product is top notch.

Using Partition Assistant Server, I was able to repair the problem via Remote Desktop and a Cisco IPSec VPN. I will definitely use this product again it will always be highly recommended to my colleagues. Thanks you again.

Before we talk about how to migrate OS from GPT disk to SSD, some people may have tried to do it already but met problems. For example, part of people choose to make a backup or image to recover a new SSD. Recover works while the partition type is not exactly the same and the booting from SSD doesn’t run.

Since a tiny mistake from users in the migrating process may do great harm to OS, every one has to be particularly careful when transferring OS to SSD. By this token, you might as well try AOMEI Partition Assistant which is a powerful partition manager equipped with “Migrate OS to SSD” wizard.

AOMEI Partition Assistant enables you to migrate OS from GPT disk to SSD only by a few of clicks no matter you’re using Windows 7/8/10/XP or Vista. This feature is especially designed for users to quickly migrate operating system from old hard drive to a new one or SSD without reinstalling OS and applications. You can also copy OS from MBR disk to GPT disk because the tool allows conversion between GPT and MBR disk. Just make sure your system is 64bit as well as the motherboard supports UEFI boot.

Step by step to migrate OS

Before migrating OS from GPT disk to SSD, if there’s important data on the destination disk, you’d better make a file backup. Then connect SSD to your computer and launch AOMEI Partition Assistant. Select “Migrate OS to SSD” wizard on the left side. 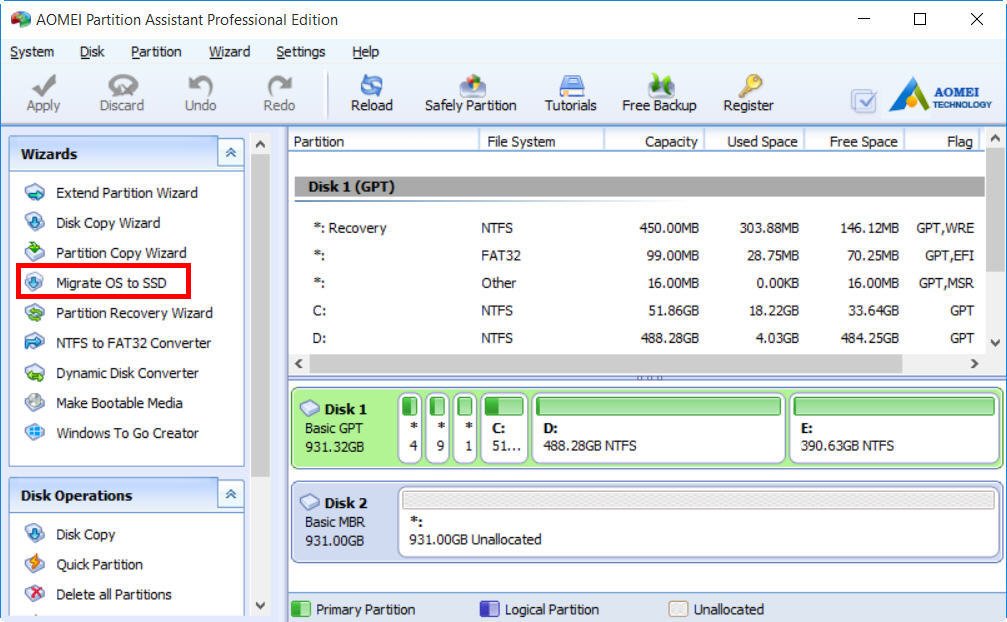 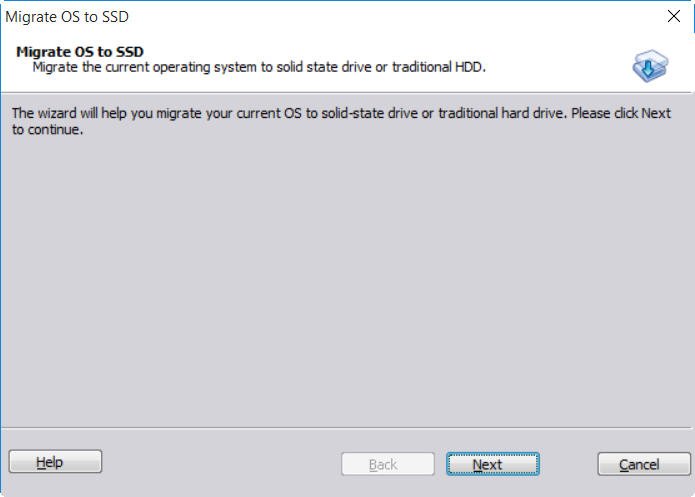 Choose an unallocated space on the destination SSD. 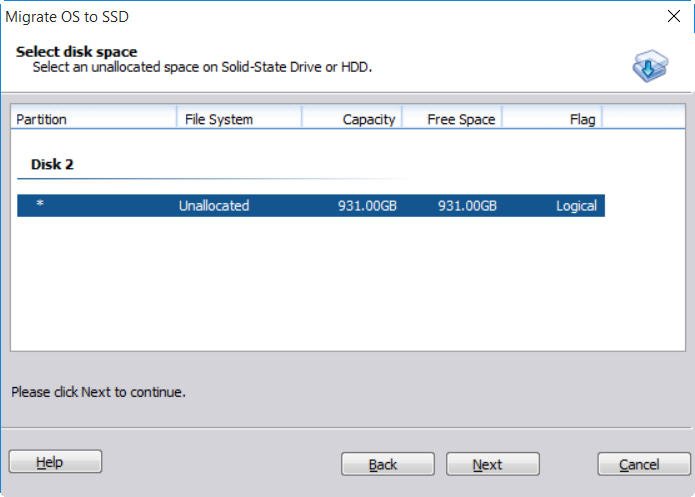 You’re able to specify the size and location of the partition being created. 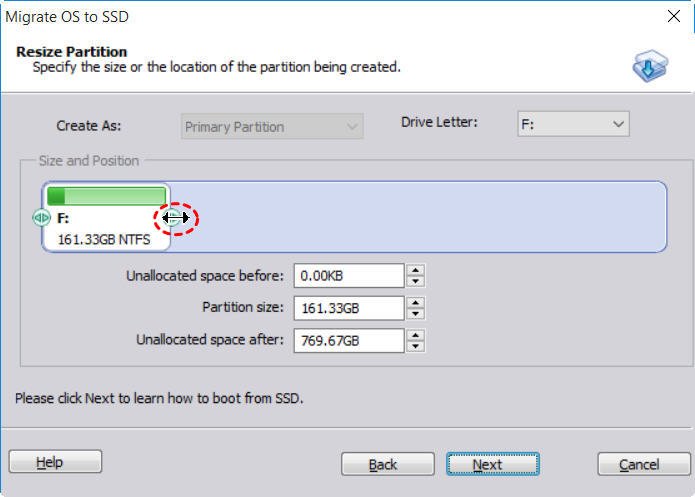 After that, you’ll view a message telling you how to boot OS from SSD. Click “Finish” to confirm settings. 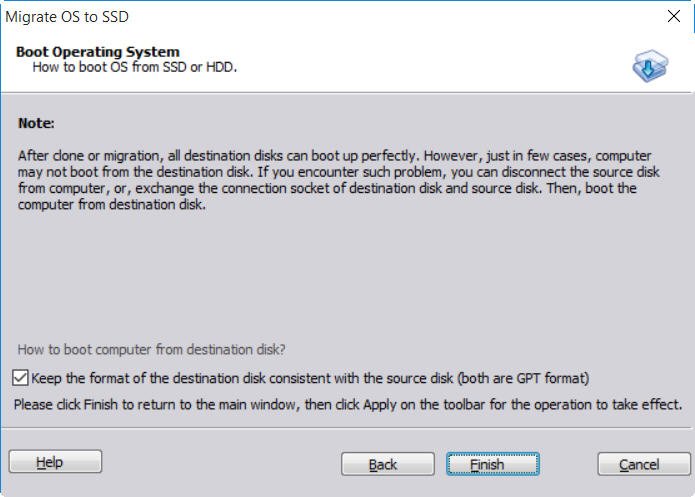 One advantage in AOMEI Partition Assistant is that you can redo any step before clicking “Apply” for execution. 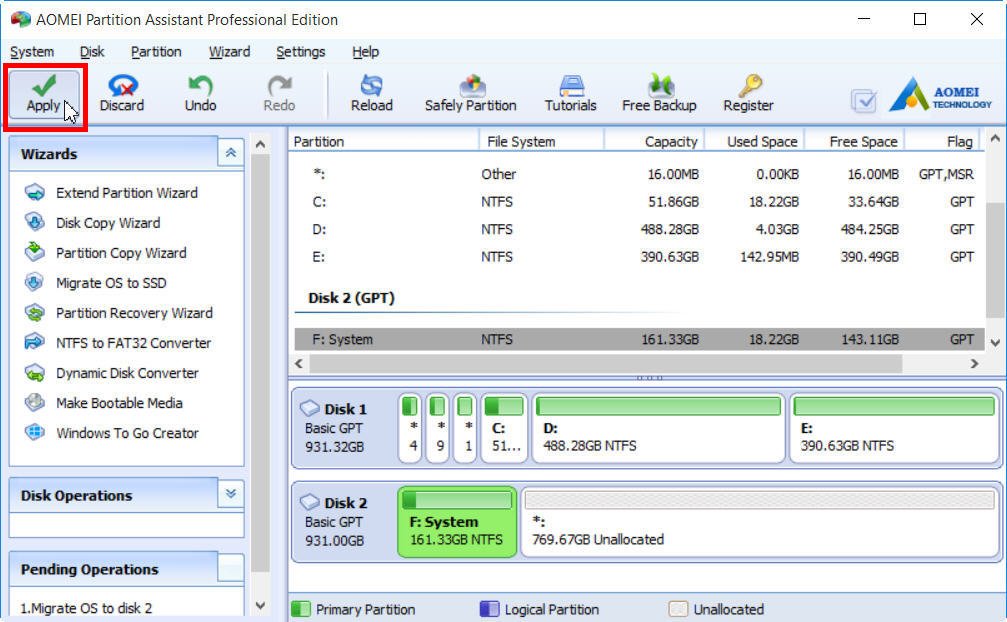 Now, you just need to wait for Partition Assistant to migrate OS from GPT disk to SSD. Well, as you see, many other functions are available too such as NTFS to FAT32 converter, Make Bootable Media wizard, etc. By the way, it’s also possible to clone OS to SSD via AOMEI Backupper for people who are employing it.