Change File System between NTFS and FAT32 without Formatting

Want to convert between NTFS and FAT32 without losing data? Learn to change file system on HDD, external hard drive, USB flash drive, or Pen Drive without formatting in Windows.

A brief introduction of file system in Windows

The way that computers store files on disk has a close relationship with the file system which is used to control how data is stored and retrieved. File System separates all data into pieces and gives each piece a name so that the information can be easily isolated and identified. The structure and logic rules used to manage the groups of information and their names are called a file system.

Nowadays, FAT32 and NTFS are the most two popular file systems in Windows operating systems like Windows 7, Windows 10, Windows 11, Windows XP, and so on. Therefore, when people talk about changing file system without formatting, they basically talk about converting NTFS to FAT32 or in turn without losing data.

◤ FAT32 (File Allocation Table 32)
FAT32 is an old file system first introduced by Microsoft and used as an extension of FAT16. The standard maximum volume size for FAT32 is 2TB and the maximum single file size is 4GB compare to the former version it has better performance, more flexibility, and robustness. 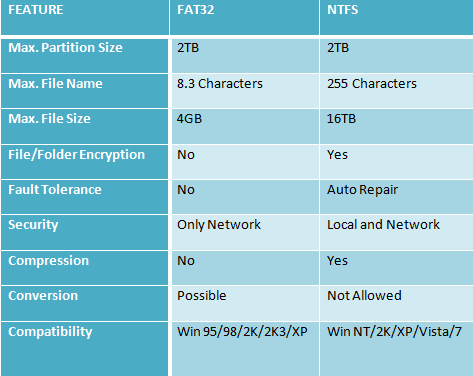 When do you want to change partition file system without formatting?

Although NTFS is more advanced than FAT32 as covered before, it cannot replace FAT32 totally, at least presently. FAT32, as a traditional file system, is compatible with many external mediums such as XBOX, PS3, Android, and so on. So some users would like to reformat to FAT32 from NTFSsometimes for other purposes. The following real situation illustrates why they want to convert the file system.

“All partitions’ file system is NTFS now in my Windows 7. I want to format the D drive from NTFS to FAT32 because the program I’ll use does not support backup unless it is FAT32. What can I do to change the drive file system without formatting and losing data? ”

What’s more, FAT32 has a deadly limitation that a single file should not be larger than 4GB. Thus, converting file system is a must-do event when you have large files say DVD ISO files on FAT32 partition to read, especially on a USB flash drive.

How to change a file system without formatting in Windows 11/10/8/7?

Thus, how can you change file system without formatting in Windows? Fortunately, you can complete this task with the help of third-party software like AOMEI Partition Assistant Professional.

You cannot do it without losing data using Windows Disk Management because it will format the partition at first. This software allows you to change file system on HDD, external hard drive, USB drive, Pen Drive, and so on in Windows 11/10/8/7/XP/Vista without formatting the partition. All operations will be completed within several clicks in a user-friendly interface. Don’t worry if you’re a novice to computers.

Step1. Download, install and launch AOMEI Partition Assistant on Windows. If you want to change the file system on a flash drive, external hard drive, or like, connect it to a computer beforehand. Click on “NTFS to FAT32 Converter” in the left pane.

Step2. Select the convert method depending on your condition. Take NTFS to FAT32 for example.

Step3. Select the partition you want to convert from the NTFS partition list.

Step4. Click “Proceed” after confirming. It will check and start the conversion right now.

◤ Notes: If the selected NTFS partition contains compressed files, encrypted files, or large files over 4GB, you are likely to get a note. After clicking “OK”, it will detect the obstructive files and showing in the box. You can move the file to other places or choose to ignore it.

Four steps are involved, you have changed file system without formatting in Windows. Besides, in the first screenshot you may notice that except for converting a file system, AOMEI Partition Assistant is capable of converting between dynamic disk and basic disk without data loss. Moreover, you can use it as Gptgen alternative to convert disk between MBR and GPT. If you are Windows Server OS user, AOMEI Partition Assistant Server is suitable for you.