What is File System

Before talking about New Technology File System, let’s review what the File System is.File system is the operating system to identify method and data structure of the file on a disk or partition, which is mean to organize files on disk. Also referred to as disk or partition to store the files, or type of file system. Operating system in the institutions responsible for the management and storage software file information is called a file management system, referred to as the file system.

File system consists of three parts: related to document management software, management, the implementation of the files and data manage structures. From a system perspective, the file system is to organize and file storage space allocation, responsible for file storage and protection and retrieval in the file system.Specifically, it is responsible for users to create files saved to, read, modify, dump files, access control files, when a user no longer use then undo file.

Windows File System can be divided into two types, FAT and NTFS.

FAT, the short of File Allocation Table, is used to record location of the file. It is very important for the use of the hard disk, missing file allocation table, data cannot be located on your hard disk and cannot be used. FAT has many restrictions. Such as, 1>. Waste the disk space; 2>. Low efficiency of disk utilization; 3>. File storage has been limited; 4>. FAT doesn’t support long filenames, only allows up to 8 bytes. 5>. FAT supports up to 32 GB partition.

NTFS, the short of New Technology File System, is standard file system of WindowsNT environment like Windows Vista, Windows 7, Windows 2000, Windows XP, and Windows Server 2003, Windows Server 2008. NTFS replaces the FAT file system, provides a file system for Microsoft Windows family of operating systems. NTFS made a number of improvements to FAT and HPFS ( High Performance File System ), such as support for metadata, and uses advanced data structures, in order to improve the performance, reliability, and disk space utilization, and provides a number of additional extensions, such as access control list ( ACL ) and file system logs. Besides those improvements, NTFS has many advantages:

● It is more security.

● It has better disk compression functions.

● It supports up to 2 TB hard drive, and it will keep the good performance no matter how much the disk volume extended.

● The single file/folder can be compressed in NTFS volume, so users can read it directly without decompression.

Conversion between FAT and NTFS

Different operating system requires different file system. Thus, sometimes, you need convert FAT to NTFS, or convert NTFS to FAT. For example, your PS3 cannot read NTFS USB drives, to solve it, you need format it into FAT32 file system. Fortunately, the AOMEI Partition Assistant can format FAT file system to NTFS, or format NTFS to FAT, what should be mentioned is that format partition will erase all data on the disk. But don’t worry, it also supports you convert FAT32 to NTFS and vice versa without losing data. To convert between FAT32 and NTFS with AOMEI Partition Assistant, you can just get into the NTFS to FAT32 Converter from the left panel, and follow the wizard step by step. 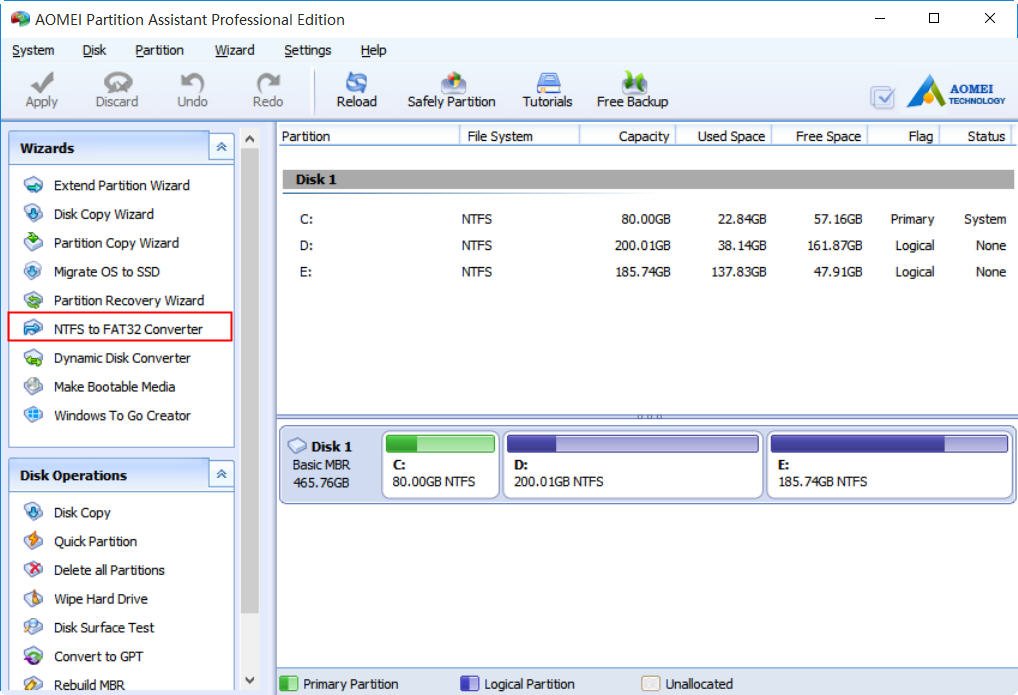 The New Technology File System is more flexible than FAT file system. But there are still many machines support FAT. So, with the help of AOMEI Partition Assistant, you can convert the file system more flexible.