“Hey guys! I am attempting to load Windows 7 on this PC but it’s asking for GPT. I know that I need to convert my MBR to GPT disk so that it can work normally. But how to do it? I have Gparted tool, and I want to know how GParted convert MBR to GPT? Is there anyone who knows the operation steps? Other effective ways are also acclaimed. Thank you!”

Besides the scenario, there are so many situations you need to convert MBR to GPT disk. For example:

According to Wikipedia introduction, GParted (acronym of GNOME Partition Editor) is an official GNOME partition-editing application. It can be used for creating, deleting, resizing, moving, checking, and copying disk partitions and their file systems. Besides, you can also use GParted to convert disk from MBR to GPT. The GParted is written in C++ and Linux operating system, and the GParted Windows ISO file can be downloaded and burn it to a CD.

As it is mentioned above, GParted is written in Linux, so in order to use it for converting disk from MBR to GPT partition style in Windows computer, users have to burn the GParted ISO files to a CD and then boot Windows PC from it, and finally convert MBR to GPT. The specific steps are:

Warning: please backup the MBR disk in advance because GParted convert MBR to GPT will erase all data on the disk.

Step 1. Download GParted ISO files and burn it to a CD.

Step 2. Put the CD into your CD drive. Boot Windows computer from the CD by changing boot order.

Step 3. Once you boot to GParted, you’ll get a similar screen to what is shown above. It should be set to GParted Live, which is the default setting. 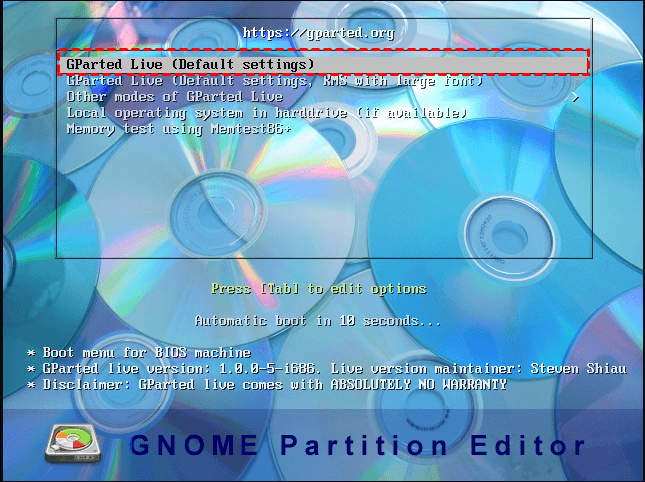 Step 4. Next, you’ll get a screen asking about what keymap to use. By default, just select “Don’t touch keymap”. 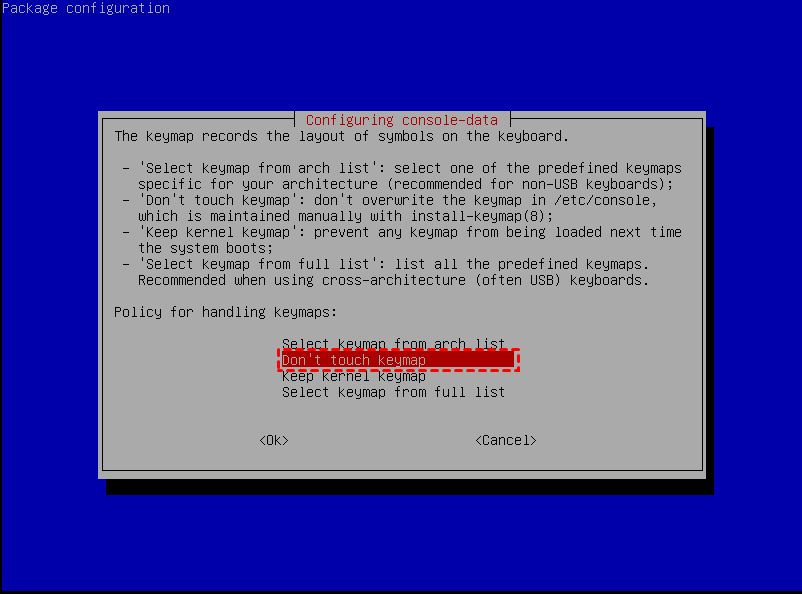 Step 5. Then you will be asked which language and which mode you want to run. Again, the default values are all fine, just press Enter. 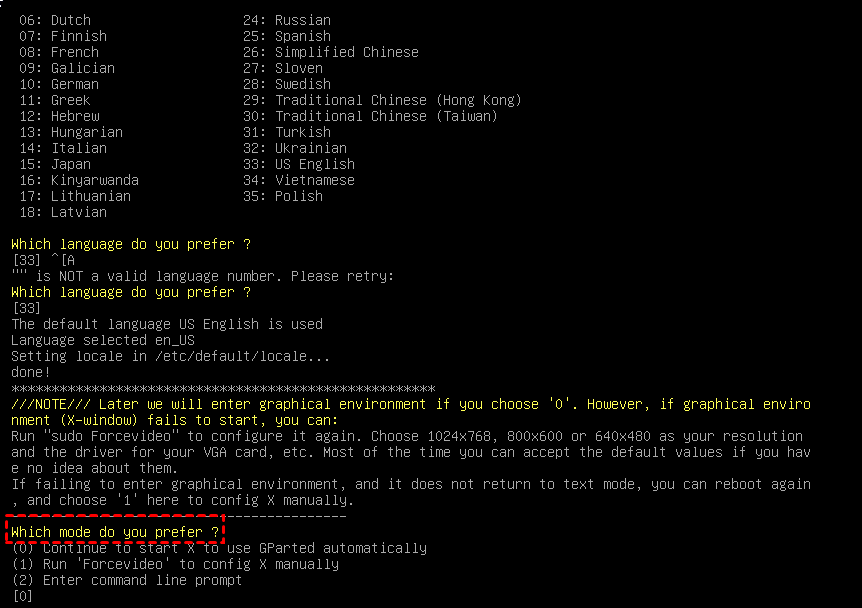 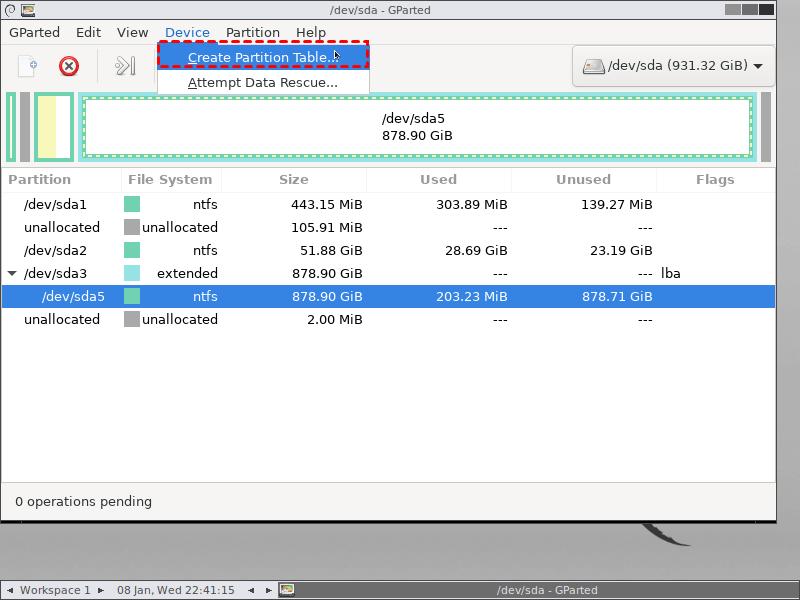 Step 7. Then choose “GPT” in the pop-out mini window. 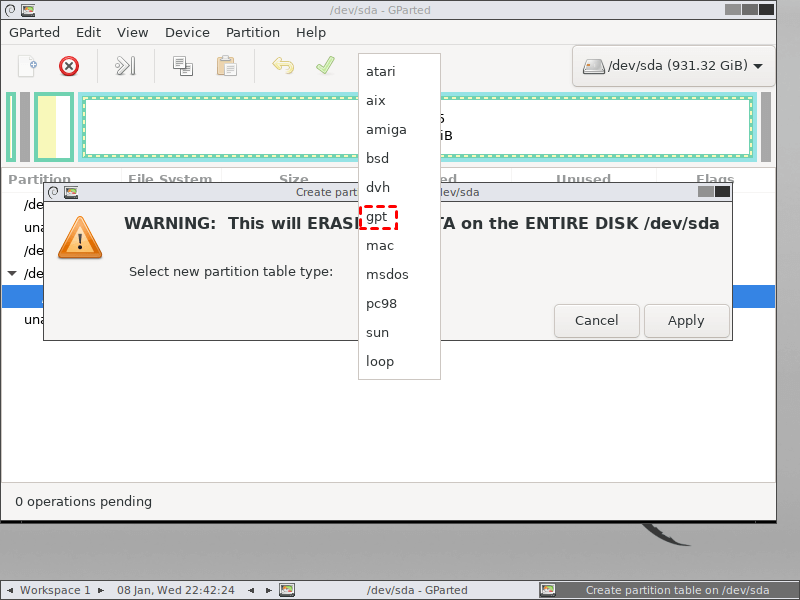 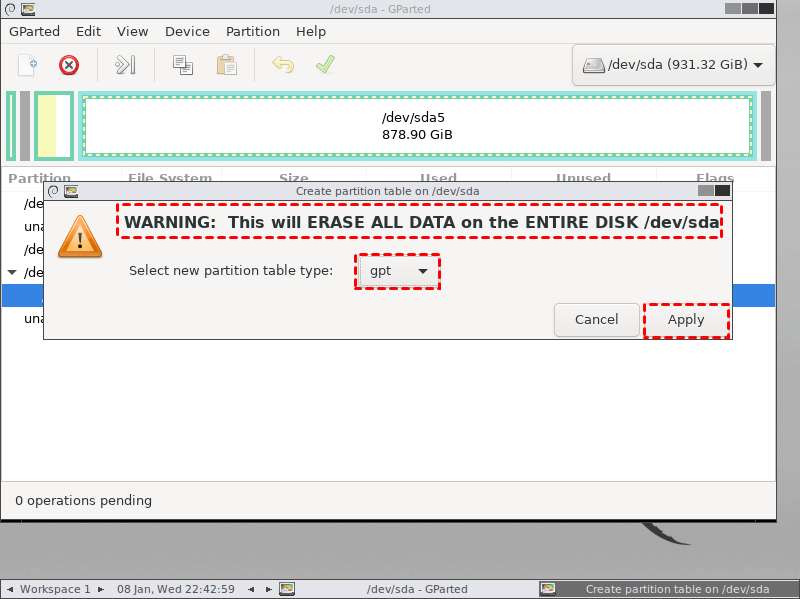 To convert MBR to GPT using GParted without data loss, a backup should be made before conversion. Besides, downloading GParted ISO file and booting PC from the Live CD are indispensable steps to perform MBR and GPT conversion, or other disk partition management under Windows environment.

Therefore, for most ordinary Windows computer users, the operation is somewhat complicated. So here we would like to introduce a better tool (than GParted) to convert MBR to GPT without erasing all data inside and can be performed within Windows (no need to download any bootable files or burn them to a device).

Our recommendation is AOMEI Partition Assistant Professional. This software is compatible with Windows 10/8/7 and Windows XP/Vista (all editions). With it, you can convert either system disk or data disk between MBR and GPT without data loss. Namely, the partitions on the target disk won’t be deleted or erased during the conversion.

Moreover, you don’t need to enter WinPE mode to perform the conversion even if you are converting the boot disk as long as you can boot into Windows as normal. Now, you can follow the steps below to convert MBR to GPT with AOMEI Partition Assistant Professional.

✍ Tips:
● If you are converting MBR boot disk to GPT disk, make sure that your machine supports EFI/UEFI mode. Otherwise, you cannot boot successfully from the disk after conversion.
● To avoid data loss caused by unexpected accidents like power failure, it is always a great idea to back up data before proceeding.

Step 1. Install and launch AOMEI Partition Assistant. You will see your disk(s) on the main interface. Select the MBR disk you need to convert to GPT, right click it and then, select Convert to GPT Disk in the pop up menu. 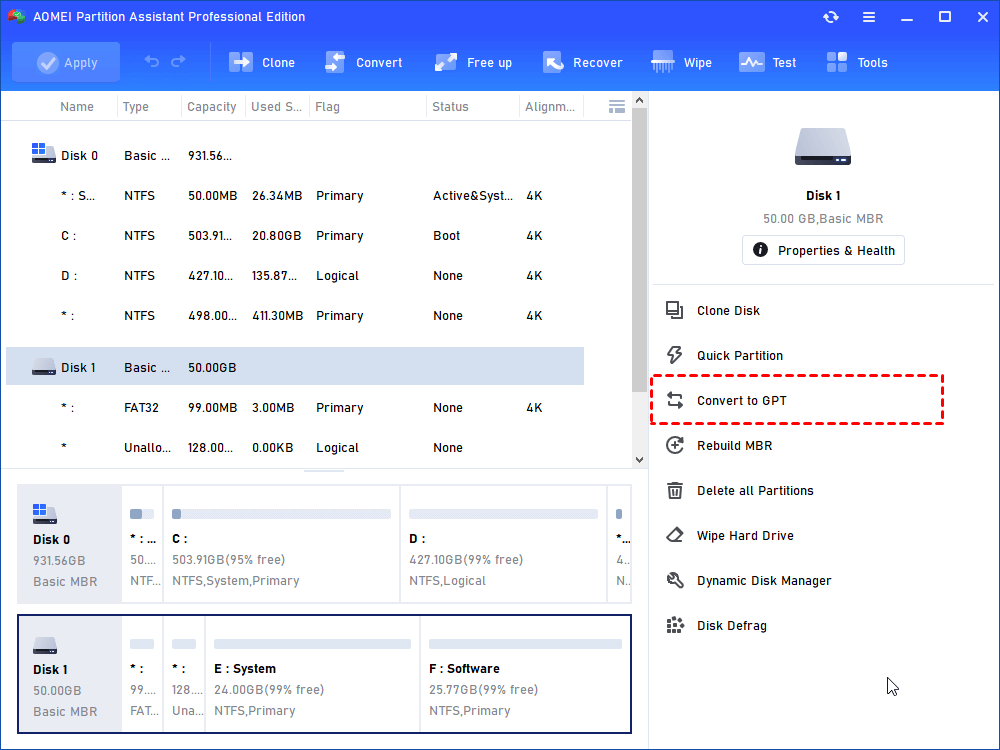 Step 2. It will pop up a window to ask if you are sure to convert the MBR disk to GPT disk. Click OK. 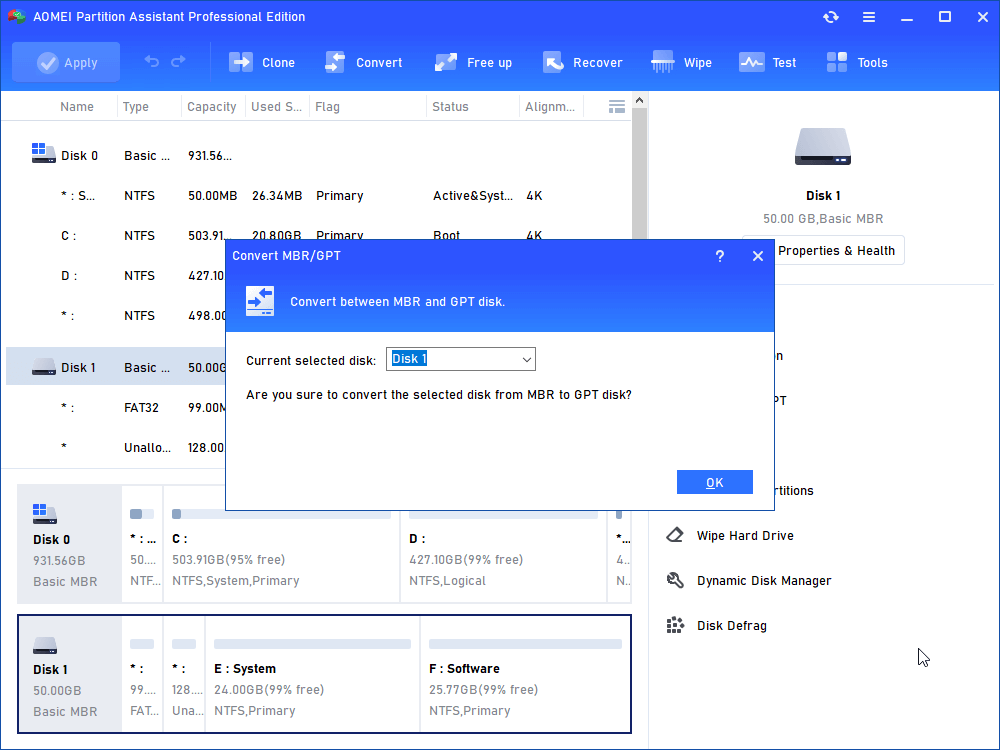 Step 3. You will back to the main interface, and you can see that the disk has already been changed into GPT partition table. Don’t forget to click Apply at the toolbar. 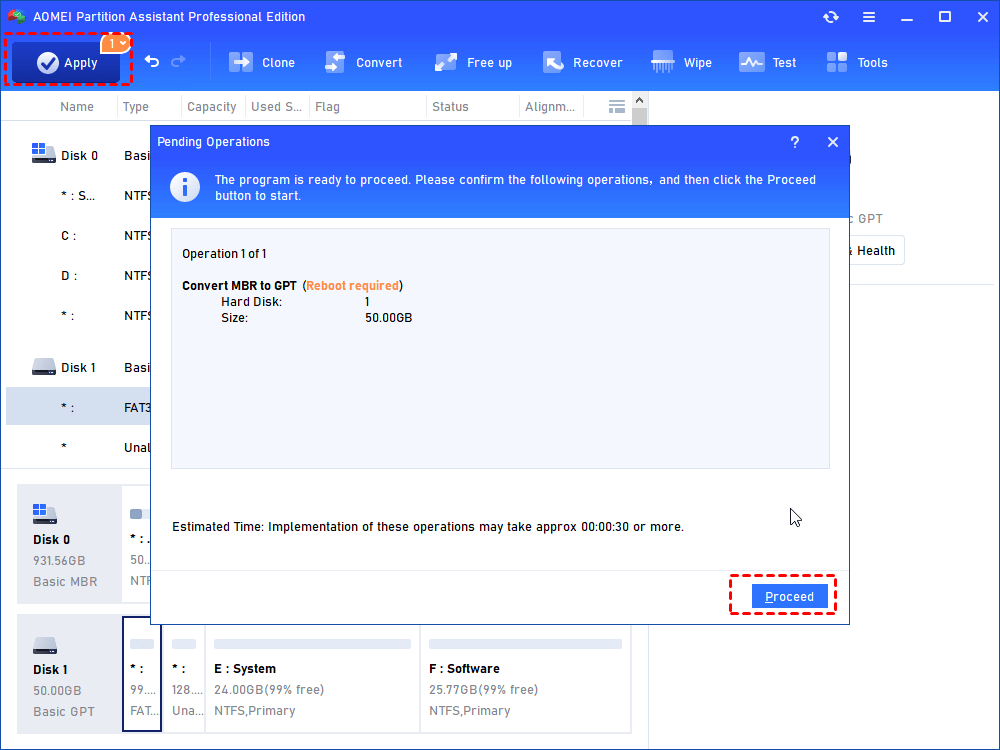 Wait a minute until the conversion is over.

AOMEI Partition Assistant convert MBR to GPT without losing data is such a simple thing. Inverse, you can use it to convert GPT to MBR while keeping old data on the disk. If you need to convert GPT boot disk to MBR disk, make sure your system is 32 bit and your computer supports Legacy BIOS mode.

To convert MBR to GPT without accessing OS, you can first use AOMEI Partition Assistant Professional to create a bootable media on a working computer, then boot the computer, which cannot boot into OS or has not installed OS yet, from the bootable device, then follow the above instructions to convert MBR to GPT, or GPT to MBR.

AOMEI Partition Assistant should be the best alternative to GParted convert MBR to GPT without losing data. With the simple interface, you can do it easily even you are not familiar with computer. AOMEI Partition Assistant also supports other disk partition managements such as migrating OS to SSD/HDD, extending NTFS system partition without a reboot, splitting a large partition into two smaller ones, quickly partitioning a large hard disk, etc.

You May Also Like
Replace GParted to Repartition Windows Server with AOMEI Partition Assistant
Use GParted Windows 10 Alternative to Migrate OS to SSD/HDD
How to Solve GParted Unable to Resize NTFS Partition?