NTFS or exFAT for SSD? Which Format is Better for SSD?

If you don’t know which format is better for SSD, NTFS or exFAT, you can read this article that explains the main difference between NTFS and exFAT. Then you can make a good choice when formatting SSD drive in Windows 11/10/8/7.

Which is better NTFS or exFAT for SSD?

NTFS is the abbreviation of New Technology Files System. It is a relatively newer drive format, introduced by Microsoft in 1993. It has become a common file system for Windows users nowadays. The exFAT is an acronym for Extended File Allocation Table, introduced in 2006; this file system is created to replace FAT32 and be used on flash drives like USB memory sticks and SD cards. It is a middle ground between FAT32 and the NTFS file systems.

Many users don’t know which one to choose: NTFS or exFAT when formatting their solid-state drives. So, which is better NTFS or exFAT for SSD drive? Learning their main difference can help make a smart choice.

NTFS VS. exFAT for SSD drive

Compared with FAT32 file system, the NTFS and exFAT don’t have realistic file-size or partition-size limits. But they have slight differences in the following aspects.

▶Speed
There is no such thing as the fastest file system for all users. For example, a defragmented FAT32 partition is faster than NTFS for simple reads and writes, but NTFS is much faster than FAT32 when there are many files in the directories being read. So, it is hard to distinguish which file system is faster. But many users report that exFAT is slower than NTFS.

▶Compatibility
NTFS can work on all versions of Windows, but it is read-only in Mac and some Linux distributions. Sony PlayStation consoles do not support NTFS and even Microsoft’s own Xbox 360 can’t read NTFS drives, although the new Xbox One can. Other devices are even less likely to support NTFS.
The exFAT is more compatible than NTFS. Mac OS X offers full read-write support for exFAT and it can be accessed on Linux after installing some additional software. Besides, it also works on some other devices like digital cameras that don’t support NTFS. But it isn’t compatible with Microsoft’s own Xbox 360, either, although the Xbox One does. The PlayStation 3 doesn’t support exFAT while the PlayStation 4 reportedly does.

▶Ideal usage
The NTFS can be used on your Windows system drive and other internal drives. When you need more compatibility and want to use more devices smoothly, you should go for exFAT instead of FAT32.
From the brief comparison between NTFS and exFAT, there is no clear answer that which format is better for SSD drive. If you want to use the SSD on both Windows and Mac as an external drive, the exFAT is better. If you need to use it only on Windows as an internal drive, the NTFS is a great choice. So, that “NTFS or exFAT for SSD” mostly depends on your own requirements.

3 Steps to format SSD to NTFS or exFAT

Now, you can learn how to format SSD to NTFS or exFAT. This is quite simple. You can open Windows Disk Management, right-click the SSD drive, choose “Format...”, select NTFS or exFAT on the pop-out window and click on “OK” to format the SSD to the desired file system. However, you might find there is no exFAT option. According to Wikipedia, exFAT can be used where NTFS is not a feasible solution (due to data structure overhead). When you format a partition on a hard drive, the exFAT won’t appear. However, it will be available if you format a USB flash drive or SD card.

To solve this problem, you can turn to CMD.exe tool and run “format F: /fs: exFAT” (where F is the drive letter of the SSD drive you want to format) and press Enter. Type: Y to confirm your operation. Besides this solution, you can use the free partition manager: AOMEI Partition Assistant Standard. This freeware can format the internal or external hard drive to both NTFS and exFAT. Moreover, the Ext4/Ext3/Ext2 Linux file systems are also available for your selection. Only 3 clicks will do it. 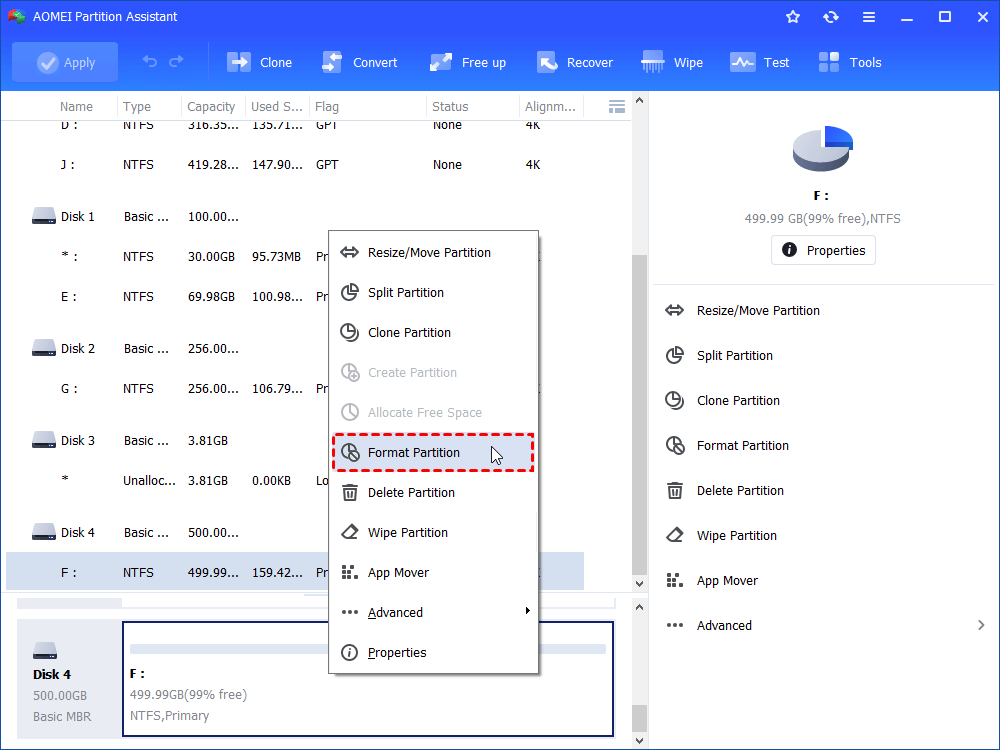 Step 2. Next, you can choose exFAT or NTFS as the target file system. 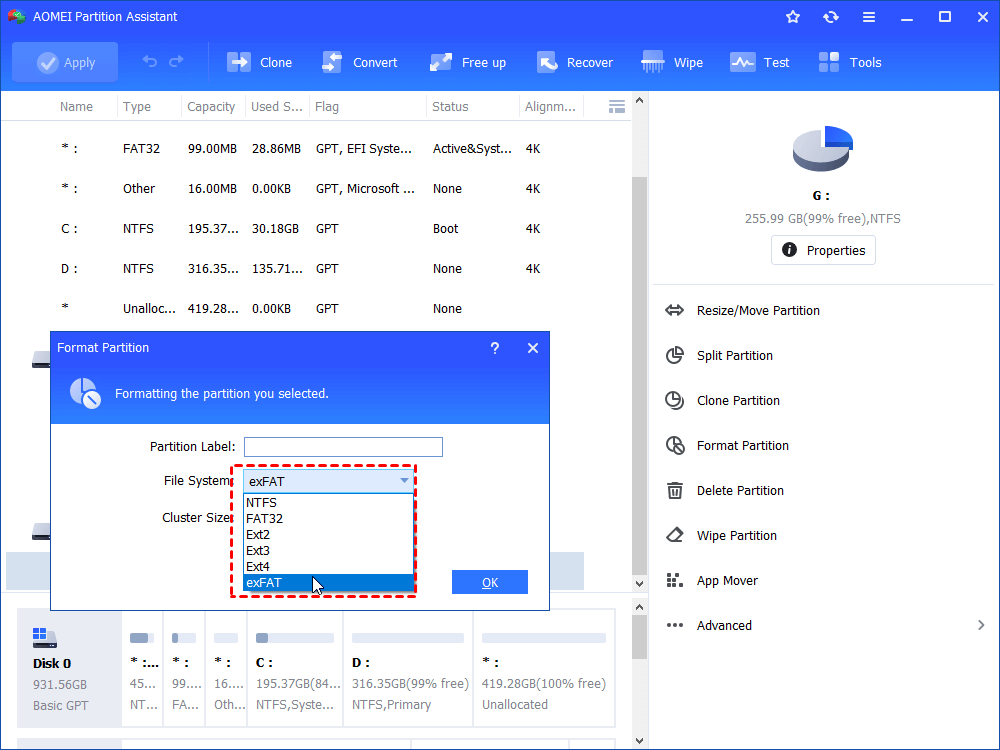 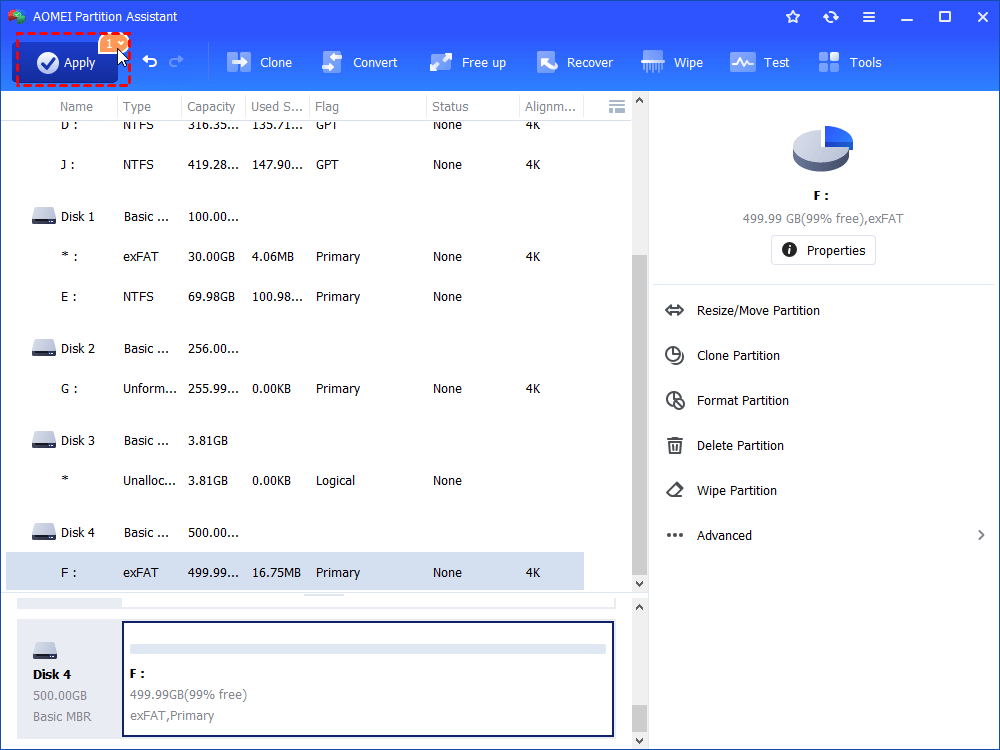 Then wait for the process to finish.

Now, you should know which is better NTFS or exFAT for SSD in Windows 11/10/8/7 and how to format it to the proper file system successfully. It is no doubt that AOMEI Partition Assistant Standard is a powerful partition manager to help solve many formatting problems. It is also capable of formatting 2TB hard drive to FAT32, formatting corrupted hard drive, formatting write-protected disk and more.

You May Also Like
MBR VS GPT: Which one is better for SSD?
Copy exFAT Partition to another Drive in an Easy and Safe Way
Solved: exFAT Drive Not Recognized in Windows 10