How to Remove Drive from Raid 5 without Data Loss?

What’s the best way to remove drive from RAID 5? Since there is not any Windows’ inbuilt feature to help with it, this time, I will introduce a powerful app to perform this operation within only a few clicks.

I’ve configured a RAID 5 on 4 disks and all I want to do right now is to remove 1 of those disks so that I can use the 4th one as a hot space. Any way to do this without deleting the disk group?

Why remove drive from RAID 5?

RAID 5 is a redundant array of independent disks configuration using disk striping with parity. Because data and parity are striped evenly across all of the disks, no single disk is a bottleneck. Meanwhile, striping allows users to reconstruct data in case of a disk failure. RAID 5 also contains following advantages,

2. Data can be accessed and read even while a failed hard drive is being rebuilt.

3. Raid 5 can tolerate a single drive failure because when a drive fails, the system is able to read the information contained on the other drives and recreate that data.

Can I remove drive from RAID 5 array via Disk Management?

When you hear about removing hard drive from RAID 5, I believe, the first thing you think of must be Windows’ inbuilt tool Disk Management, right? Of course, you can use this program to perform the removing operation, but it’s a little bit complicated.

To remove drive from RAID 5 array via Disk Management, first, you have to back up RAID 5. Then, you’re going to delete a volume from RAID 5. However, after finishing this step, the entire RAID 5 will be removed. Don’t worry, the next thing you’ll do is to right-click on the created unallocated space and select “New RAID 5 Volume” to reconfigure RAID 5! This time, remember to set 1 less volume for RAID 5 and restore the backup. 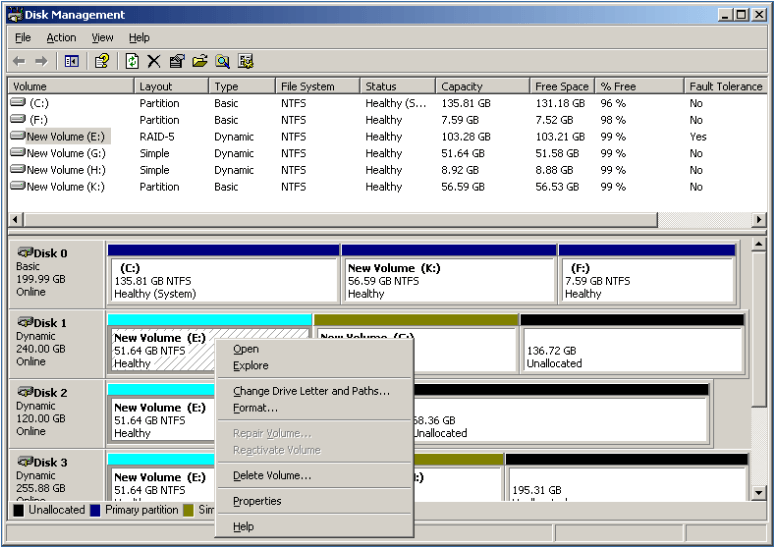 Software to remove disk from RAID 5 without data loss

As you can see from the above content, Disk Management doesn’t deserve to be called an ideal way to remove a disk from RAID 5 for its great inconvenience. To make it easier, I’ll introduce a brand of third-party software – AOMEI Partition Assistant Server that is compatible with both Windows and Server– to help remove one disk from RAID 5 directly        without any data loss. More than this disk removing feature, the software also supports converting dynamic disk to basic, delete partition, and wipe hard drive.

How do I remove a disk from RAID 5? Just download and try the demo of the most powerful disk management software.

Step 1. Install and launch AOMEI Partition Assistant Server. Then, all disks and partitions on your computer will appear on the main interface.

Step 2. On the left side, click on “All Tools”. After that, select “Dynamic Disk Manager”.

Step 3. Select “Remove Drive from RAID” from the left. In the popup wizard, hit “Next” to proceed. 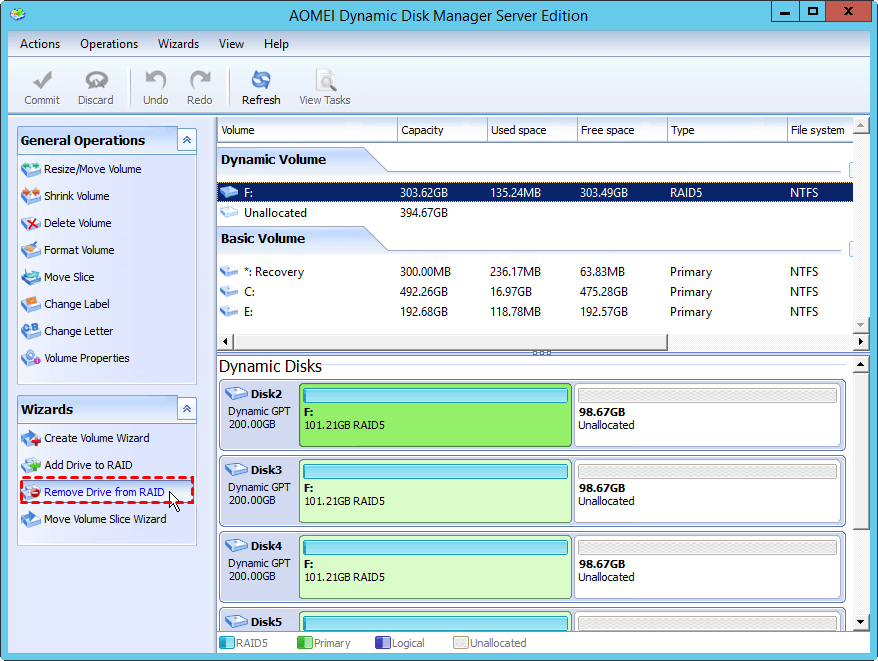 Step 4. Select a RAID volume you want to shrink and hit “Next”. 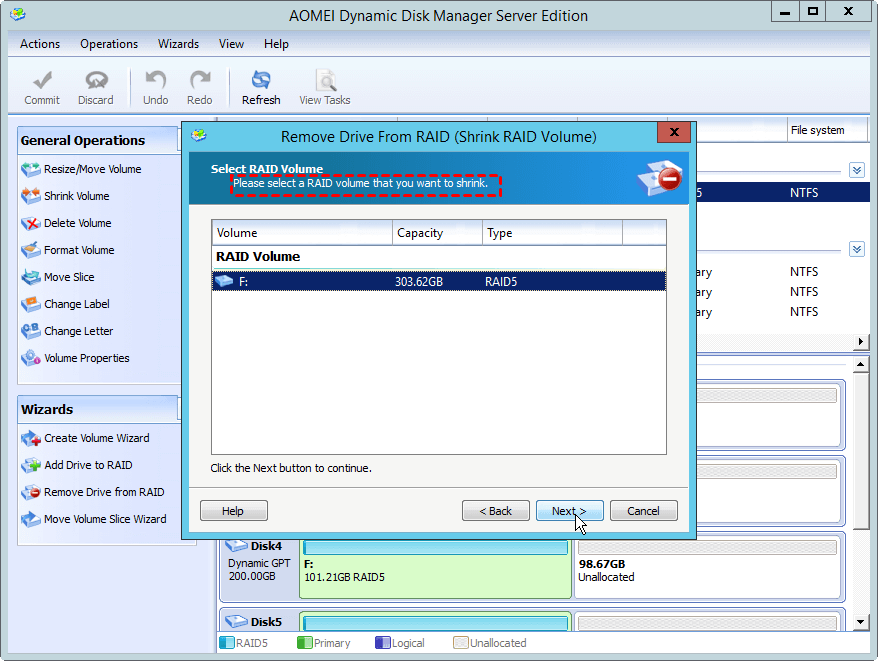 Step 5. Select the drive that you want to remove from the RAID volume and hit “Finish”. 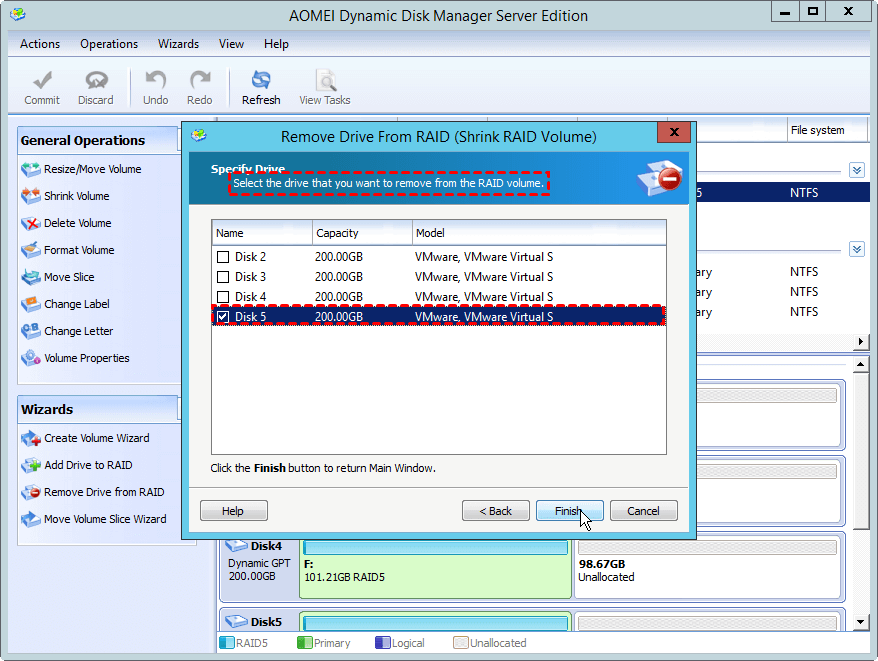 Step 6. Click con “Commit” on the upper left to start the removing process. 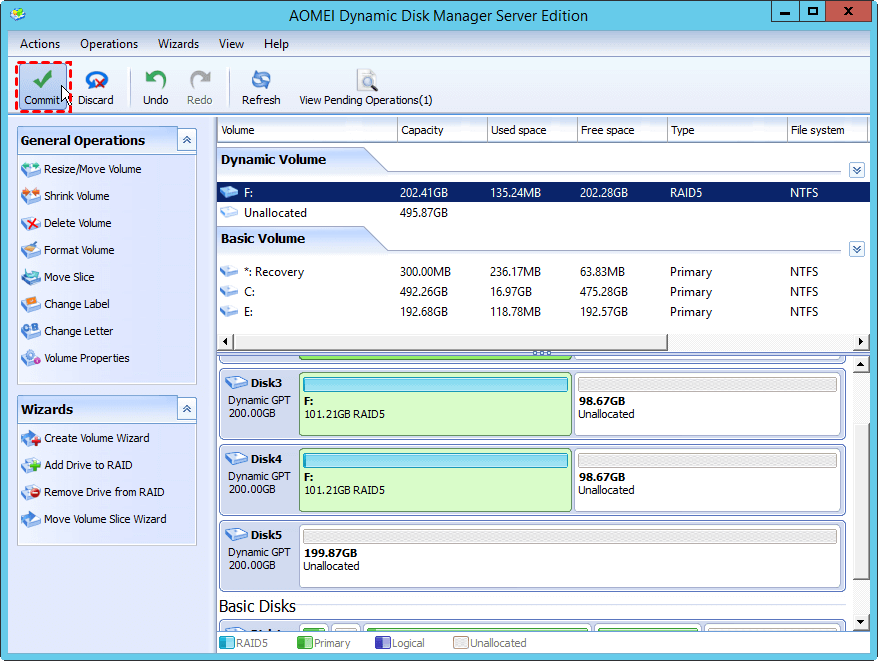 It just takes several seconds before completing. So, be patient.

Basic knowledge: what happens when hard drive fails in RAID 5?

Thanks to parity, information and all data are available in case one of the disks fails. If extra disks are available, then, reconstruction will start right away after the failure of the device. However, if there are 2 disks failing simultaneously, all data will be lost. In short, RAID 5 can make it through when there is just one disk failing, but not 2 or more.

How to remove drive from RAID 5? Many people hope to perform this operation for different purposes but have no idea how to get it done. So, in this article, I introduced the most powerful disk management software on market and walked you through the process step by step. Hopefully, it’s no longer a problem for you. If you wish to provide billable technical services to clients, you might as well try the software’s Technician edition.