How to Set Up Software RAID in Windows Server?

If you need to setup software RAID 1 and RAID 5 to solve the risk problem of server data storage, here comes the tutorial on how to configure software RAID on Windows Server 2008/2012/2016/2019 step by step.

RAID is a technology that allows a volume (partition) uses together with the space on the multiple disks, in this way, disk's utilization and system performance can be improved. There are a variety of different types and implementations of RAID, each with its own advantages and disadvantages. In the IT world, hardware failure does not occur often, but in the event, the running server may lose large amounts of important data. How to protect server data? Many users choose to use RAID to deal with the risk of hardware failures. Usually, RAID 1 and RAID 5 are widely used to solve the risk problem of server data storage.

Hardware RAID can be implemented by requiring high hardware requirements, in the form of special disk controllers, but also needs computer motherboard support. This means it takes a high cost to set up hardware RAID. Software RAID is well supported by the operating system, which is implemented by OS kernel module, and no required extraordinary hardware. It is the best choice for common personal users and server users. Usually, Windows Professional Edition and Windows Server Edition systems can support it. It is a trend, and you can flexibly set up software RAID via Windows Disk Manager.

How to set up software RAID 1 step by step?

RAID 1 is usually implemented as mirroring, is a fault-tolerant volume that duplicates data on two different physical disks. Software RAID 1 is supported on dynamic disks and provides data redundancy by using two identical copies (mirrors) of the volume. If either drive fails, the other continues to work as a single drive until the failed drive is replaced. Conceptually simple, RAID 1 is popular for those who require fault tolerance and don't need top-notch read performance. 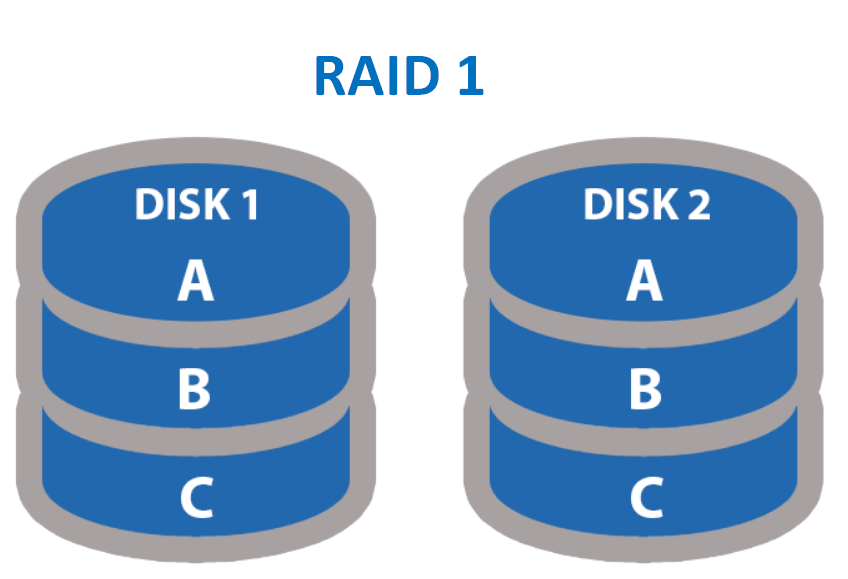 You can accomplish RAID 1 configuration on Server 2000/2003/2008/2011/2012 and Windows 7/8 Ultimate Edition, except for Windows 2000 Professional, XP, and Vista. However, you can use a computer that is running XP Professional to setup mirrored volumes on remote computers that are running Windows 2000 Server, Windows 2000 Advanced Server, or Windows 2008 Datacenter Server, or the equivalent versions of Windows Server 2003.

At the same time, the implementation of software RAID1 is based on two dynamic disks. One stores the data which is being used, and another keeps a copy of the previous one. If your disks not dynamic, please see "Regarding Basic Disk convert to Dynamic Disk" for more information. To set up software RAID, do as following:

1. Open Server Disk Management. Right-click one of the volumes on the dynamic disk and select the "Add Mirror". 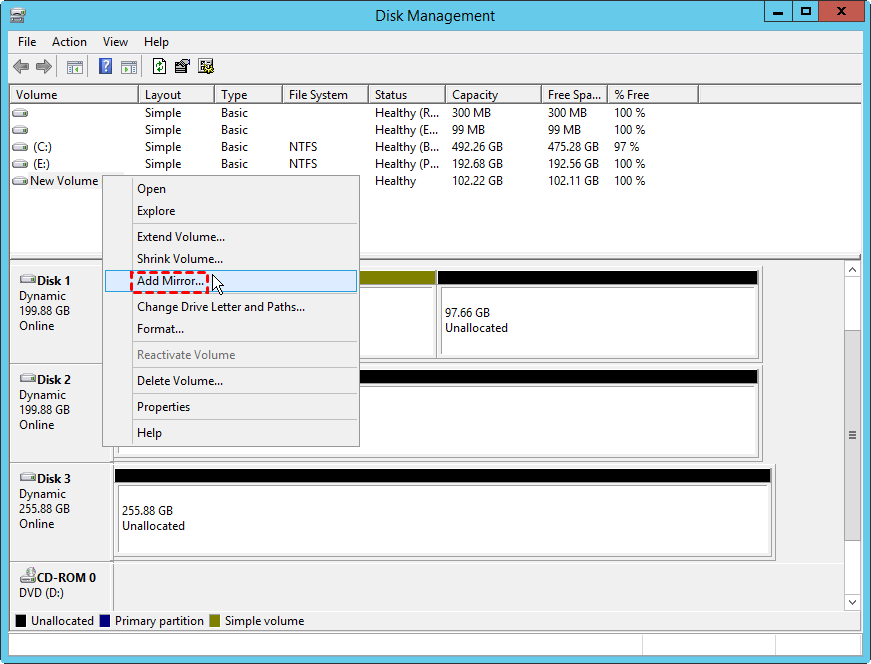 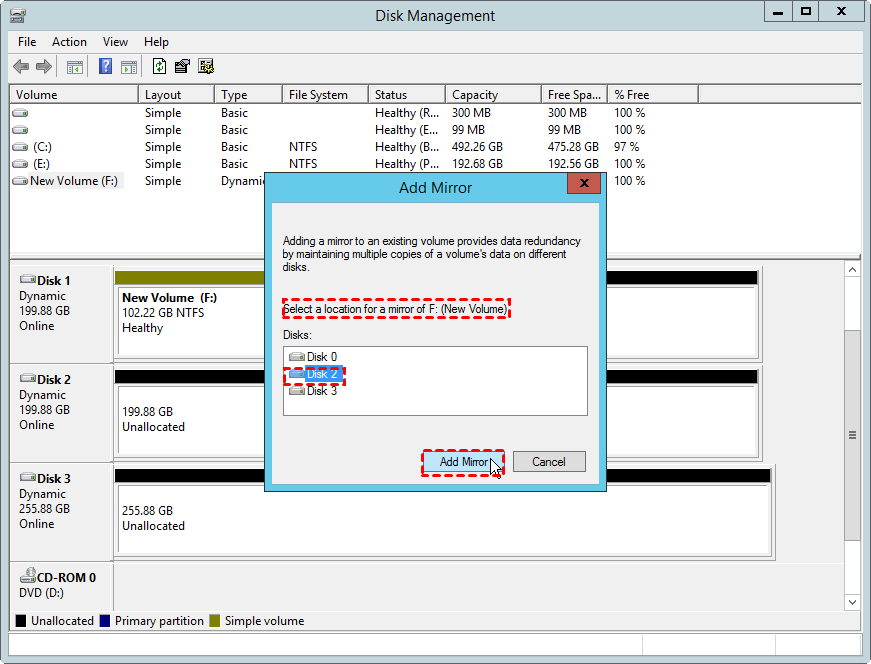 3. After completing, you will see the following screen. 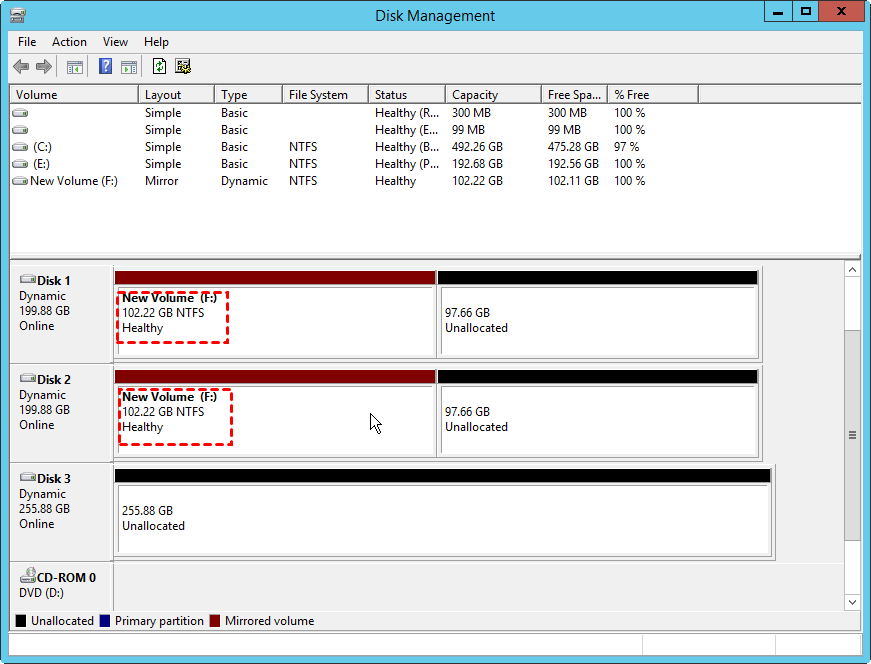 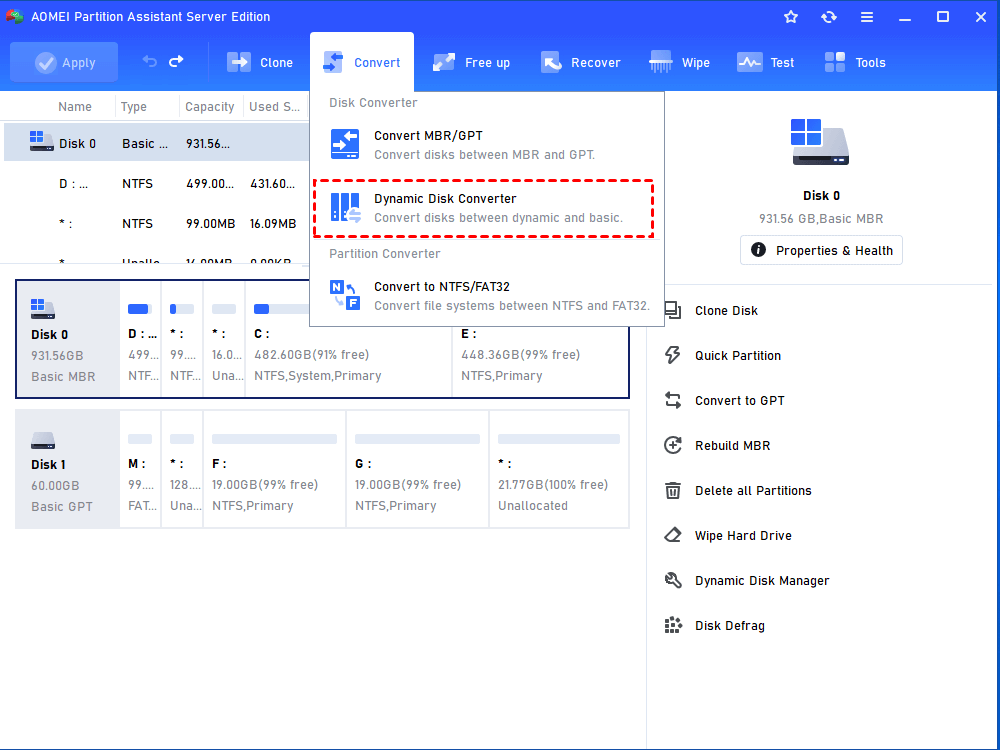 How to set up software RAID 5?

A software RAID 5 requires three disks at least; it not only can enhance the efficiency of the disk but also provide the best fault-tolerant. A RAID 5 is a fault-tolerant volume in which the data is striped across an array of three or more disks. Parity (a calculated value that can be used to reconstruct data after a failure) is also striped across the disk array. If a physical disk fails, the portion of the RAID 5 that was on that failed disk can be recreated from the remaining data and the parity.

The following is how to set up software RAID5. 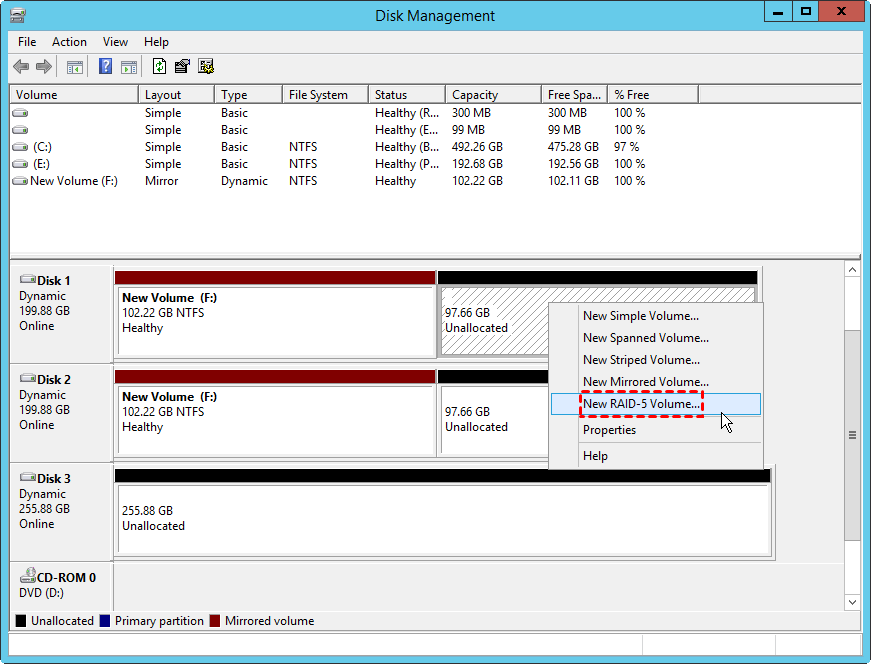 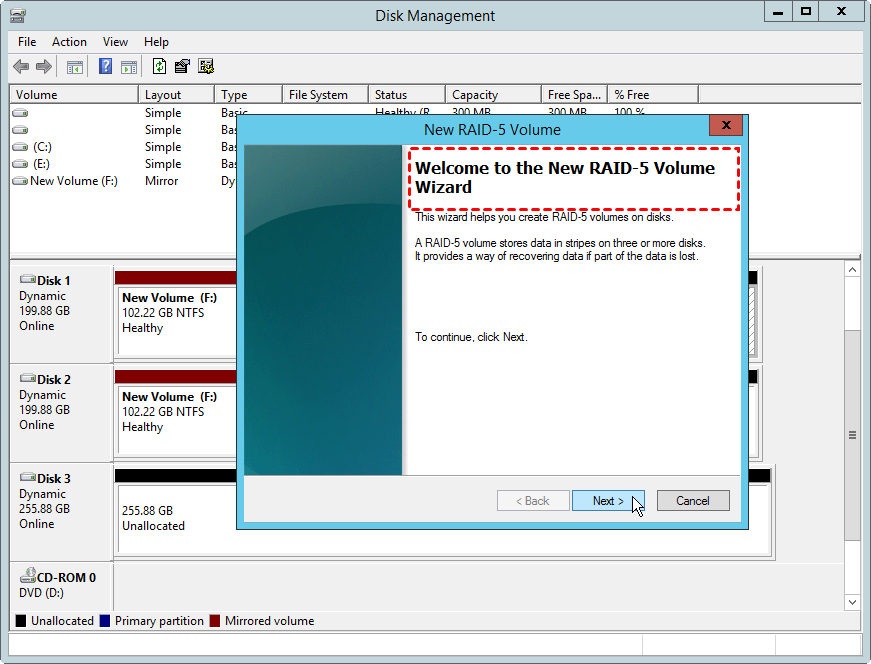 3. Then select the disks you want to use for creating RAID-5 volumes, and click on “Next”. At least 3 disk will be required. 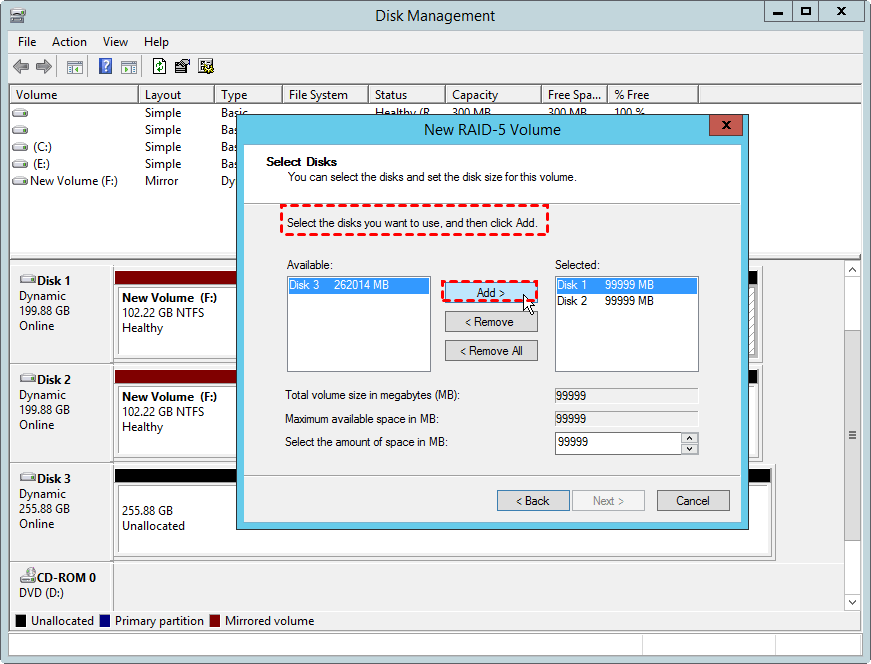 4. Now, you can assign a drive letter to the RAID 5 volume and format the volume and click on “Next”. 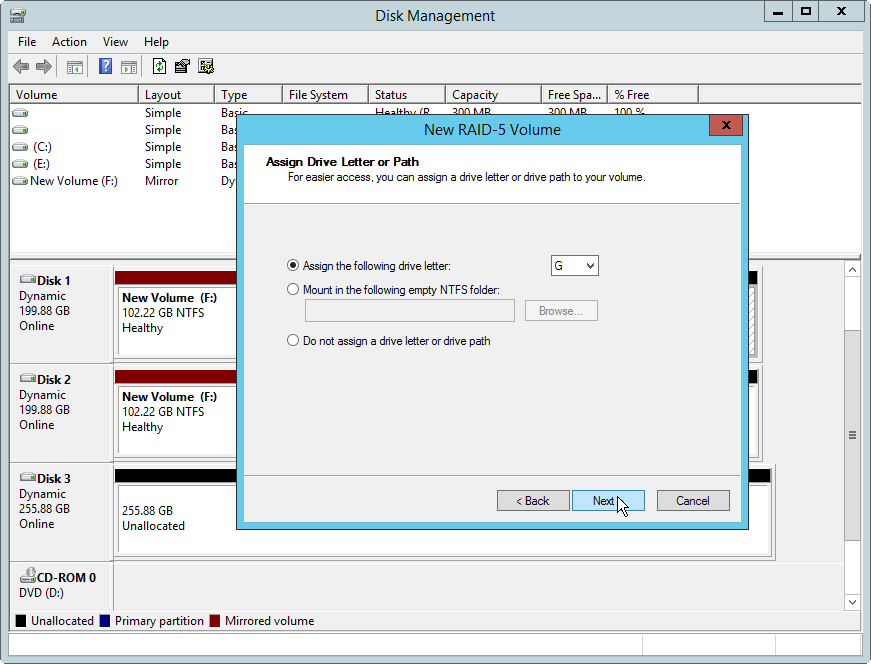 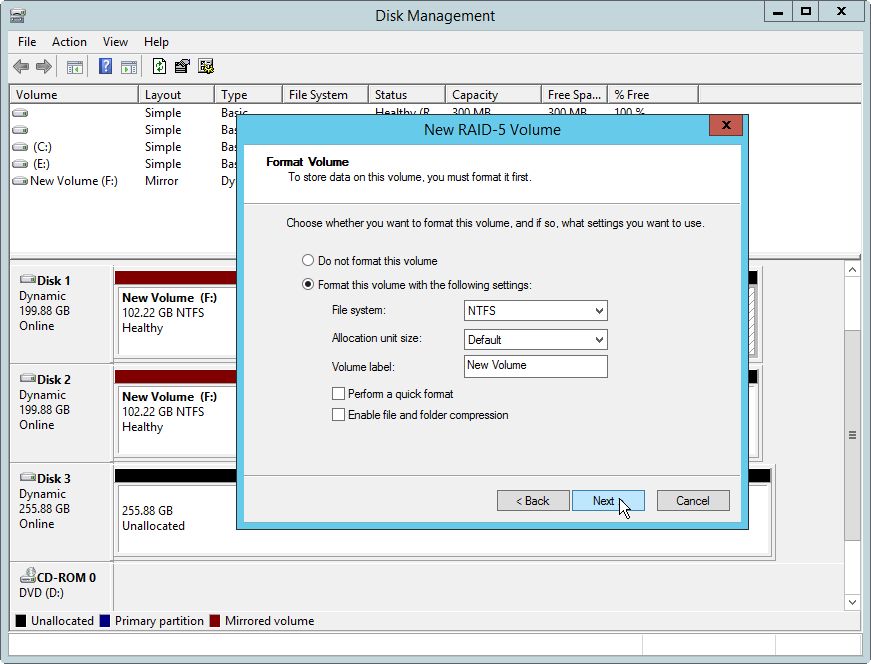 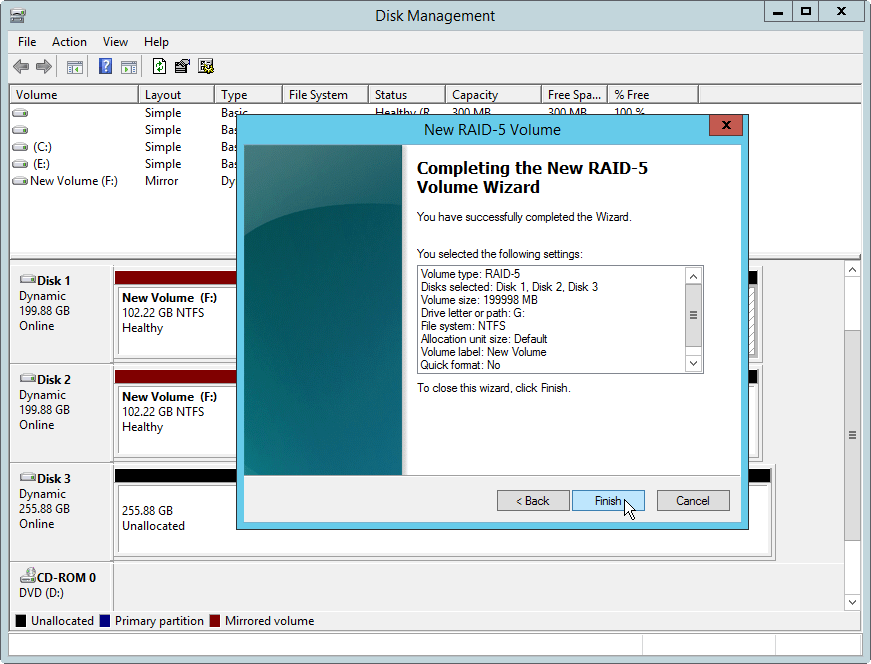 The following table describes the support case of software RAID in each Windows.

You May Also Like
How to Remove Drive from Software RAID 5 in Windows Server without Data Loss?
How to Add Drive to RAID Without Losing Data?
How to Expand Raid 5 Volume without Losing Data? (Two Methods Offered)