How to migrate Windows OS from GPT disk to MBR SSD and successfully boot Windows from the MBR SSD in Windows 10/8/7? Here comes the best solution.

"Hi, experts! Recently I was planning to clone my system drive from GPT disk to another MBR SSD. So I was wondering do I have to convert MBR SSD to GPT first of all? Or do you guys have any other great suggestions on how to migrate OS from GPT disk to MBR SSD directly without changing disk style?”

Why migrate OS to MBR SSD from GPT disk?

Although GPT comes with some obvious advantages over MBR disk, like allowing you to create up to 128 primary partitions, supporting over 2TB disks, and more, some people still want to migrate OS from GPT disk. As we know, SSD might offer a smaller disk capacity compared to HDD of the same price.

Most computer operating systems are installed on hard disk drives (HDD) which may be large and initialized to a GPT disk. Due to the price factor, the newly purchased SSD perhaps has less than 2TB capacity and is initialized to an MBR disk. To experience better performance, faster-booting speed, and decreased program loading time, users would like to migrate OS to MBR SSD from GPT disk in Windows.

How to Migrate OS from GPT to MBR SSD

When it comes to migrating or cloning Windows systems from one disk to the other, a cloning software or system migration tool would be a great help, since you cannot move OS directly using Windows built-in tools. AOMEI Partition Assistant Professional is such a program that has the “Migrate OS to SSD” feature, allowing you to migrate the operating system to a new hard disk or a speedy new SSD without reinstalling everything. This software comes with a clean and user-friendly interface, making it quite easy to use, even for computer novices. And it works well on Windows 11,10, 8/8.1, 7, XP, and Vista.

★Note:
GPT works well with Extensible Firmware Interface (EFI) or the Unified EFI (UEFI). And MBR works with older and simpler firmware Basic Input/Output System (BIOS). Therefore, after you switch from GPT to MBR, do not forget to change boot mode simultaneously.

Step 1. Click Migrate OS to SSD in the left Wizard pane. A dialog states this operation information pops up later. Click Next to continue. In the first place, connect the MBR SSD to your computer. It can be connected via an external disk enclosure or USB-to-SATA cable. Install and run AOMEI Partition Assistant. This tutorial will take migrating Windows 7 from GPT to MBR for example. 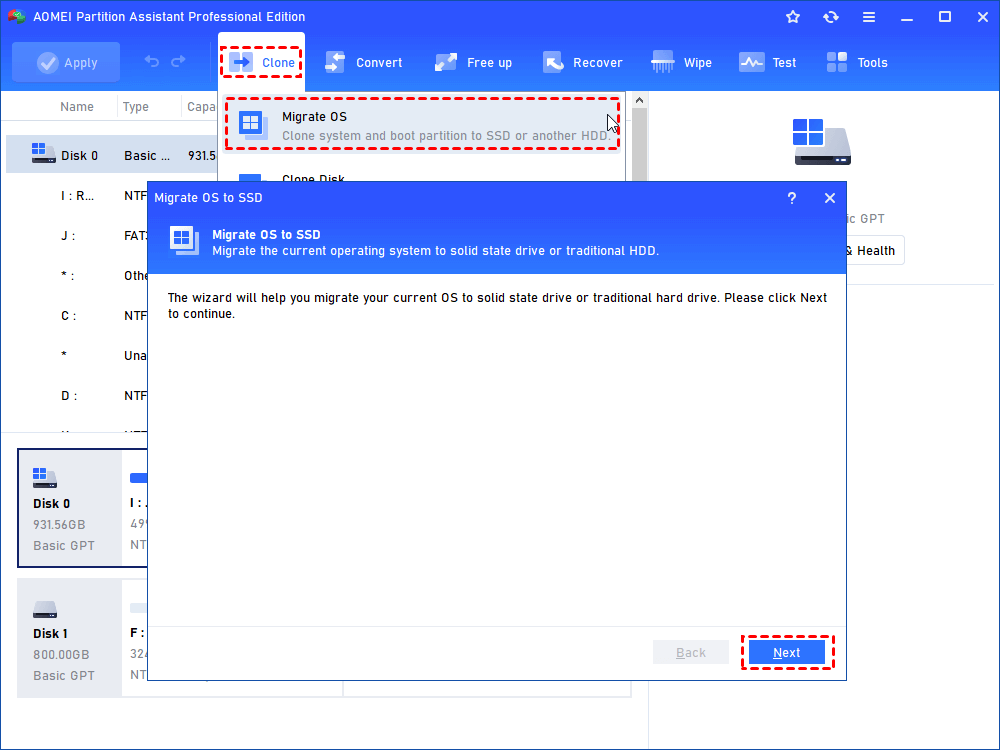 Step 2. Choose the SSD as the destination space. Remember to check the box “I want to delete all partitions on this disk 2 to migrate system to the disk” and click Next. 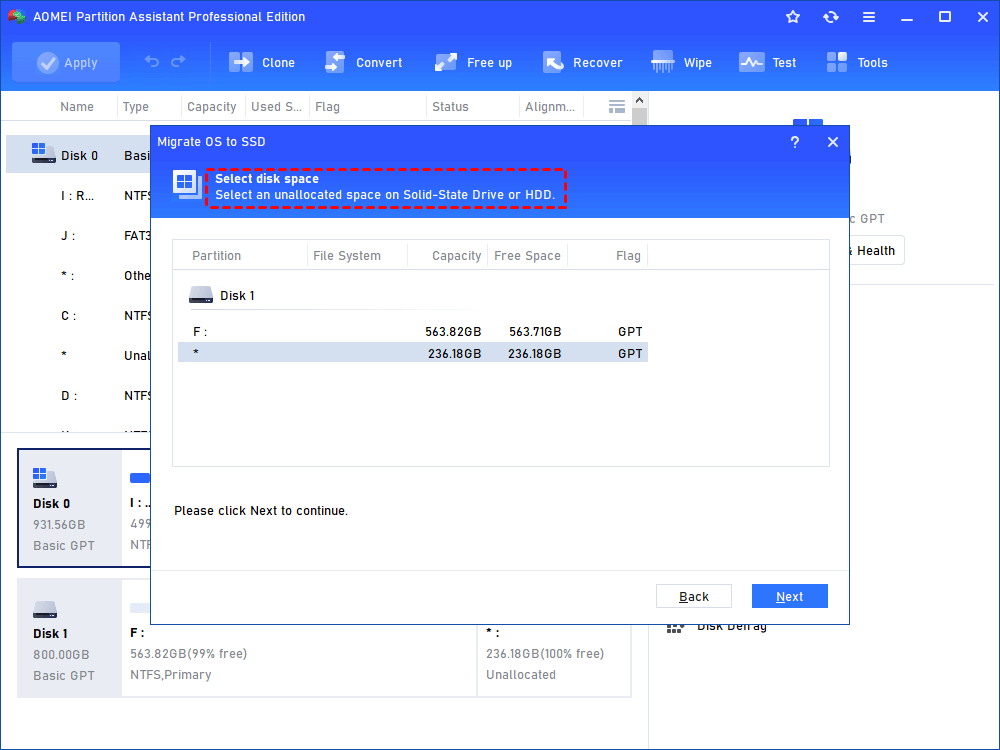 Step 3. You’re allowed to resize the system partition before migrating. The drive letter can be reassigned manually. 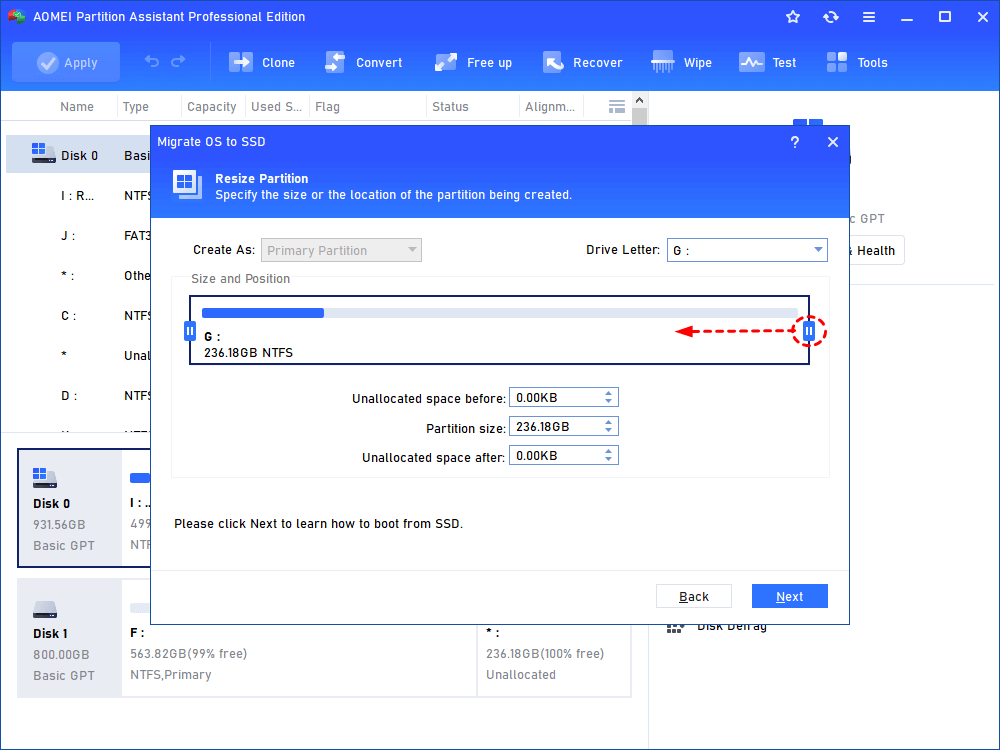 Step 4. There is a Note on how to boot OS from destination disk maybe you want to bear in mind. 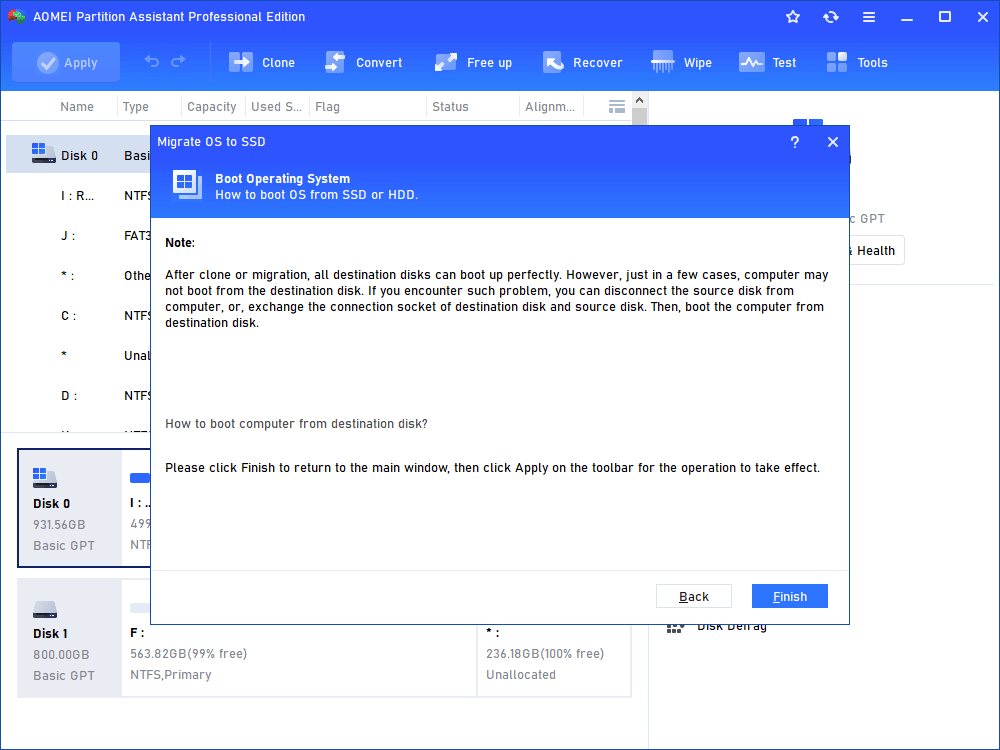 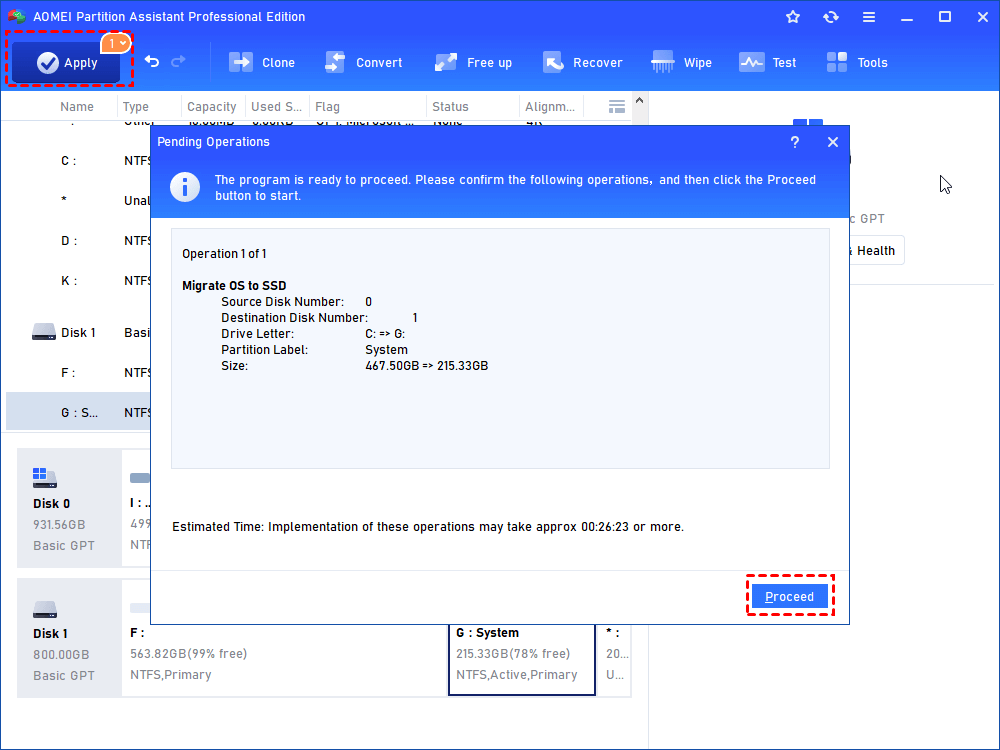 Step 6. Shut down your computer if the migration finishes. Press F2, Del, F8, or other specific keys to enter BIOS. You need to alter two settings here, boot priority and boot mode. Change boot priority to cloned MBR SSD and switch from UEFI to Legacy. Then press F10 to save change and exit.

Notes:✎...
The destination MBR SSD will be overwritten. Back up files that matter a lot to a safe place beforehand.
This process needs to be completed in Windows restart mode.
By default, this program will copy only the used section of the source disk to the target disk. So, you can also migrate OS from a larger drive to a smaller one as long as the used part fits.

If the OS drive on the GPT disk is larger than 2TB, the process will fail because the MBR disk supports less than 2TB of storage. You can shrink volume/partition first and then try again.

Only in five steps can you easily migrate Windows OS from GPT disk to MBR SSD with the help of the powerful partition tool. As a matter of fact, except for switching from GPT to MBR, this software allows you to transfer OS from GPT to GPT disk as well. In addition, the conversion between MBR and GPT in this tool makes it a great alternative to GptGen.

You May Also Like
Legacy VS UEFI VS Legacy+ UEFI：Which One Should You Choose?
How to Migrate OS from MBR Disk to GPT SSD without Changing Partition Style?
Clone MBR to GPT SSD or HDD Safely and Quickly