In this article, we will provide the basic information about MBR, GPT, legacy, UEFI, and demonstrate how to make conversion from MBR to GPT and BIOS to UEFI.

Can I convert MBR to UEFI?

Many users wonder whether if they can convert disk to UEFI. Strictly speaking, it is not possible to change MBR to UEFI, because MBR is a partition table, and UEFI is a boot mode. They are two totally different things.

MBR (Master Boot Record) that is used to describe how and where the disk information store. If the MBR is corrupted, the OS can't be retrieved by your computer. And the other partition table is GUID partition table (GPT), which is newer and better for many circumstances.

Note: You can get more information from "What's the Difference Between MBR disk and GPT Disk?".

While the UEFI (Unified Extensible Firmware Interface) is a specification that defines a software interface between an OS and platform firmware. In a nutshell, UEFI is a new boot mode to start up a computer.

And usually, MBR disk + BIOS boot mode, and GPT disk + UEFI boot mode are the most common combinations. Next, we will give you more details of MBR and GPT, BIOS, and UEFI and demonstrate how to convert MBR to GPT and change BIOS to UEFI.

Legacy BIOS is a very important firmware that is used to initialize hardware on your PC during the boot process. And a computer won't be started successfully until the BIOS activate all the necessary components for booting up.

After decades of service, Legacy BIOS is gradually replacing by the new firmware-UEFI (Unified Extensible Firmware Interface), which is easier to use. UEFI is much better than Legacy BIOS in many attributes.

● Better compatibility：UEFI works well with the newer partition table, GPT while BIOS cannot support Windows booting from a GPT disk.
● Larger capacity support: UEFI mode allows you to use a disk with a large capacity while BIOS cannot support a disk more than 2TB.
● Faster speed: The UEFI boot process is faster than BIOS. UEFI directly boots the operating system and saves the BIOS testing process. And the BIOS will wake up the hardware firstly, and then load bootloader to initialize Windows.

Why need to convert MBR to UEFI?

You have known the difference between BIOS and UEFI, there are brief introductions about MBR and GPT. They are different partition table formats, and GPT is the successor of the MBR, so it comes with lots of benefits over MBR:

✦ GPT supports a disk larger than 2 TB in size while MBR cannot.
✦ A GPT disk supports volumes up to 18 exabytes and 128 partitions per disk while the MBR disk supports 2 terabytes in size and 4 primary partitions at most.
✦ GPT partitioned disks have redundant primary and backup partition tables for improved partition data structure integrity.
✦ According to the official news from Microsoft, Windows 11 only supports UEFI boot mode. Thus, if you want to upgrade your Windows 10 PC to Windows 11, you'd better convert your MBR system disk to a GPT disk.

Although UEFI can support MBR disk, MBR plus BIOS, GPT work with UEFI are better for you if you want better use of disk, and break the limit of 2TB. Next, we will show you how to convert MBR to GPT and convert legacy BIOS to UEFI.

How to convert disk to GPT for UEFI boot mode

Before converting MBR(Legacy) to GPT(UEFI) you need to check if your PC supports legacy BIOS and UEFI: 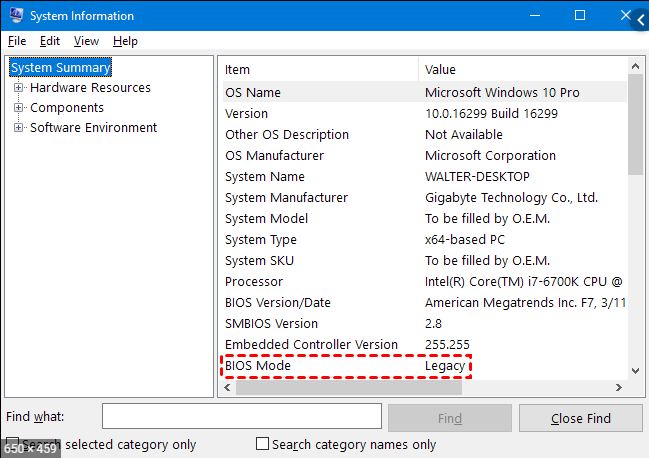 ▶ Convert MBR to GPT with an installation CD (Data loss)

If you have an installation CD, you can convert MBR to GPT with Diskpart.

1. Insert the installation CD into your computer, and boot the computer from the CD

In the Diskpart Window, input the following commands and execute them one by one. 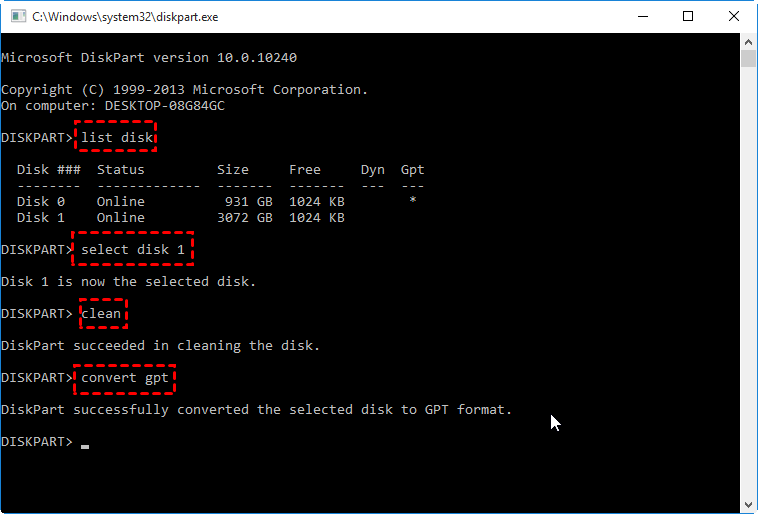 Diskpart is a good way to convert files system for computer experts. But you may don’t have an installation CD. Moreover, it will erase all data on the disk, and it is complicated for a novice. An unexpected mistake probably would bring about some issues, since the operation can’t be revoked.

Fortunately, there is a great tool - AOMEI Partition Assistant Professional for you. With this software, you convert MBR to GPT without reinstalling Windows system and deleting partitions/data loss. Let’s see the specific steps. You can download the Demo version to see how to convert disk to UEFI.

Step 2. Ensure you have converted Legacy BIOS to UEFI, and click “Yes” to confirm.

Step 3. In the main interface of AOMEI Partition Assistant, click “Apply” to start the conversion.

And wait for the operation to complete. After that, you can go to "This PC” and open the “Properties”, and you will see the partition table has become to GPT.

After converting MBR to GPT, follow the steps to change BIOS to UEFI.

1. Start your computer and press the functional key (generally, it is F1, F2, F3, F10, or F12, ESC) to enter the firmware interface when you see the first screen. The functional key is different from computers to computers. If you can’t find it, you can refer to the instruction booklet or Google it.

2. Under the BOOT tab, choose the UEFI/BIOS Boot Mode, and change the Legacy to UEFI. Then save and exit the firmware interface.

This is all about how to convert MBR to UEFI. I hope you have a great experience with GPT disk and UEFI firmware. In addition, with AOMEI Partition Assistant, you can also convert file system from FAT to NTFS without formatting, fill hard drive with random data, migrate OS from MBR to GPT disk or GPT to MBR.

If you are a Windows Server user, you need to use the AOMEI Partition Assistant Server Edition to convert MBR (Legacy) to GPT(UEFI).

You May Also Like
Upgrade BIOS to UEFI Before You Want to Convert MBR to GPT
How to Copy MBR from One Disk to Another in Windows 10/8/7?
How to Create a Windows 11 to Go USB