If you try to run a P2V (Hyper-V) conversion on a Windows Server 2012 R2 with UEFI but failed, you can try to convert VHDX GPT to MBR to fix the problem.

Recently, I need to convert a physical Windows Server 2012 R2 server to a virtual machine. I downloaded the Micro Virtual Machine Converter and ran through the progress to start the P2V conversion. It took a few hours. But when I got to the very end of the wizard, it gave me an error like the following:

“Microsoft Virtual Machine Converter encounter an error while attempting to convert the virtual Machine. Details: There are blocking issues for the physical-to-virtual conversion: There is no BCD boot device found in the source machine, noting that the conversion of an EFI boot machine is currently not supported.” 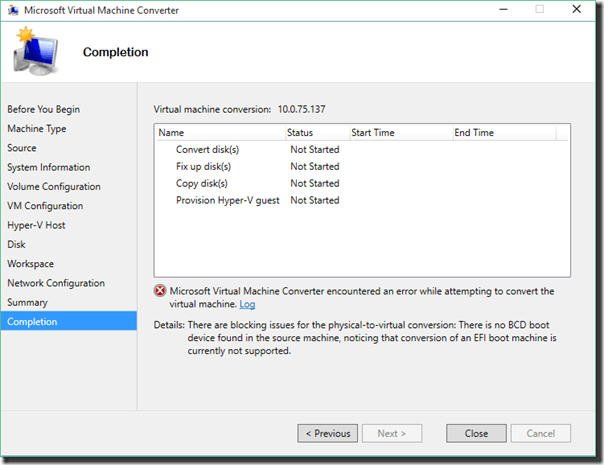 When you check the whole operation, you haven’t found any reason that would cause the error while attempting to convert the virtual machine. Well actually, you should concern whether you server was configured with UEFI when it was deployed. Cause the Virtual Machine Converter does not support P2V conversion for UEFI computer with GPT disks.

For this situation, you need to convert the physical disk to VHDX first with the Sysinternals tool from Microsoft called Disk2vhd. You can download this tool and run it. Set the location where you want to store the VHDX file, click Create. 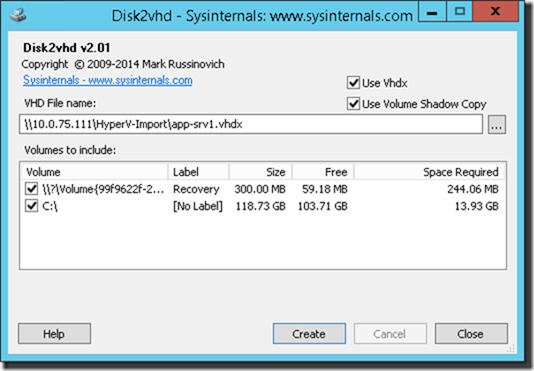 After the progress completes, you need to convert the VHDX GPT to MBR.

Convert VHDX from GPT to MBR may help you fix the P2V conversion error: There are blocking issues for the P2V conversion: There is no boot device found in the source machine, noticing that the conversion of an EFI boot machine is currently not supported.

Take the Windows 10 computer as an example. Right click the VHDX, choose Mount to mount the VHDX file.

Mark the drive letter that is assigned to the disk after it is mounted. Here is H:\.

After it completes, remember the drive letter of the mounted VHDX file, and use AOMEI Partition Assistant to convert VHDX from GPT to MBR as the following steps:

Step 1. Free download AOMEI Partition Assistant, install it to your Windows PC, and launch it.

Step 2. It will display you its main interface contain the basic situation of your disks including the VHDX GPT drive. Right click it, select Convert to MBR Disk.

Step 3. It will pop up a window with warning messages, you need to read it and click OK.

Step 4. You will back to the main interface and you will see the VHDX GPT has already changed into MBR. But it’s not done, you need to click Apply at the toolbar to execute the task.

After convert VHDX GPT to MBR, you should disconnect from the VHDX file in File Explorer. Right click the mounted VHDX file, select Eject from the pop-up menu.

Next, you can create a new VM in Hyper-V Manager. During this operation, you need to make sure that you choose a Generation 1 VM, instead of creating a new VHDX file, attach the file that was generated by Disk2vhd that we’ve edited.

You will meet a black screen with a blinking cursor but never boots into Windows Server 2012 R2. Don’t worry, it simply means the path to load Windows cannot be found by the boot loader. And this may be due to the boot loader, or it may be due to the MBR or Boot Sector. Thus, you need to repair the VHDX so it will boot into Windows Server 2012 R2.

First, you need a Windows Server 2012 R2 install ISO image or DVD. Prepare to boot your VM from this media. Using the recovery console to do it.

2. Press a key when you are prompted.

3. Select a language, a time, a currency, a keyboard or an input method, click Next.

7. In the command prompt, you need to type the following command to make the partition on the VHDX active:

8. Then, you need to reboot the VM and boot to the Windows Server 2012 R2 setup ISO again, and run the same progress until you get to the command prompt. In the command prompt, type the following command to set your system straight:

You are now able to boot into Windows. If you still do not boot into Windows, or do not have a boot menu, or something is still wrong, you can reboot the VM and boot to the Windows Server 2012 R2 setup ISO again till you get into the command prompt, type the following command:

After doing those steps, you’ll be asked if you want to add the installation to the boot lost, type “y” and press Enter. Detach the Windows Server 2012 R2 ISO and reboot the system, and you should be greeted by a normal boot screen while Windows adjust to its new virtual hardware.