How to Transfer Games from HDD to SSD Instead of Redownloading?

How to transfer games from HDD to SSD for better performance, read on and you’ll find the top 2 ways to move games between different disks.

How to transfer games from HDD to SSD?

I just got a new Samsung SSD for better performance, and I want it to be my main drive. How do I go about transferring all my games from HDD to the SSD so that I don’t have to redownload them from Steam? Thanks!

Why transfer games from HDD to SSD?

Generally, there are two reasons why people transfer games from HDD to SSD.

1. The better game experience is the most common purpose. An SSD is made up of a solid-state electronic chip and DRAM chip, it delivers information by flash memory, which provides much faster write and read speed than a traditional HDD.

2. People move games from HDD to SSD for free space. Today's games take up large storage space, year after year, people may find the old hard drive running out of space. Thus, users tend to move their games to new SSDs to make room for other important files and applications.

In view of SSD price per GB is more expensive than HDD, and high-performance can give you a great experience. It is maybe wiser to transfer games from a system HDD to an SSD to save some space on your internal drive.

How to transfer games from HDD to SSD in 2 ways?

It’s not an easy job to transfer games between 2 hard disks. You can’t simply just copy the games to another location because in this way, important files like boot files may be missing. So, it’s imperative to find some more secure ways.

Way 1. Transfer installed games between HDD and SSD with an app mover

There're multiple game transfer software utilities on market and this time, I recommend AOMEI Partition Assistant Professional - a powerful and versatile disk management program. It's able to transfer games from one partition to another in only a few clicks and the process doesn't cause any data loss. Video games from mainstream game distribution platforms including Steam, Blizzard, and Origin are all supported by this feature.  Meanwhile, other features including OS to SSD migration and system clone are also available.

How to transfer games from hard drive to SSD? Download the demo of the most powerful app mover to have a try!

Step 1. Install and launch AOMEI Partition Assistant Professional. Select "Tools" from the right of the home interface and then, click on "App Mover"  under "Free up space" tab. 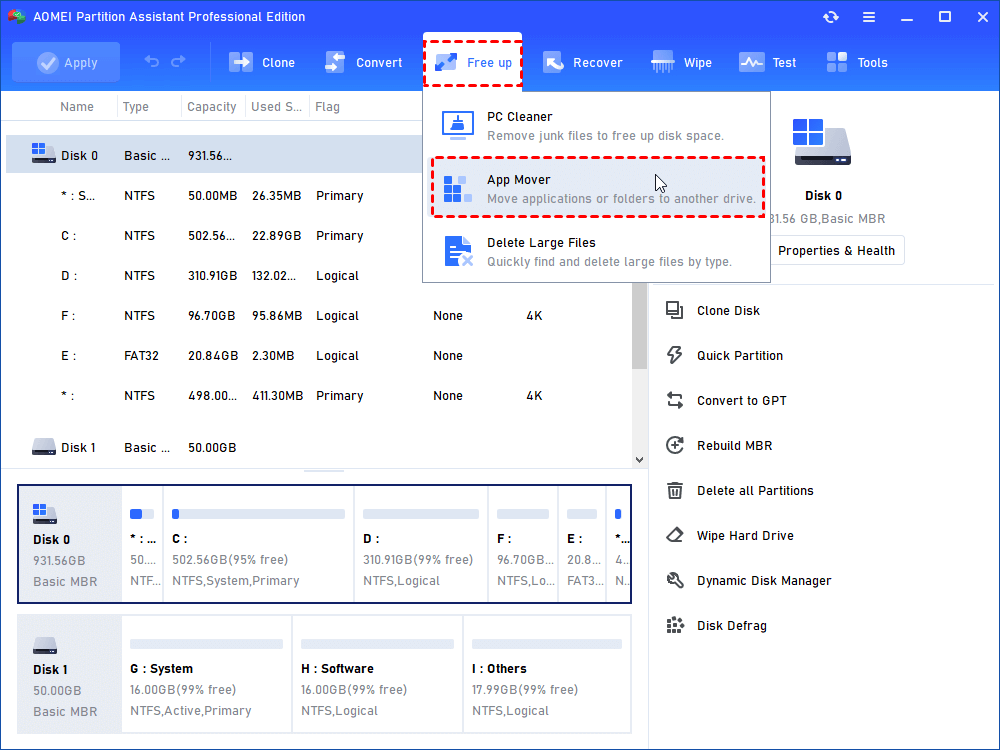 Step 2. Select the partition that contains the games you want to transfer and hit "Next". 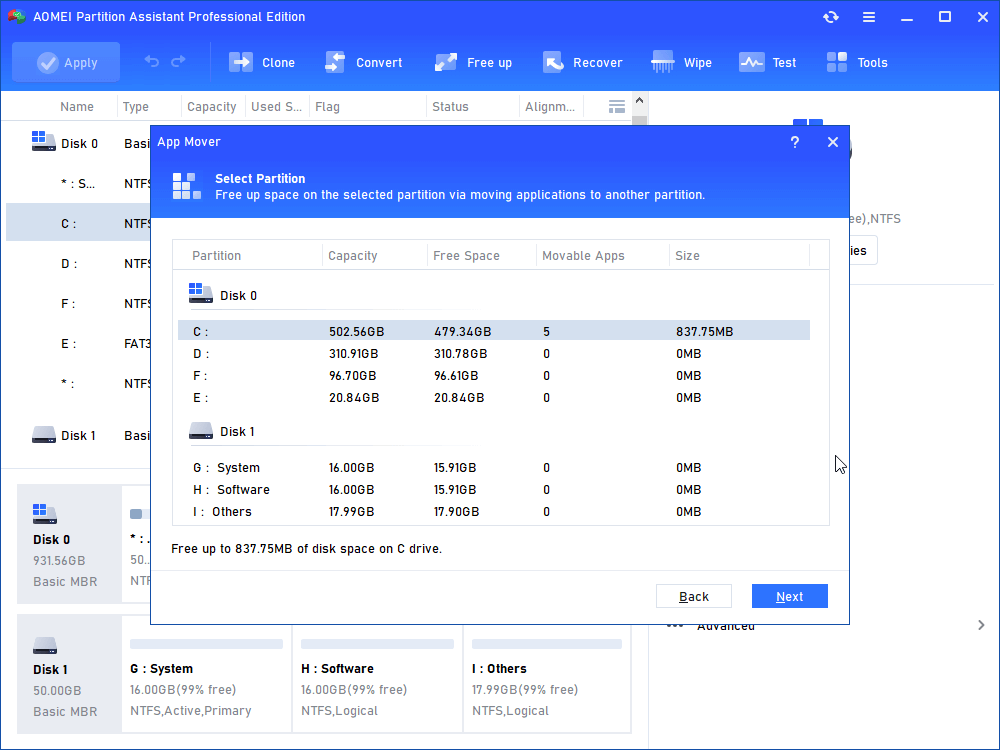 Step 3. Tick the games you want to move and preset a destination. Then, hit the "Move" button. 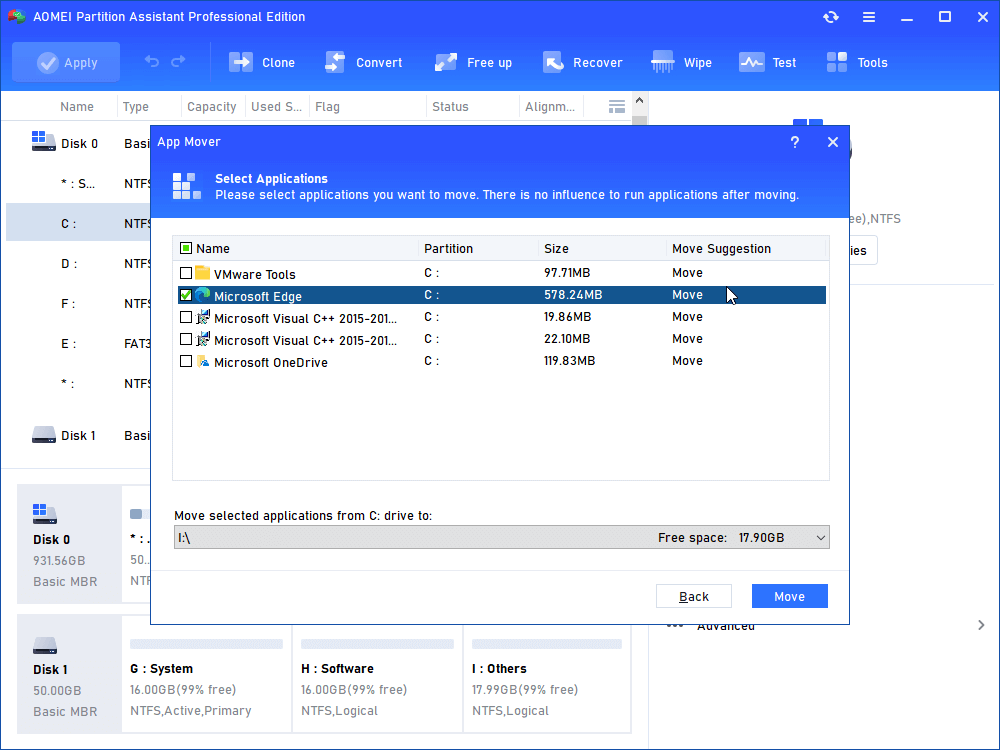 Step 4. Hit "OK" when prompted and the transfer process will start. 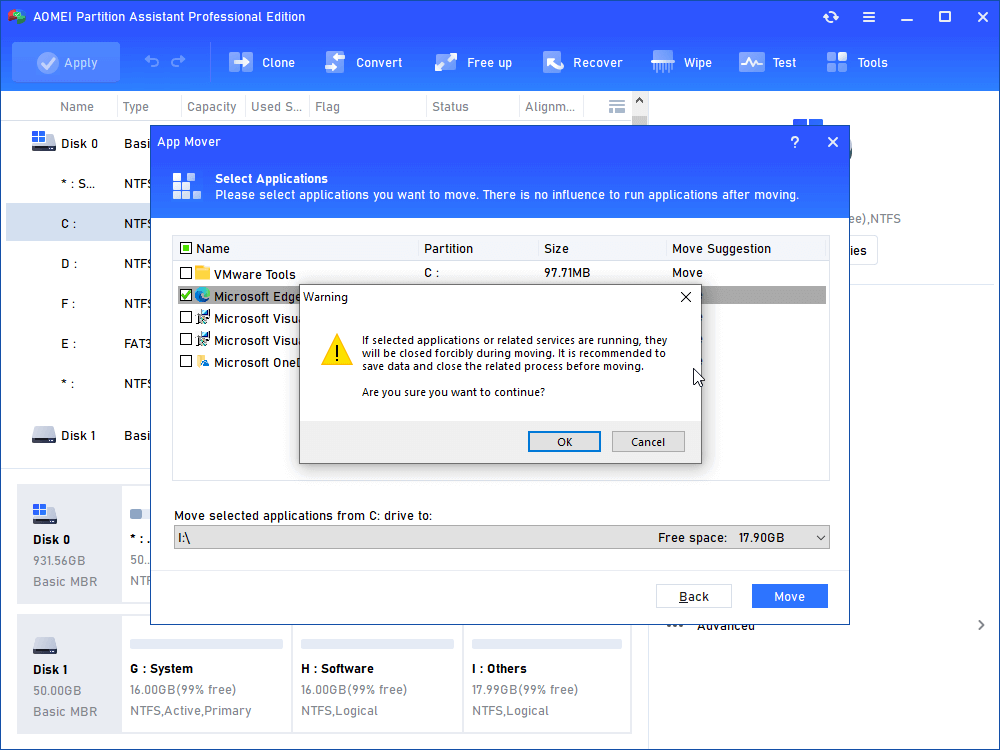 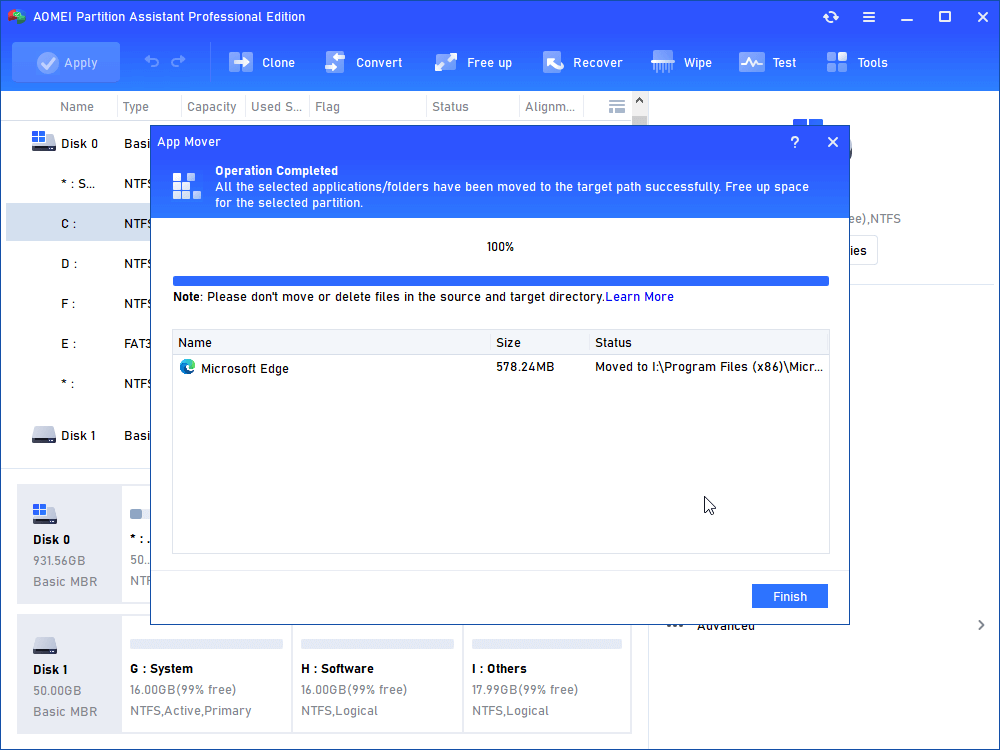 Now, go to the destination and check whether the games can be launched normally, if not, you can restore all the games back to where they previously were. 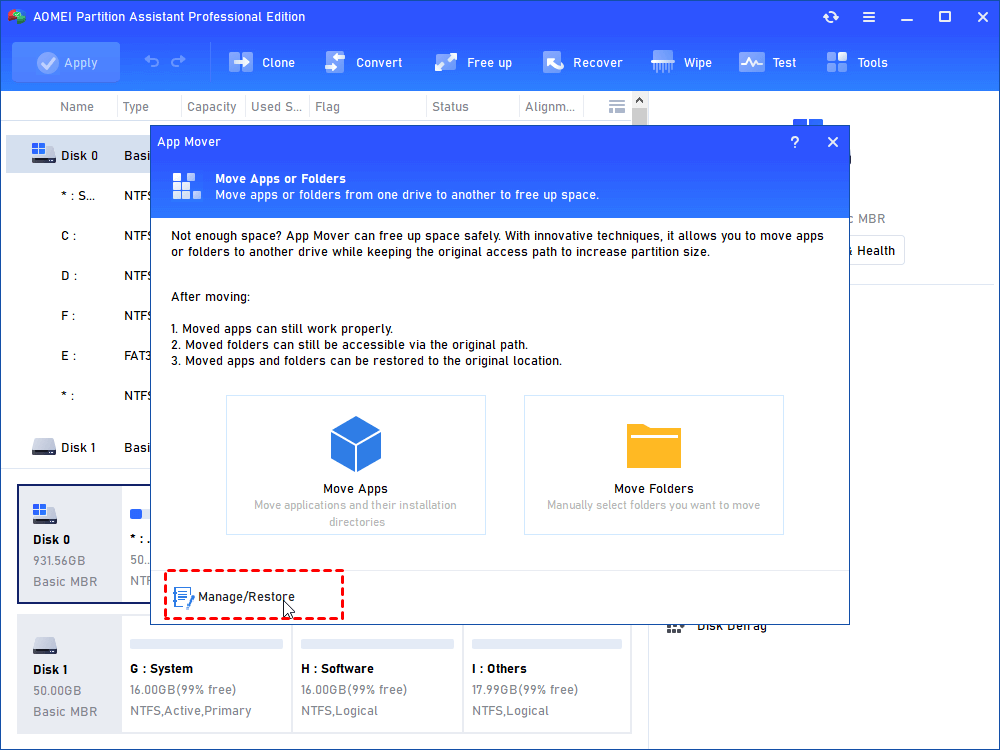 Besides the feature of app mover, with AOMEI Partition Assistant Professional, users can also choose to clone the whole partition where the games are to another partition on the SSD. In this way, all files, no matter whether they're game-related, will be transferred to the new location. Compared with the app mover, partition clone is equally secure but it could take more time.

1. Launch AOMEI Partition Assistant Professional. Select the partition that contains the games and right-click on it and select "Clone Partiton". 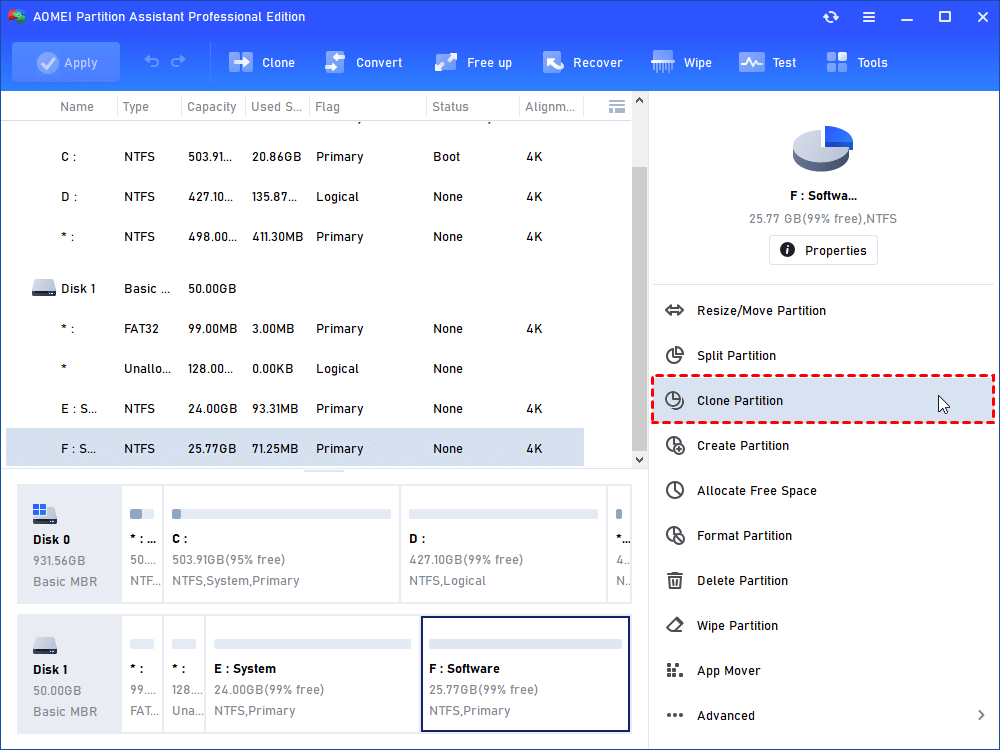 2. There're 2 clone methods "Clone Partition Quickly" and "Sector-by-sector" Clone. Here, I recommend the first one for it's faster.

Sector-by-sector clone: Clone all sectors of the selected partition, whether used or not. 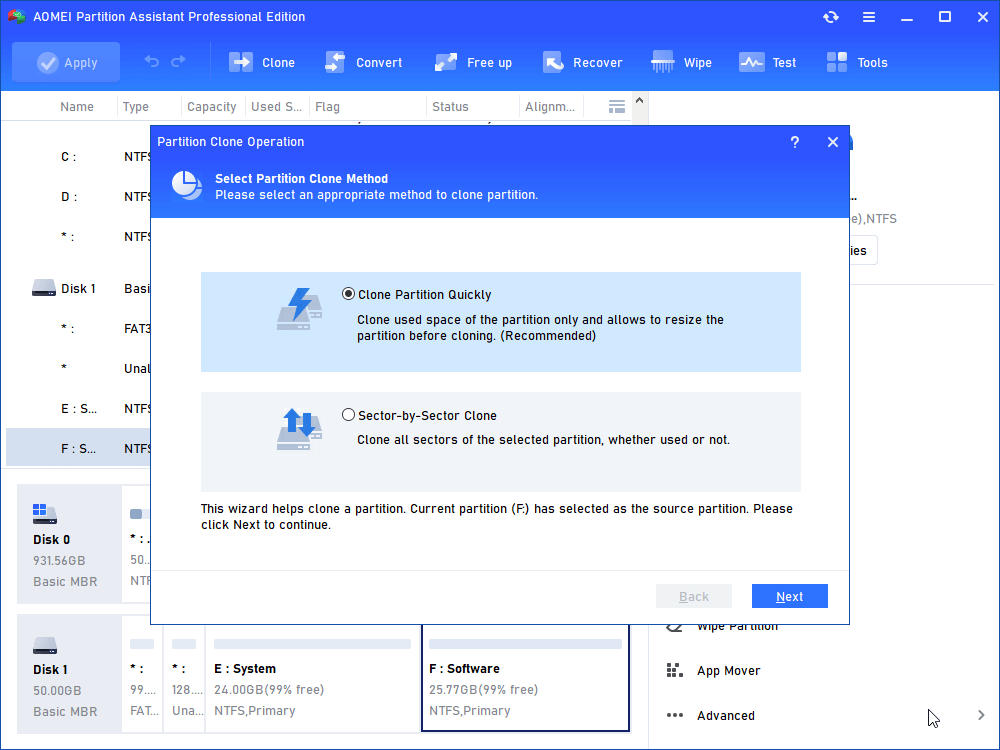 3. Select a piece of unallocated space as a destination to store the source partition. If the destination disk is an SSD, tick off the option "Optimize the performance of SSD" and click on "Next". 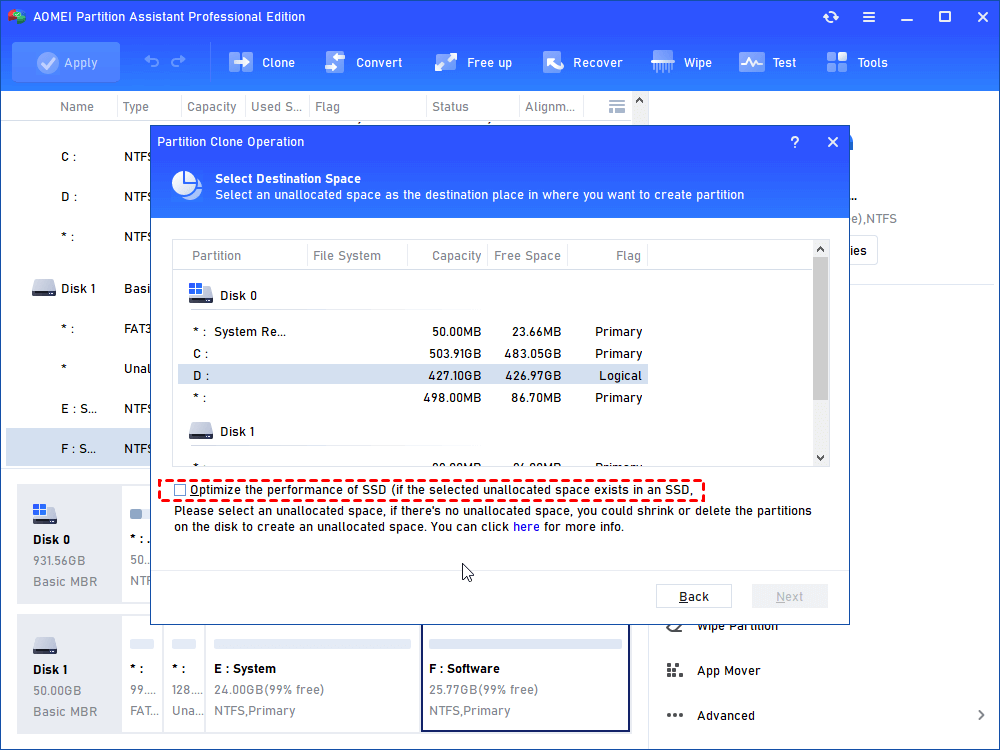 4. Adjust the partition size. When it's done, click on "OK". 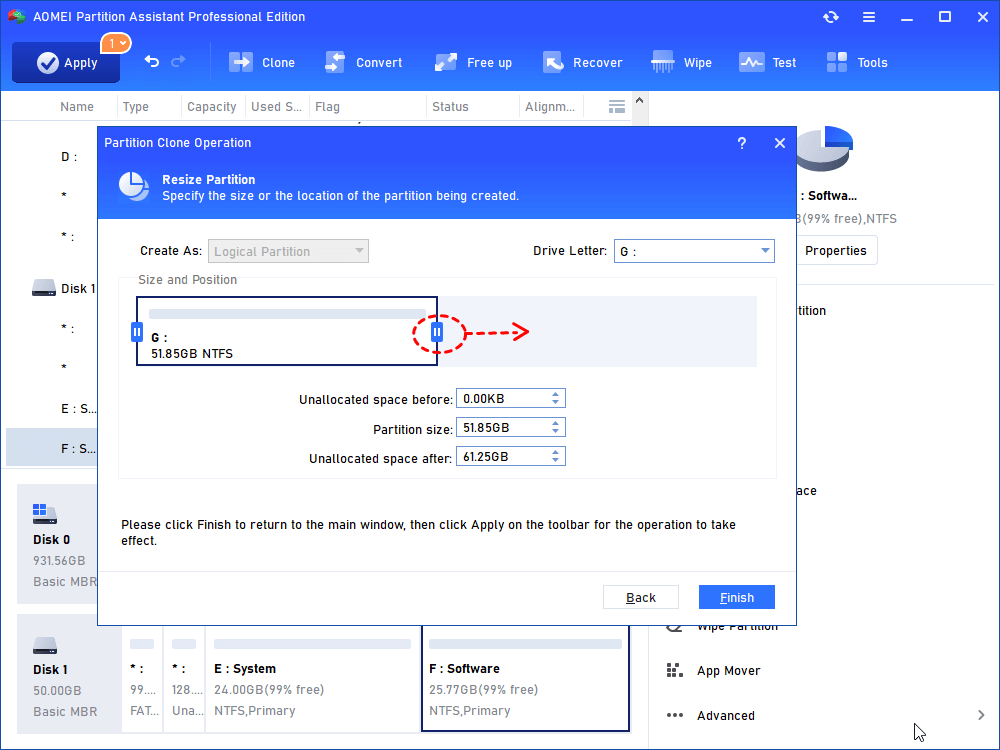 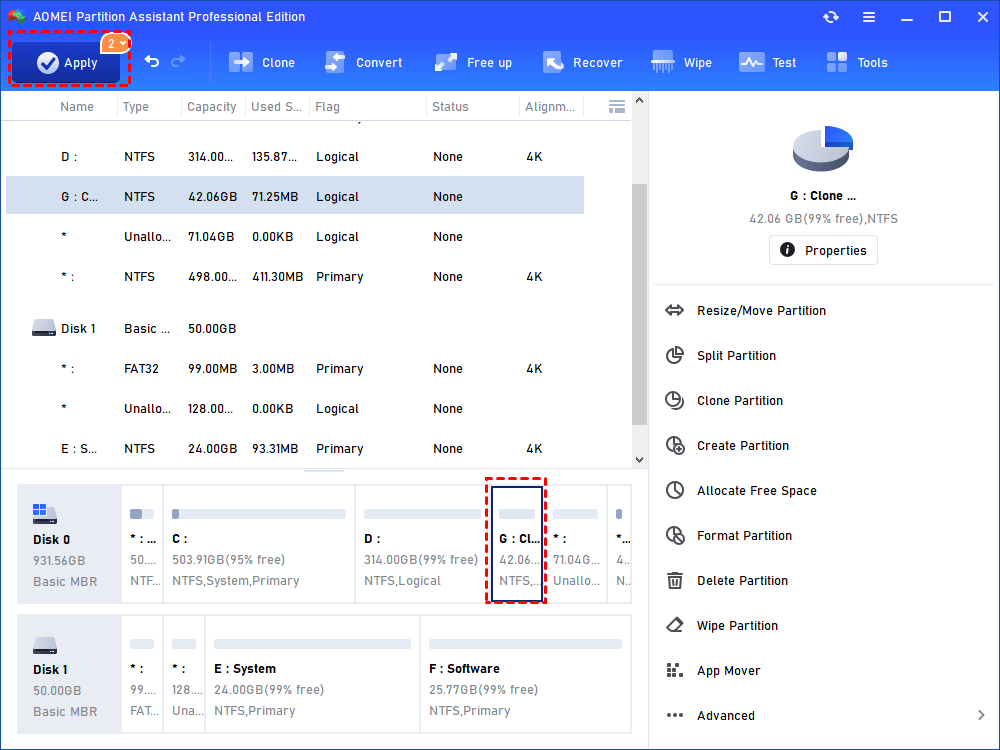 Note: Besides partition clone, if you want to clone the all the files on a hard disk to another SSD/HDD, you can try the disk clone feature.

Extended reading: How to transfer games from HDD to SSD in Steam

Steam is the world's biggest game distribution platform with millions of users. Most Steam players have more than 1 game on their PC and over time, the storage space may run out; or sometimes, players tend to put their games on SSD to enjoy better performance and shorter load time. Thus, it's reasonable to transfer Steam games from one hard drive to another. Here, we'll discuss how to transfer games from HDD to SSD with Steam's own settings.

2. Hit "ADD LIBRARY FOLDER",  select a partition of the SSD, hit "NEW FOLDER" and then, write a directory name. 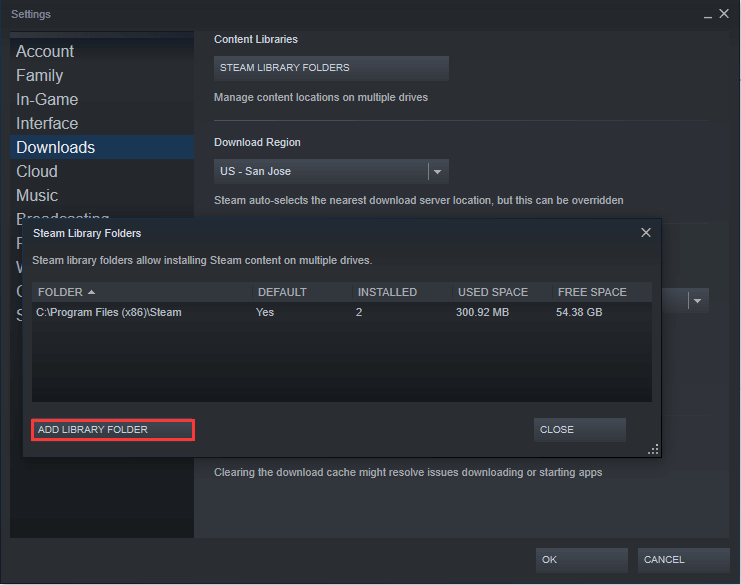 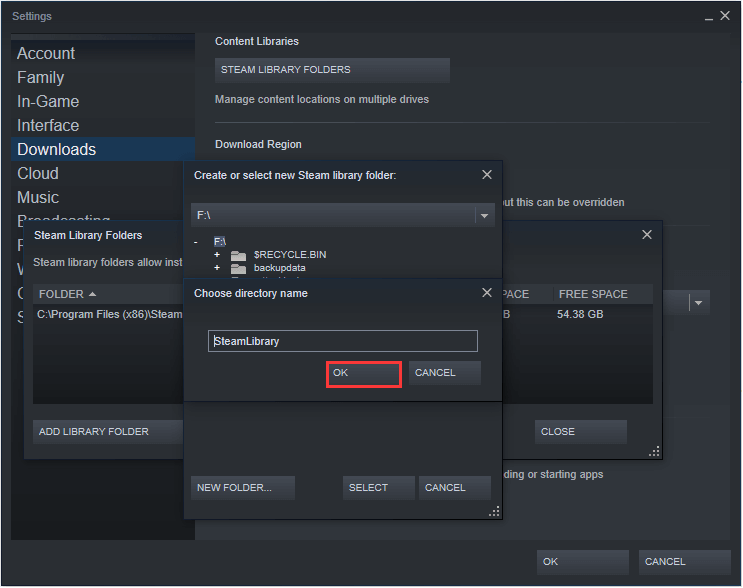 3. Return to the home interface, right-click on the game you want to move, and click on "Properties". 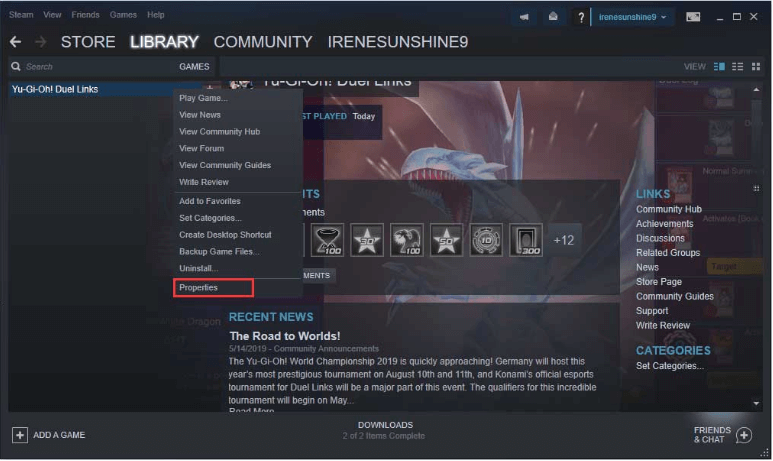 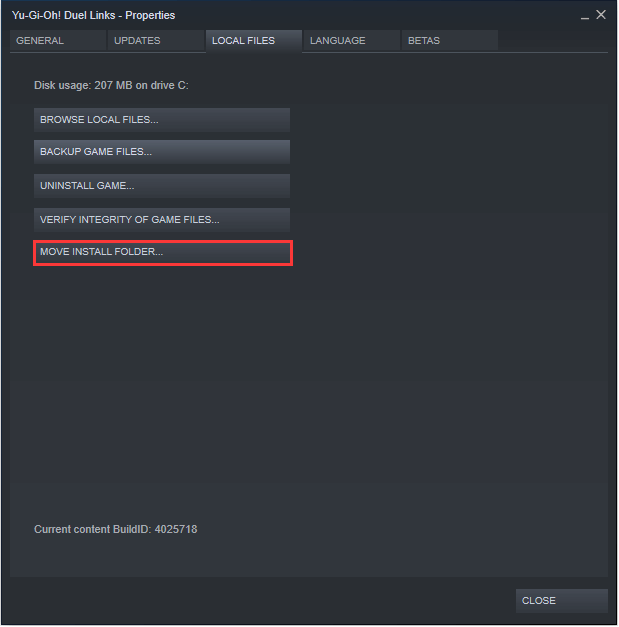 5. Click on "MOVE FOLDER" to start the file transfer. 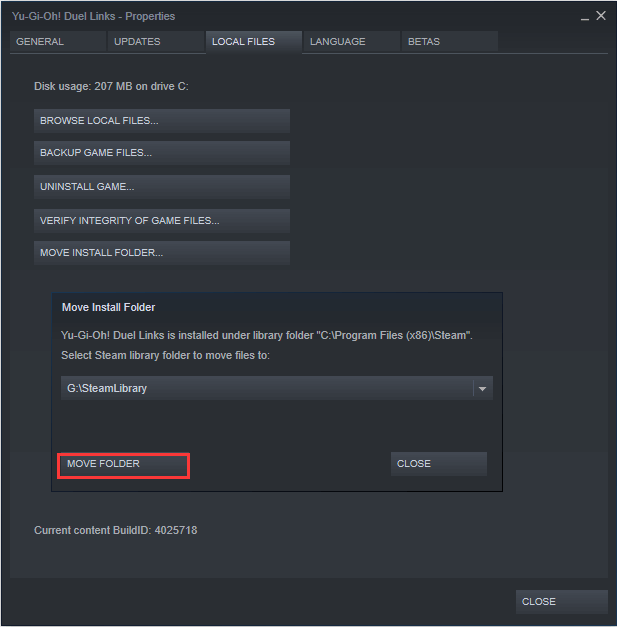 Wait a few seconds before the process gets completed. Then, hit "CLOSE" to quit.

How to transfer games from HDD to SSD in Windows 11, 10, 8, 7. In this post, you learned 2 practical tools – AOMEI app mover and hard disk cloner. Either of them has its own distinctions. The disk cloner allows you to clone the entire partition where the games are from HDD to SSD in only a few clicks while the app mover clone specific video games to another drive without any data loss. If you’re a Windows Server user, you might as well try the Server edition of the AOMEI product.