About RAM on Android Device

Nevertheless, the Android device that produced at an early time is built with small RAM. For example, HTC Explorer that released in 2011 has only 512MB RAM; HTC HD2 has 576MB RAM; Samsung Galaxy Y series even has 290MB RAM; and Galaxy Ace has 384MB (accessible 278MB) and Galaxy Mini series also has less than 1GB RAM. Other than these mentioned Android phones, the device with 1GB or 2GB RAM may no longer meet our daily requirement.

Why Increase Internal Memory in Android?

As we know, internal memory of Android device, to a large extent, affects the number of running programs on your phone or tablet. Therefore, when you start many programs in a small internal memory device, you are likely to get the “low space in internal memory” warning. Meanwhile, to run heavy software like games, it may stop or exit the program now and then. Some system programs may not function normal as well, which will dramatically affect the user experience.

How to Increase Internal Memory for Android Mobile and Tablet?

Clear internal memory through closing all running software will not solve the low space in RAM thoroughly. Also, you can prevent some software or programs from running at backstage. However, chances are that you’ll encounter the same issue in the near future.

In a nutshell, you can increase internal memory using SD card for your Android phone. The theory is, create two partitions with different file systems on the SD card. One is FAT32 which is used as storage (ROM), and the other is EXT2, EXT3 or EXT4 that is used to increase internal memory (RAM). This is simple yet you have to meet several conditions and prepare some tools at the same time.

Note: It is advised to back up all data on the SD card using easy-to-use free AOMEI Backupper before you start because the below steps may format it and cause data loss.

Step 1.  Insert the SD card to the card reader and plug into the computer.  Install and run AOMEI Partition Assistant Professional. For a free trial, you can download its Demo version and preview the process.

Step 2: at the main interface of this partition tool, you’ll find your SD card marked as removable disk. If it is a new SD card, it will show up as unallocated space. You can right-click the space and select “Create Partition”. 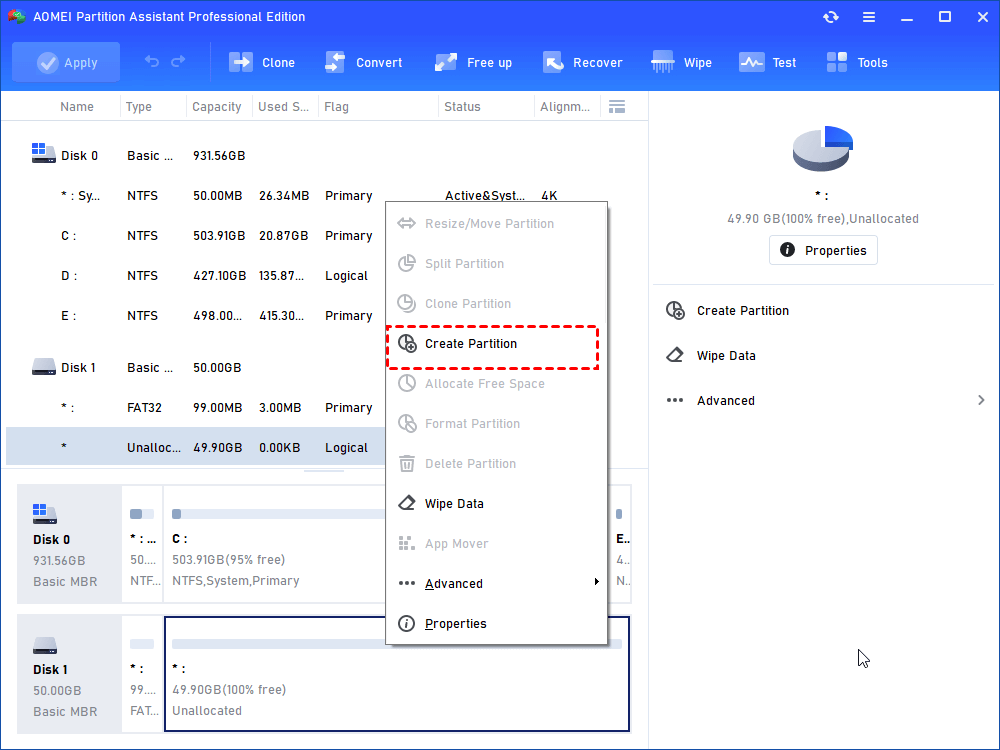 Tips: If this is your old SD card and it has a lot of free space, you can resize the SD card first and then create a new partition with EXT2/3 file system using the generated space. This will not cause data loss. For more information, please see partition SD card.

Step 3: in the pop-up window, adjust the partition size, assign drive letter, and select FAT32 as the file system. 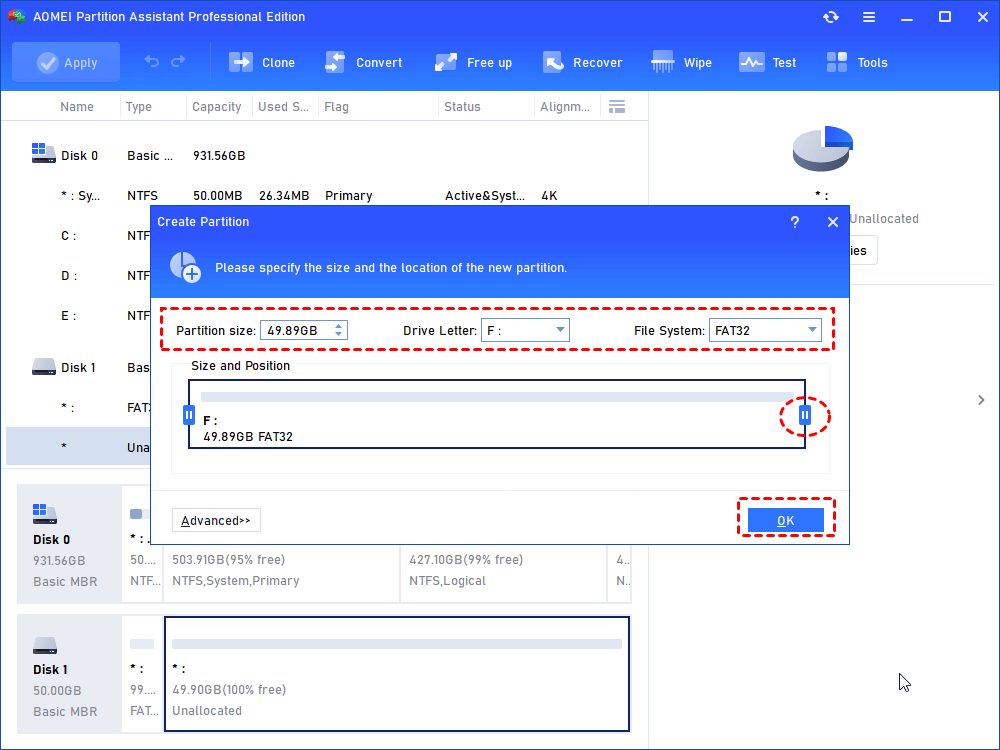 Step 4: click “Apply” and later “Proceed” to execute this operation first. Otherwise, you cannot move to next step.

Step 5: right-click the left space and select “Create Partition” again. It will prompt you that the second partition on a removable device cannot be assigned with a drive letter since Windows will not recognize it. Click “Yes” to continue. 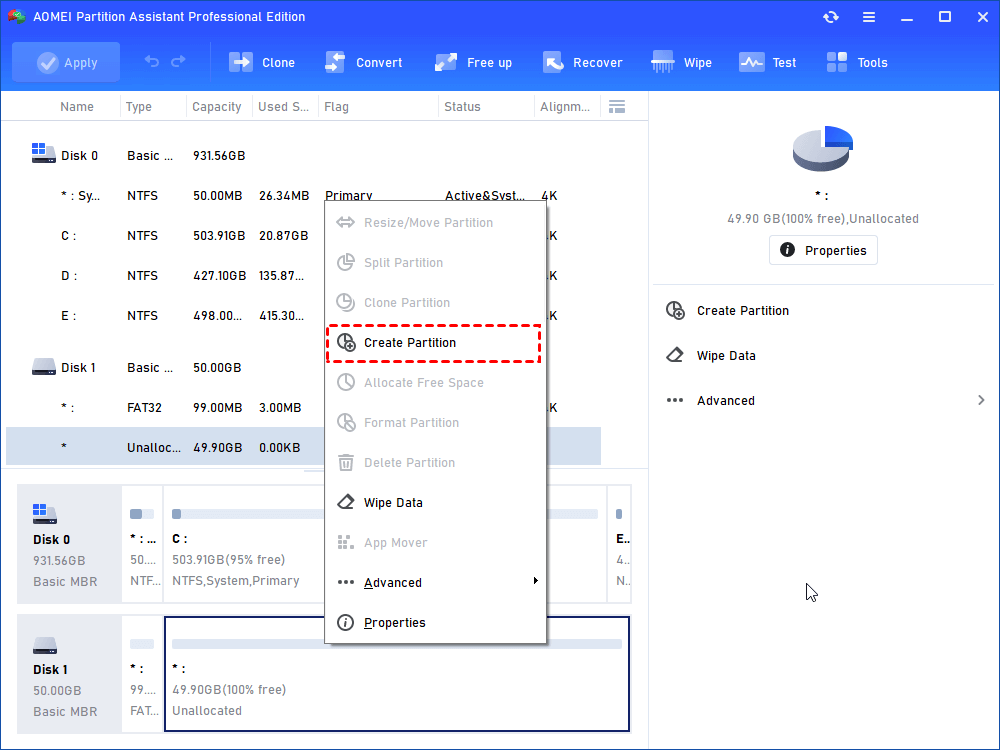 Step 6: you have to only select the EXT3 as the file system at this time. 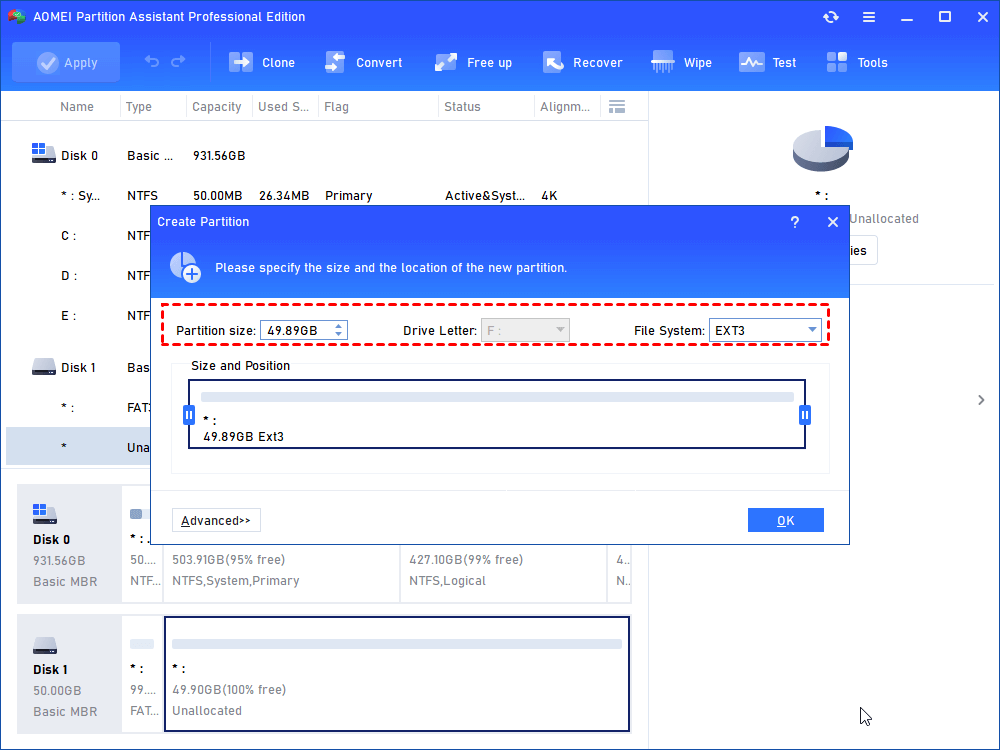 Step 7: remember to click “Apply” to comply the operation. 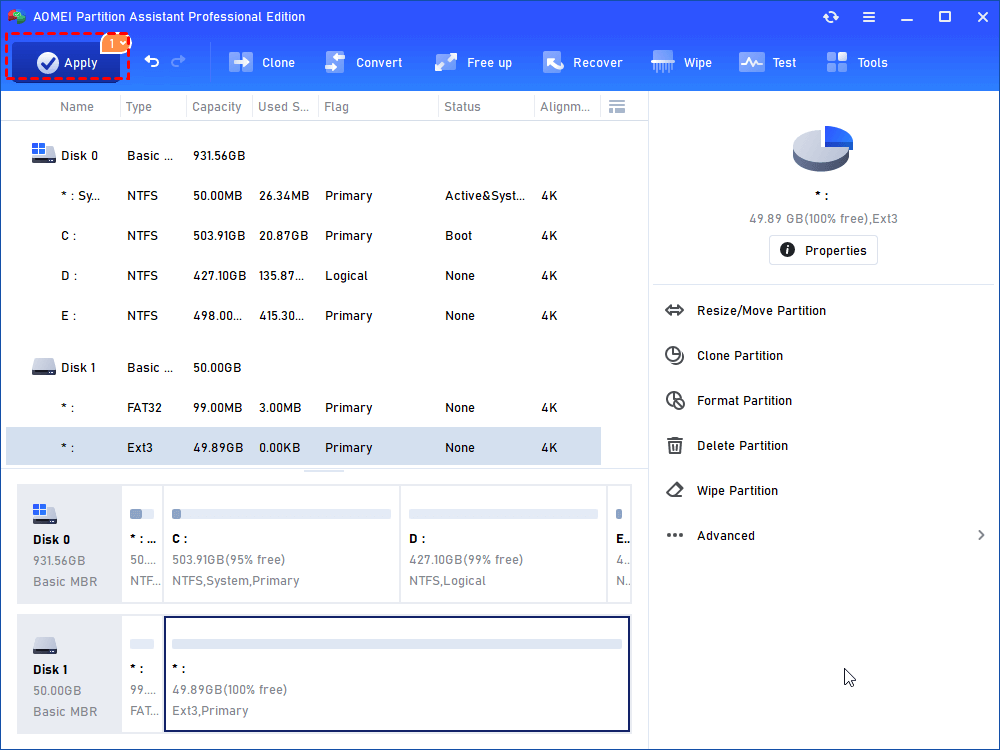 Step 8: unplug the SD card and insert it back to your Android phone or tablet. Check out and you’ll find the internal memory is expanded. You may need to restore the backup image if you backed up before. Install the Link2SD to move applications to SD card if the need ever arises.

Warning: this method consumes the SD card lifespan greater than using it as storage only. Therefore, try this method with caution and back up important data at any time just in case.

The question, how to increase internal memory of your Android device, is perfectly solved by now. Increasing the RAM of Android mobile by partitioning SD card could be the most suitable one for normal user. As a matter of fact, AOMEI Partition Assistant can help you format SD card for 3DS as well. Besides, for large capacity SD card that cannot be formatted to FAT32 in Windows, you can still turn to this tool. For more information with screenshots, please see software to format 64GB SD card to FAT32 and format 128GB SD card to FAT32.

You May Also Like
How Can I Expand My Phone Storage?
How to Free up Space on Android without Deleting Apps?
How to Clone Android SD Card to A Larger One?