How to Perform SSD to SSD Migration in Windows 7/8/10?

If you want to migrate data from old SSD to new SSD, or from smaller SSD to larger SSD drive, you can use the AOMEI Partition Assistant Standard, which can help finish SSD to SSD migration task via the “Disk Clone Wizard”.

Why perform SSD to SSD migration?

More and more users change their primary hard drive from HDD to SSD SSDs like Samsung SSDs, Intel SSDs etc replace traditional HDDs At an earlier time, the prices of SSDs are generally more expensive with small capacity. A part of computer users have bought that kinds of SSD and replaced HDD with SSD in desktops or laptops then. They enjoyed the convenience of the new technique yet soon they encounter some issues. The most serious problem should be the limited disk space. As time goes by, a large quantity of data created by system as well as PC users have been stored on the small SSD. So, it is time to migrate smaller SSD to larger SSD.

Of course, not every user purchased the small capacity SSD at that time. People who have bought large-sized SSD may also need to migrate old SSD to new SSD if their SSDs are about to die after years of usage. Although SSD has higher quivery resistance capability as the storage device, it is also likely to be attacked by hacker, virus etc. Therefore, to do data migration from SSD to SSD is a good solution to saving your system.

Other intentions of performing SSD to SSD data migration might be for the same layout of the current SSD and the security of some confidential data. However, whichever reason leads to your decision, you need to figure out how to migrate SSD to SSD.

If one of your SSD comes from Samsung SSD, you may turn to its own Samsung Data Migration (SDM) to move SSD to SSD. For detailed steps of using SDM, please refer to clone HDD to Samsung SSD. In Windows operating system, it is hard to ask internal tools for help. But you can complete migration with a roundabout way if you’re a big Windows fan. Simply put, you can back up your current SSD and then restore everything to the target SSD with Backup and Restore utility in Windows 7/8/10.

Alternatively, AOMEI Partition Assistant Professional can assist you do data migration between SSDs more directly and easily. It comes with a feature named “Disk Clone Wizard”. This feature ensures the secure boot from target disk after copying. If the destination SSD is larger than the source, you can resize or enlarge each partition during the migration. Without further ado, let’s move to next part to learn specific steps of SSD to SSD data migration. (PS.: this software provides the demo version for simulating the operation.)

Tutorial: migrate SSD to SSD by cloning the disk

Step 1. Install the newer or larger target SSD to your PC with SATA cable or USB adapter. Make sure your Windows recognizes it. The target SSD will be overwritten after migration. So if any important file exists, back them up first. 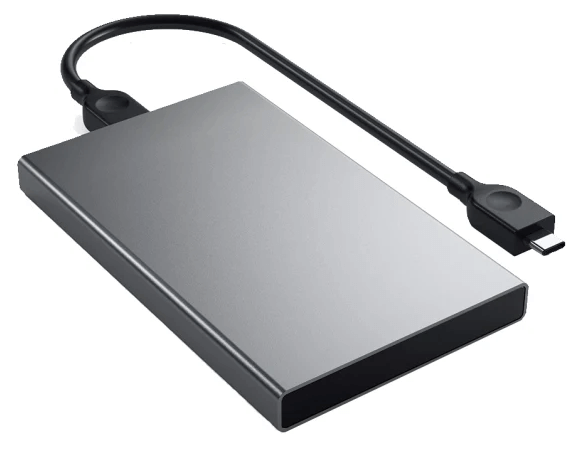 Step 2. Install and launch AOMEI Partition Assistant. Enter the main interface and click Disk Clone Wizard in the Wizard pane. Then choose the clone method you wish to use in the next window. 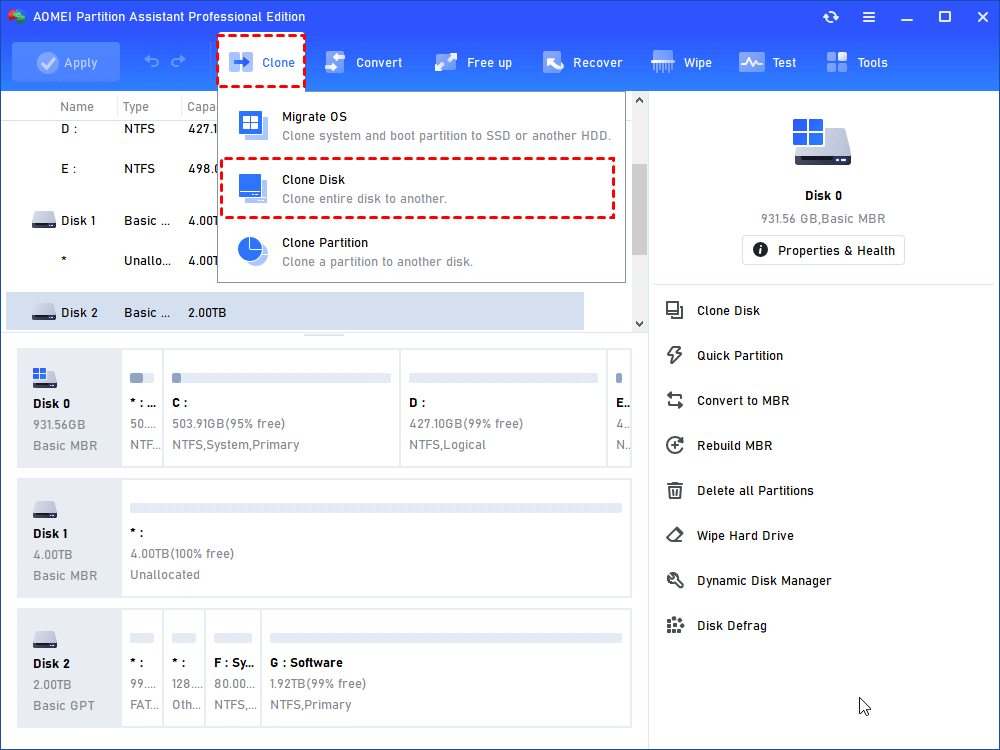 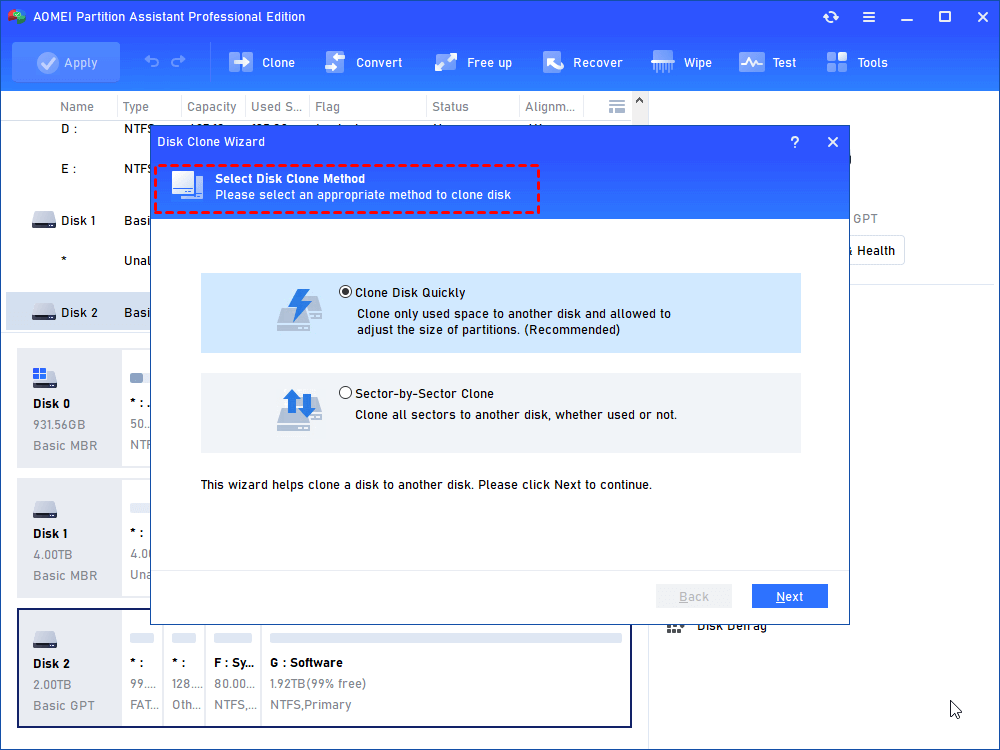 Step 3. Select the source SSD and the destination SSD in the subsequent window. 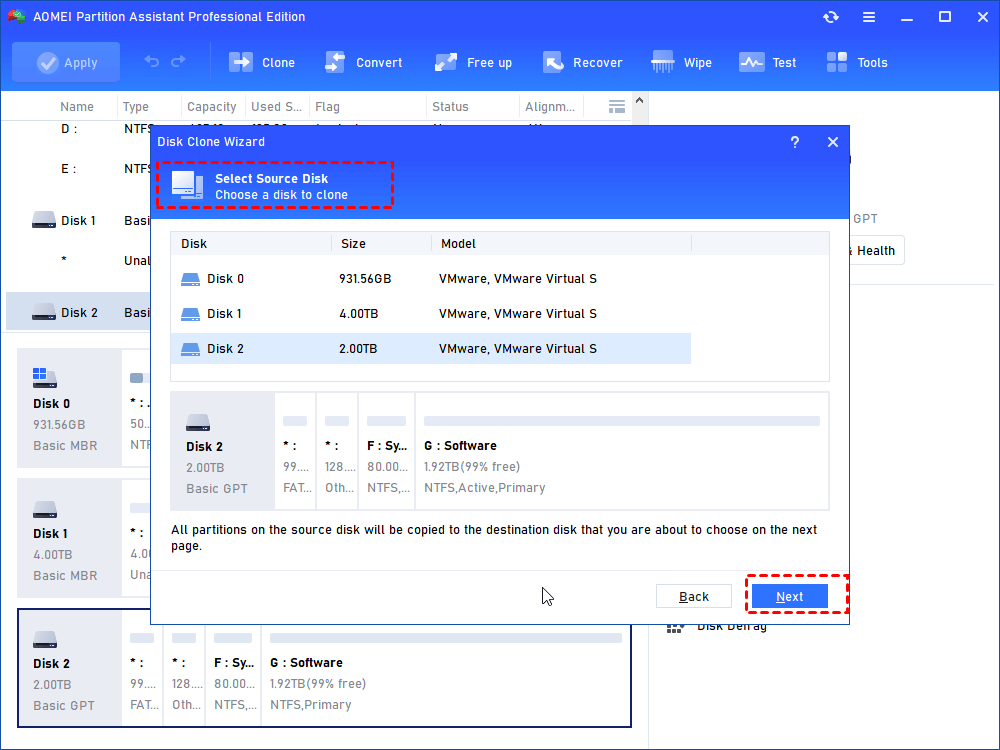 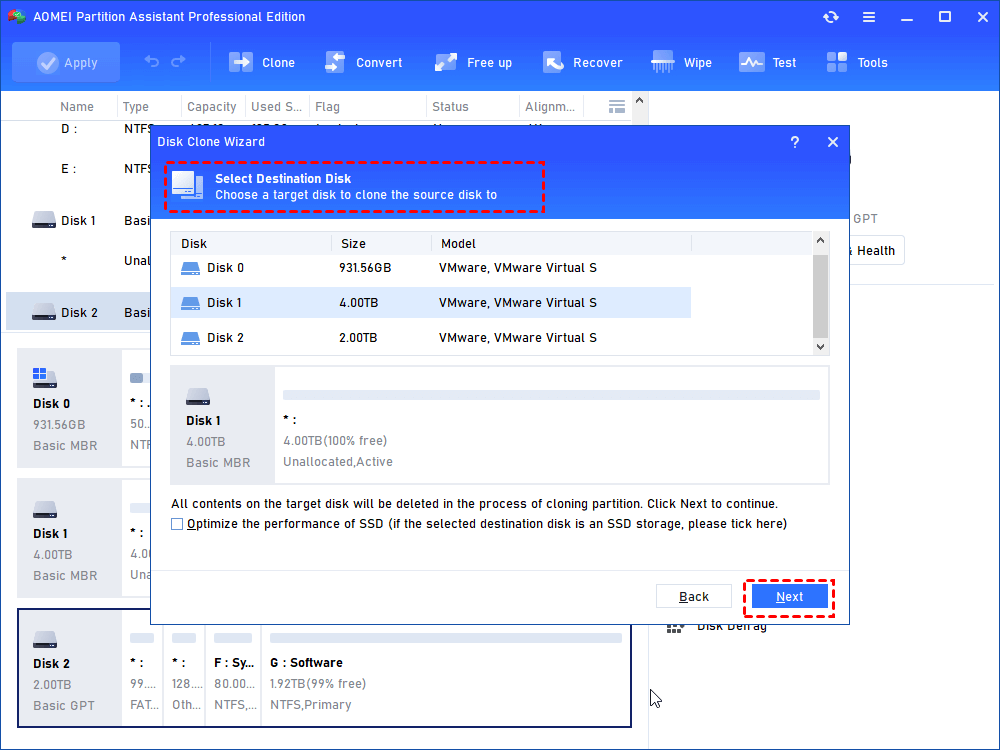 Step 4. You have three options to edit partitions on the target SSD here. If you don’t satisfy with the partition layout later, you can resize partition using this same software as well. After the configuration, you will read a boot Note that might be useful later. 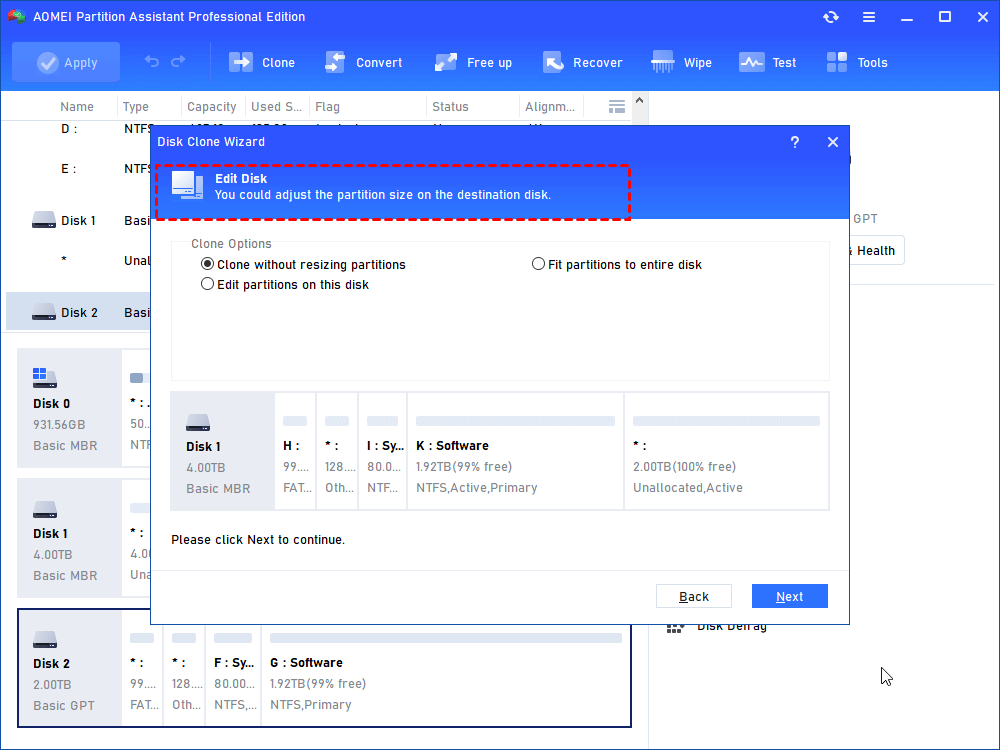 Step 5. Then you can see the virtual result of all operations, click Apply now. In the pop-up window, there is a final confirmation for you. If nothing goes wrong, click Proceed to start cloning. 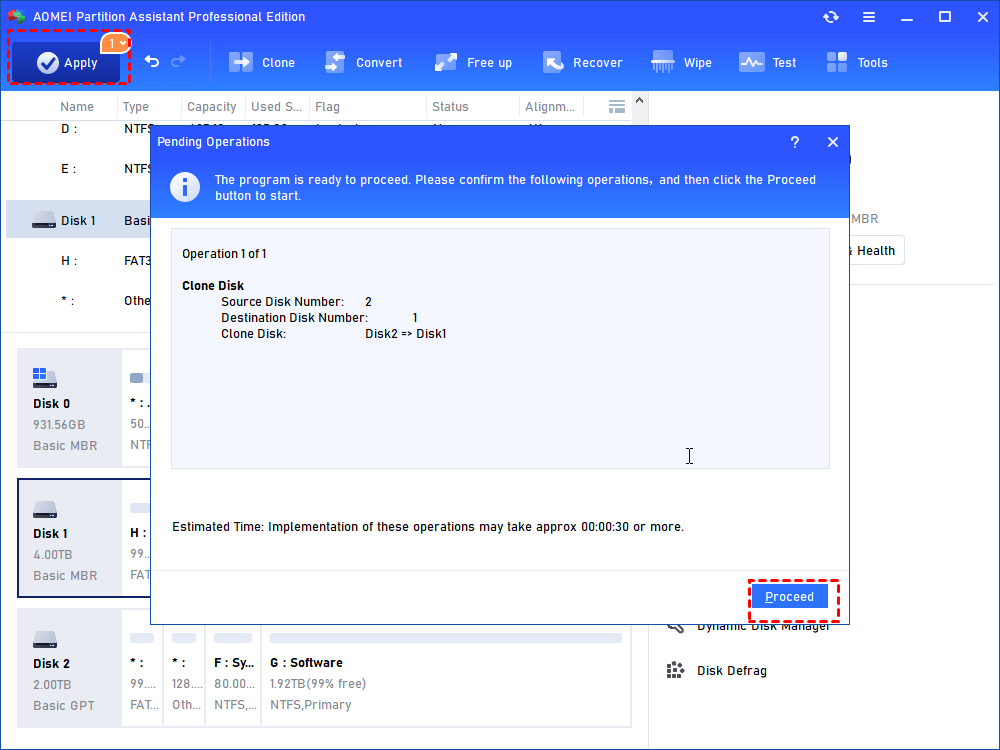 If the SSD is the boot drive, and you have cloned it to another SSD. To boot computer from the new SSD drive, you have to enter BIOS settings and change boot order to make the cloned SSD as the first boot device.