You may need to find the best alternative to MBR2GPT disk conversion tool to avoid the MBR2GPT error like MBR2GPT missing in Windows 10 v1703 and later versions.

MBR2GPT is a disk conversion tool built-in Windows 10 v1703 and later versions. It supports Windows 10 users to convert an MBR disk to a GPT disk without modifying or deleting data on the disk. MBR2GPT.EXE is located in the Windows\System32 directory on a computer running Windows 10 version 1703 or later. It is designed to be run from a Windows Preinstallation Environment (Windows PE) command prompt, but can also be run from Windows 10 operation system by using the /allowFullOS option.

With the MBR2GPT tool, you can convert any attached MBR-formatted system disk to the GPT partition format. You can also convert operating system disks that have earlier versions of Windows 10 installed, such as 1507, 1511 and 1607 by running MBR2GPT while booted into Windows 10 version 1703 or later, and perform an offline conversion.

How to use MBR2GPT conversion tool?

Compared with MBR disk, GPT disk has many advantages:

And because of the advantages of GPT disk, users would like to convert the MBR disk to GPT disk for a better use. Before converting, you need to know:

mbr2gpt /convert /disk:n (n refers the disk number you want to convert to GPT disk. This command is suitable if you are working under Windows PE).

mbr2gpt /convert /disk:n /allowfullOS (n refers the disk number you want to convert to GPT disk. This command is suitable if you are working in the full OS environment ).

Then, you can use the MBR2GPT disk conversion tool to convert MBR disk to GPT disk with the commands we mentioned above. For example: 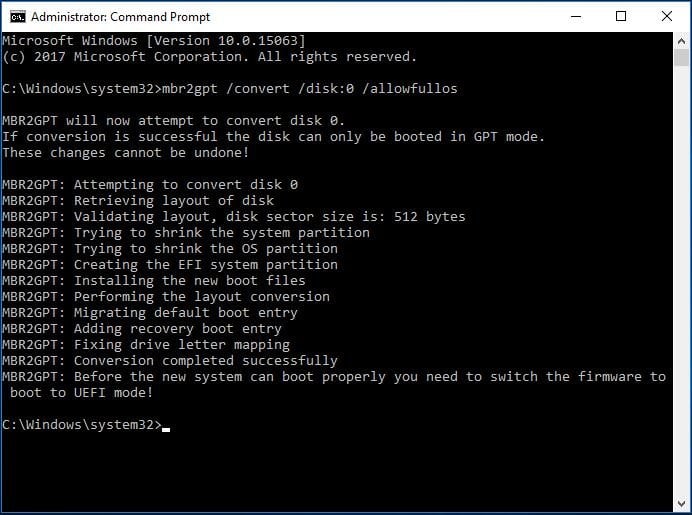 AOMEI Partition Assistant Standard should be the best free alternative to MBR2GPT disk conversion tool. It allows you to convert disk between MBR to GPT, and you won’t lose any data during the operation. That means you can use it to safely convert MBR to GPT, or convert GPT to MBR. If you need to convert system disk between MBR and GPT without reinstalling OS, you can upgrade to AOMEI Partition Assistant Professional to unlock this feature and more advanced features.

Install it to your Windows PC and start to convert system disk from MBR to GPT with the function Convert to GPT Disk.