What is the MBR2GPT Tool in Windows 10 and How to Use?

In this article, I will show you how to use the MBR2GPT tool in Windows 10, and I will also introduce a simpler alternative tool.

MBR2GPT is a Windows 10 v1703 and later versions built-in tool, which converts an MBR disk to a GPT disk without modifying or deleting data on the disk. MBR2GPT.EXE is located in the Windows\System32 directory on a computer running Windows 10 version 1703 or later. It is designed to be run from a Windows Preinstallation Environment (Windows PE) command prompt, but can also be run from Windows 10 operating system by using the /allowFullOS option.

With the MBR2GPT tool, you can convert any attached MBR-formatted system disk to the GPT partition format. You can also convert operating system disks that have earlier versions of Windows 10 installed, such as 1507, 1511, and 1607 by running MBR2GPT while booted into Windows 10 version 1703 or later, and perform an offline conversion.

Why use MBR2GPT to convert MBR to GPT?

MBR and GPT are two different disk partition styles. The disk can only be used to store data after the partition style is selected during initialization, including storage of the operating system. The initialized disk is called MBR/GPT disk.

MBR is an older partition style, which has limitations on hard disk capacity and the number of primary partitions. It can only support hard drives up to 2 TB and supports up to 4 primary partitions. GPT does not have these restrictions, so the use of GPT disks is becoming more and more common. If you want to upgrade to Windows 11, you should convert the MBR system disk to GPT, so many users want to use MBR2GPT for Windows 11.

Tip: You may meet some problems like cannot fully use a 3TB hard drive which may be because the MBR disk supports up to 2 TB capacity. If you plan to make full use of the 3 TB or larger hard drive, you need to convert the MBR disk to GPT.

How to use MBR2GPT disk conversion tool to convert MBR to GPT?

To convert MBR system disk to GPT disk with MBR2GPT tool Windows 11, here you can follow the command lines in different situations.

If you are working under Windows PE, type: mbr2gpt /convert /disk:n 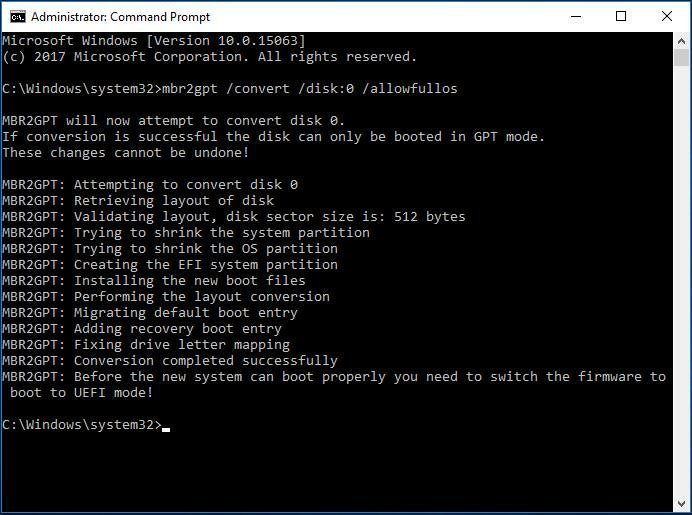 Notes:
▪ You need to ensure that your computer supports UEFI before converting the OS disk to GPT;
▪ After the MBR OS disk has been converted to GPT partition style, you need to reconfigure the firmware to boot in UEFI mode.

With the MBR2GPT tool Windows 10, you can safely and non-destructively convert a Windows 10 computer from legacy BIOS to UEFI disk partitioning (you cannot use the MBR2GPT tool in Windows 10 to convert non-system disks from MBR to GPT). You can also convert OS disks that have earlier versions of Windows 10 installed, but you must run the tool while booted into Windows 10 version 1703 or later, and perform an offline conversion.

However, offline conversion of system disks with earlier versions of Windows installed like Windows 7 or Windows 8/8.1 are not officially supported. Thus, you must upgrade the operating system to Windows 10 first so that you can perform the MBR to GPT conversion with MBR2GPT tool. Besides, you may meet the problem "disk layout validation failed for disk 0": 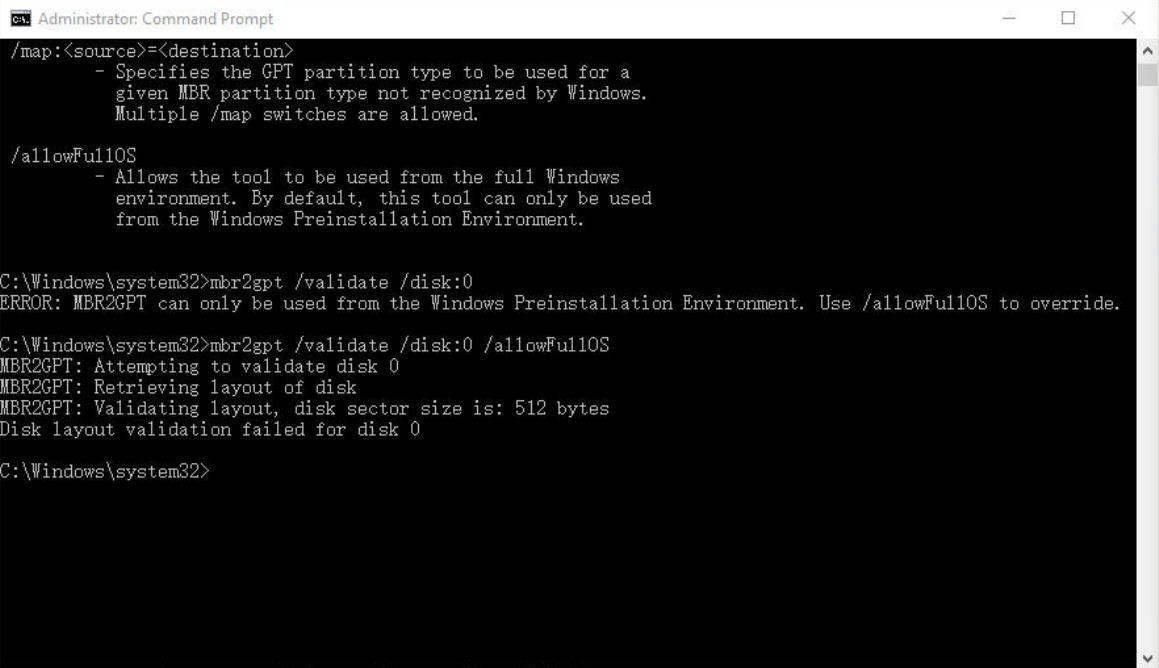 Or the problem that "MBR2GPT.EXE has stopped working": 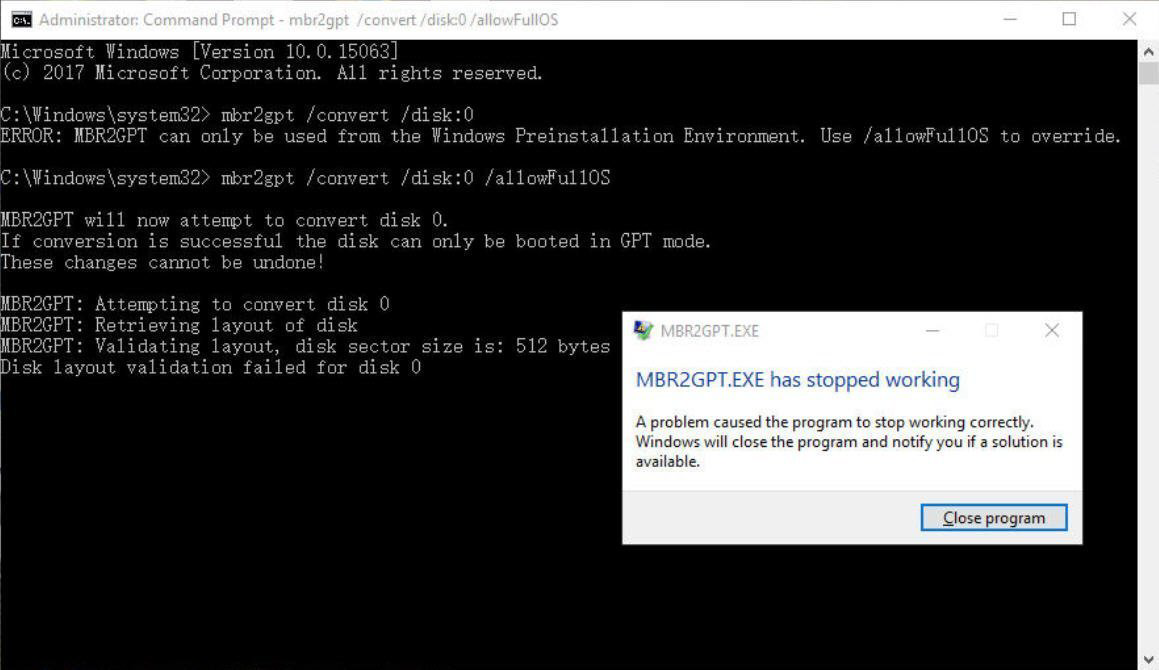 When you meet those MBR2GPT errors and do not know how to do it, you can change to another third-party software to convert MBR disk to GPT.

A simple alternative to the MBR2GPT tool Windows 10

Although MBR2GPT is very popular, are these steps too complicated for ordinary users? It is not easy for a user with no computer background to input the command line. To avoid this situation, I recommend you to use AOMEI Partition Assistant Professional.

It was designed for Windows users and is a good alternative to the MBR2GPT tool for Windows 10. It can help you convert the system/data disk from MBR to GPT without losing data. If you want to convert MBR to GPT for Windows 11, then you should not miss it.

Before using AOMEI Partition Assistant to convert the MBR system disk to GPT, you need to make sure that your computer’s motherboard supports UEFI mode. Then, you can start to do it as the following guide.

Step3. Then, you will be back to the main interface, click Apply to submit.

Wait till the progress is finished. And you have already converted the MBR OS disk to a GPT disk without losing data. Finally, you need to change BIOS to UEFI, because the GPT system disk needs booted by UEFI boot mode.

You May Also Like
Find The Best Alternative to MBR2GPT Disk Conversion Tool
How to Fix Convert to MBR Disk Not Available Issue Effectively?
Best Free MBR to GPT Converter for Windows 11/10/8/7 (No Data Loss)