GDisk: Convert MBR to GPT without data loss in Windows

This article displays how to convert MBR to GPT without data loss using GDisk as well as better replacement of GDisk in Windows 10/8/7.

About GDisk in Windows

What is GDisk? GDisk is an interactive text-mode program similar to FDisk. However, GDisk includes all features of FDisk as well as its additional features. It is a command-line utility that runs only in DOS, so you cannot access it under Windows environment. Then, a bootable USB drive or Windows installation disc is necessary. It can be downloaded and extracted to Notepad.

GDisk Command can be used to do many disk operations, basic and advanced, such as change a partition’s name, delete a partition, create a new empty GUID partition table, and so on. Converting MBR to GPT and convert GPT to MBR features are two of them. You can run these features by the different codes.

The reasons for converting MBR to GPT are similar actually. In general, a user wants to convert partition style from MBR to GPT when he owns spacious drive that build with more than 2TB capacity, or wants to create more than 4 primary partitions on his drive, or installs advanced system like Windows 10 that requires a GPT partition scheme.

Then, why choose GDisk convert MBR to GPT? GDisk is actually designed for advanced users or user who is familiar with command-line operations. Command/Character User Interface (CUI) has the advantage of not much personal interfere asked during the process. You input the codes and the task will be done automatically, time-saving and effective.

How to convert MBR to GPT using GDisk in Windows?

As covered, you’ll need a WinPE bootable USB or Windows installation disc to run GDisk without Windows environment. Next,download the gdisk.exe and uncompress the package to another USB drive. Before you start, you might want to edit Registry Keys for AHCI in the UEFI firmware, and change SATA mode to AHCI from IDE in BIOS.

Note: Be sure that your computer’s motherboard supports UEFI mode. Or, you’ll get system unbootable. You can verify this by checking boot options in your BIOS or Google your own model number for sure.

1. Boot your computer with the bootable media or Windows disc. Press Windows + F10 to bring out Command Prompt after the loading.

2. Navigate to the USB drive you stored your GDisk files to and run “gdisk64.exe”, or “gdisk32.exe” if your computer is 32 bit.

3. Type “ \\.\physicaldrive#”. Usually, # is 0 which points to the first disk on the computer. Now, you’ll see a message about invalid GPT and valid MBR. Enter “y” to confirm the prompt.

5. Type “1” or the sequence number of your system partition, usually always 1.

7. Type “w” to write the changes to the table and exit. You can type “q” and Enter to cancel the changes if there is something wrong about previous operations. To cancel all operations made by GDisk and exit GDisk, you need to type “q” again.

8. Rebuild the Boot Configuration Data (BCD) and reboot your PC.

For sure, GDisk is quite easy and simple for user who has a lot of command-line operating experiences. However, for normal users, GDisk is quite a complicated and error-prone program. Most users love Graphical User Interface (GUI) software instead. What’s more, as a command-line utility, most operations are irreversible, even though there is a confirmation for you to quit what you’ve input, yet for common users, that is risky.

Fortunately, there is an outstanding alternative to GDisk that assists you completing the task in user-friendly interface and in a few clicks. You can use GDisk convert MBR to GPT without data loss, so does this software.

Better than GDisk to convert MBR to GPT without data loss

AOMEI Partition Assistant Professional has its own reputation in disk partition managing field. Except for basic disk and partition operations, this manager is good at converting MBR to GPT and vice versa without losing data. It works great on both system disk and non-system disk in Windows 10/8/7/Vista/XP.

No bootable media or Windows installation disc required, and no complex command-line inputs involved. Several clicks and a reboot will take care of the entire process. Now, you may want to learn the specific steps.

Step 1: Install and run this manager. To convert MBR to GPT, right click the disk you want to convert and select “Convert to GPT Disk” at the main interface.

Step 2: Click “OK” and “Yes” to confirm your operation at the pop-up window.

Step 3: That is the virtual result that has come into your sight. Click “Apply” and then “Proceed” to execute the pending operation. As stated, it will ask a reboot.

Step 4: Change Legacy to UEFI in BIOS and boot your computer normally. 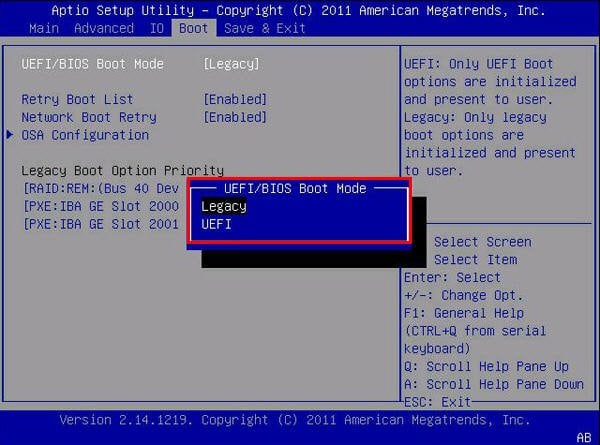 You May Also Like
Found Invalid GPT and Valid MBR in Windows – Quick Fix
Best Free Alternative to Fdisk for Windows 10/8/7
How to Convert MBR to GPT Using CMD without Data Loss?