This post will tell how to convert FAT32 to NTFS using CMD, and share a free 3rd party FAT32 to NTFS converter to change file systems between FAT32 and NTFS without losing data.

Why need to convert FAT32 to NTFS file system?

FAT32 and NTFS are two file systems commonly used on Windows operating system. Specifically, NTFS is relatively modern and usually used on newer versions of operating systems such as Windows NT, 2000 and later versions. FAT32 is an older file system and often used in the old windows version- Win 95/98/2K/2K3/XP. Apart from the compatibility with operating systems, they also have much difference. The most significant one should be their maximum single file and partition size.

▸The FAT32 can support a single file of 4GB at most: if you try to transfer a single file bigger than 4GB to a FAT32 partition, you will receive the error message saying the file is too large for the destination file system.

▸The FAT32 max partition size is 2TB: if you have a 3TB drive, you cannot format it as a single FAT32 partition. And Windows Disk Management and DiskPart can only help to format or create a FAT32 partition that is less than 32GB. To format a 32GB+ hard drive to FAT32, you need the third-party partition manager.

To break out the file and partition size limit, converting FAT32 file system to NTFS is a great choice because NTFS maximum file size is 16TB and it does not have a realistic partition size limit. Then you will need a FAT32 to NTFS converter. That’s exactly what we will talk about next.

The Windows built-in Command Prompt tool can be used as a free FAT32 to NTFS converter. That can convert a partition from FAT32 to NTFS while preserving the inside data. 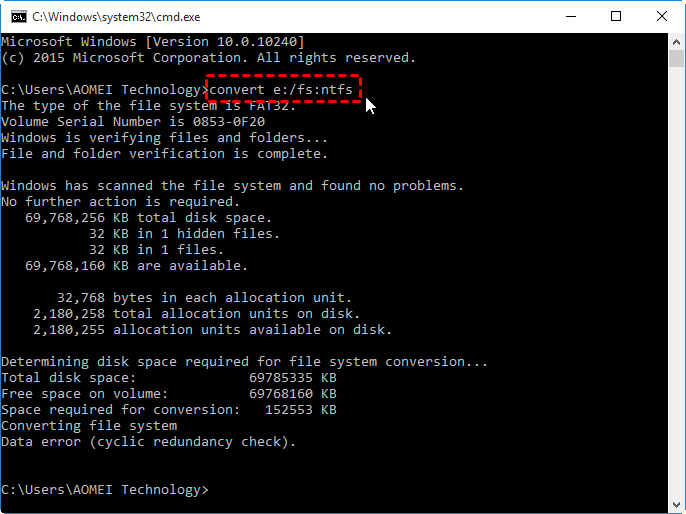 Wait for a while and the selected drive will be converted from FAT32 to NTFS. But you should note there is no command available to convert NTFS back to the FAT32 file system. To change an NTFS drive to FAT32, you have to back up any necessary files and then reformat this drive.

As mentioned above, Command Prompt only allows you to convert FAT32 to NTFS. What if you want to convert NTFS back to FAT32 so that you can use the it on Sony PlayStation, Xbox, Media Player, Mac, or other devices that only recognize FAT32 file system. Thus you can try the free partition manager named AOMEI Partition Assistant Standard. It has an “NTFS to FAT32 Converter”, allowing Windows PC users to convert file systems between NTFS and FTA32 without formatting/losing data. Compared with CMD, it has the following highlights:

You can follow the steps to learn how to convert FAT32 to NTFS, and NTFS to FAT32 in detail. First of all, please download the freeware and it is always wise to have backups of required files on the drive. 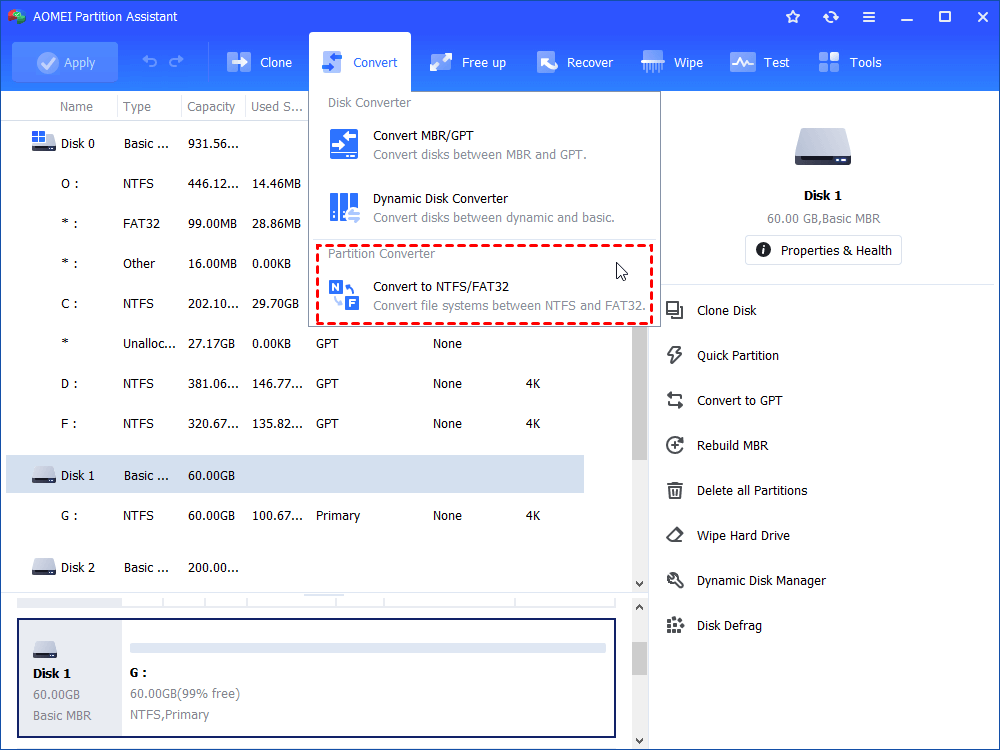 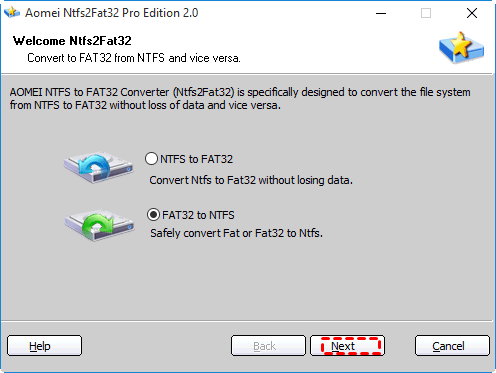 Step 3. Choose the FAT32 drive you want to convert to NTFS and click “Next”. 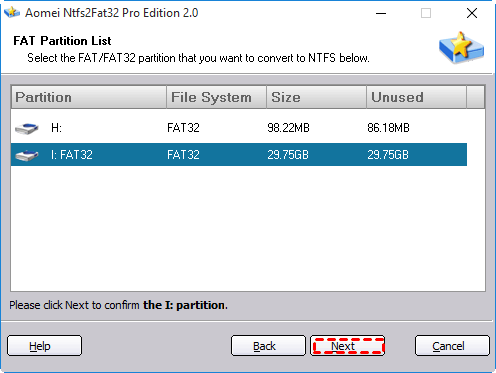 Step 4. Then confirm the operation and click “Proceed” to start the conversion. 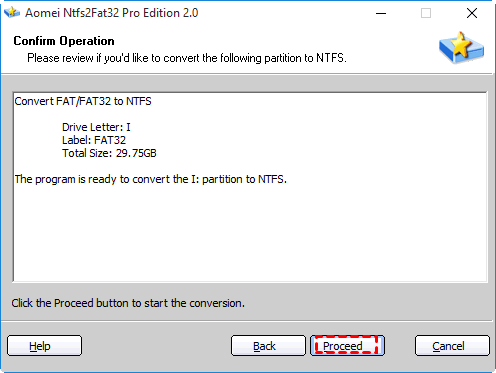 Step 5. After it is finished, click on “Finish” to return to the main interface and you can see the target FAT32 partition is converted to be NTFS now. 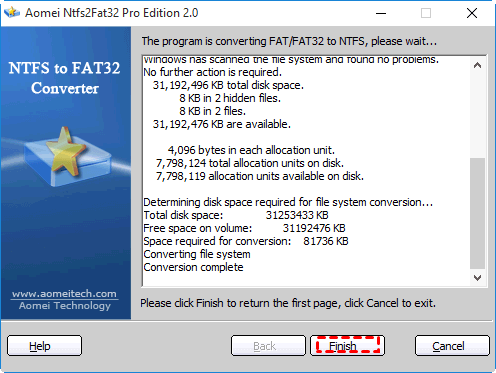 Above is how to convert FAT32 to NTFS. If you need to convert NTFS back to FAT32, just tick “ NTFS to FAT32” in step 2, choose the aim NTFS drive, confirm the operation and commit it. 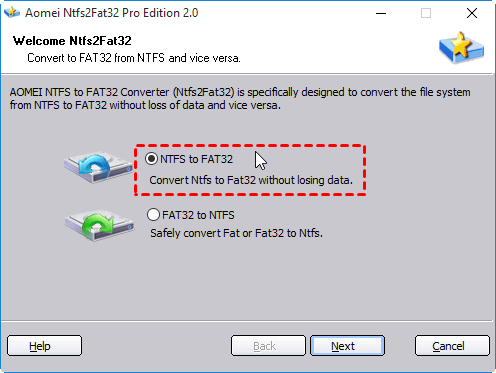 So, with the detailed tutorial, now you should know how to convert FAT32 to NTFS via CMD. And the free FAT32 to NTFS converter from AOMEI Partition Assistant enables anyone to easily convert file systems from FAT32 to NTFS, and NTFS back to FAT32 in Windows 10, 8, 7, and Windows XP/Vista. Much better than Command Prompt. Additionally, it is also able to clone partition, move partition, merge partition, check partition, etc.

To enjoy more advanced features such as converting boot disk between MBR and GPT without deleting partitions, converting dynamic disk to basic one without losing data, transferring OS to SSD, and more, you can upgrade to AOMEI Partition Assistant Professional. Moreover, there is Server edition compatible with both Windows Server 2019/2016/2012/2008/2003 and Windows PC.

You May Also Like
How to Convert Dynamic Disk to Basic Disk without Losing Data?
How to Convert GPT to MBR without Data Loss in Windows 10, 8, 7?
Partition Recovery Wizard: Recover Deleted Or Lost Partitions