With the AOMEI Partition Assistant Standard, you can easily finish Windows Disk clone for free in Windows 10, 8, 7 computer.

The reasons why users want to clone Windows hard disk are different from people to people, but they can be mainly divided into the following categories:

①Make a data backup
Cloning Windows hard disk allows you to make a complete backup of all data, including the OS and installed programs, stored on your Windows hard drive so that when the original hard drive fails, you can swap it out for the cloned disk instead of reinstalling everything from scratch.

②Replace an old Windows disk
The current Windows disk might get malfunction after a few years of usage and then slow down your computer. Replacing it with a new hard drive by cloning could help minimize data loss risk caused by hard disk failures and keep your computer run well.

③Expand a small Windows hard disk
When your Windows disk runs out of disk space and you are being troubled by “Low Disk Space” warning, cloning the Windows hard drive to another larger disk can help solve this problem.

④Enjoy better performance
If your Windows operating system is running on a traditional mechanical hard drive disk (HDD), cloning Windows Disk to SSD can help improve the overall performance of your computer since SSD provides faster reading and writing speed.

To clone Windows hard drive to SSD or HDD successfully and safely, the most convenient way is to make use of a Windows disk clone tool. But what is the best software to clone Windows disk? To save your time and effort, we highly recommend you trying the FREE AOMEI Partition Assistant Standard.

This freeware comes with the “Disk Clone” feature, which transfers all data from one disk to another by cloning the hard disk. And the cloned hard disk is bootable afterward. No matter you want to clone Windows disk to a smaller hard disk or a larger hard disk, you can get satisfied because it provides 2 different Windows disk clone methods.

Now we will demonstrate how to perform Windows disk clone to SSD in Windows 10/8/7 by using AOMEI Partition Assistant Standard. First of all, connect the destination SSD to your computer. If you are using a laptop, you might need something like a SATA-To-USB cable to connect the SSD to your computer. Make sure it is detected successfully. Back up important data inside because the cloning process will wipe the target disk.

The free standard edition only supports cloning MBR Windows system disk to another MBR disk. If you are planning to clone MBR Windows disk to GPT disk or GPT Windows disk to MBR/GPT disk, please upgrade to the Pro edition. Or you can convert the destination disk from GPT to MBR in advance. 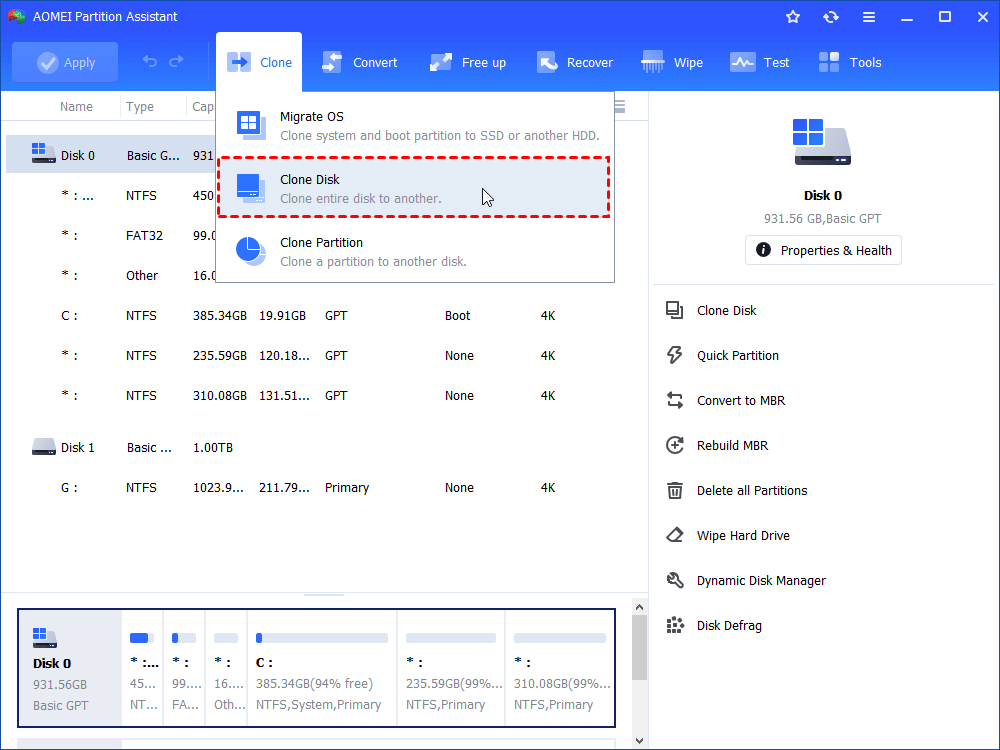 Step 2. Here, you can choose either “quick clone” in file by file or “complete clone” in sector by sector based on your specific situation. Then click “Next”. 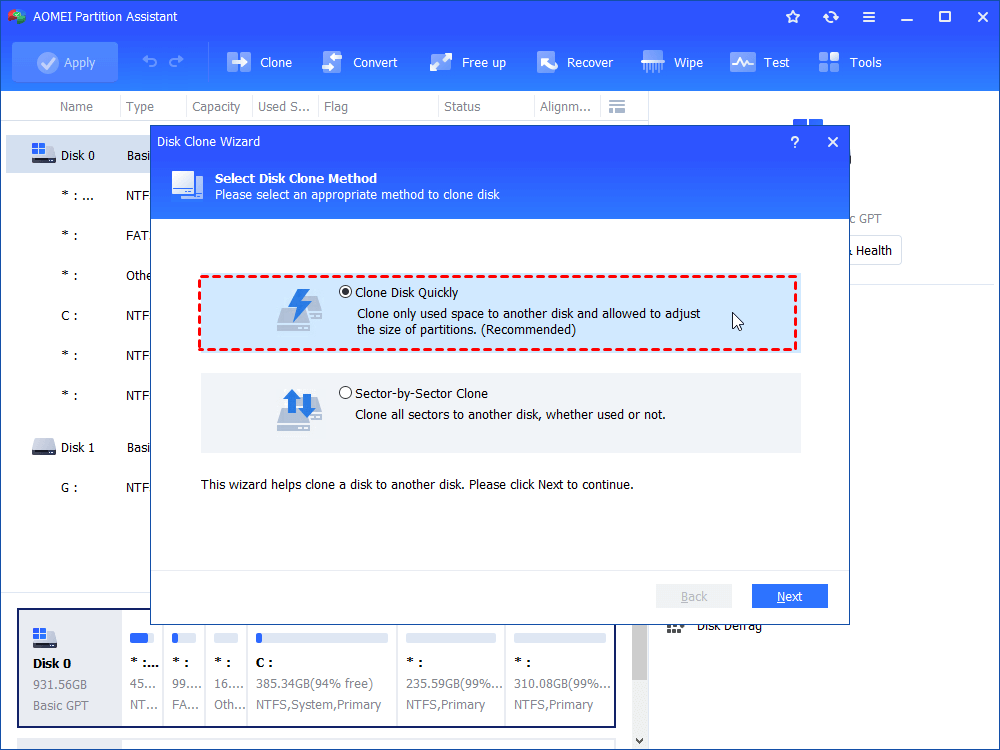 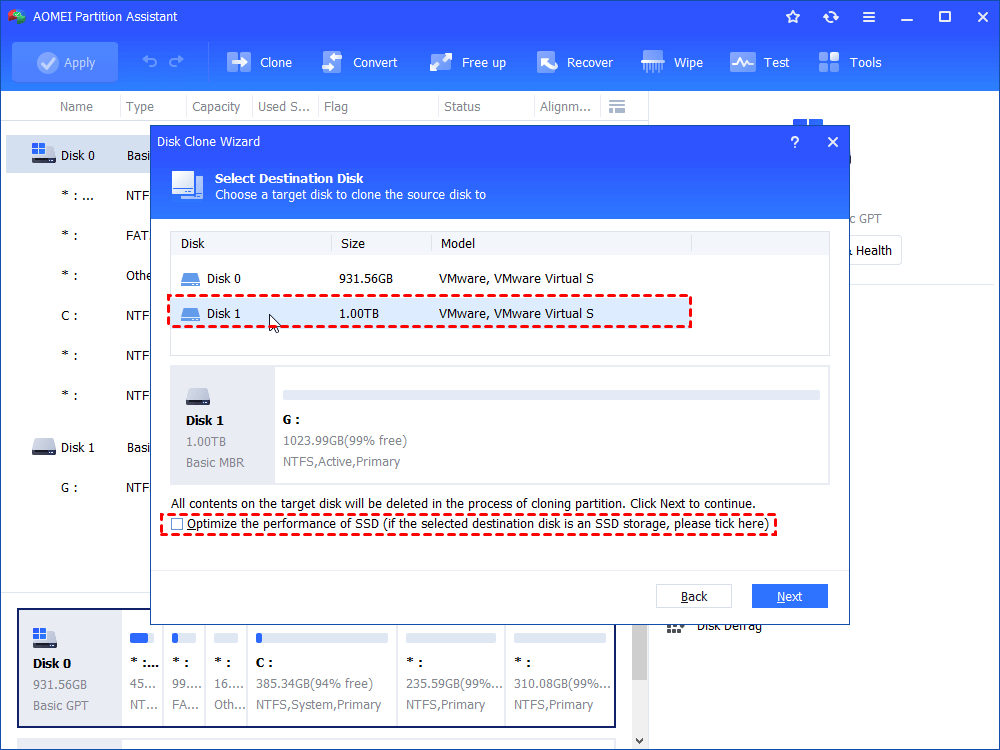 Step 4. Here, you can change partition size on the target disk if you choose “Clone Disk Quickly” in step 2, or keep the defaults (Clone without resizing partitions) and hit on “Next”. 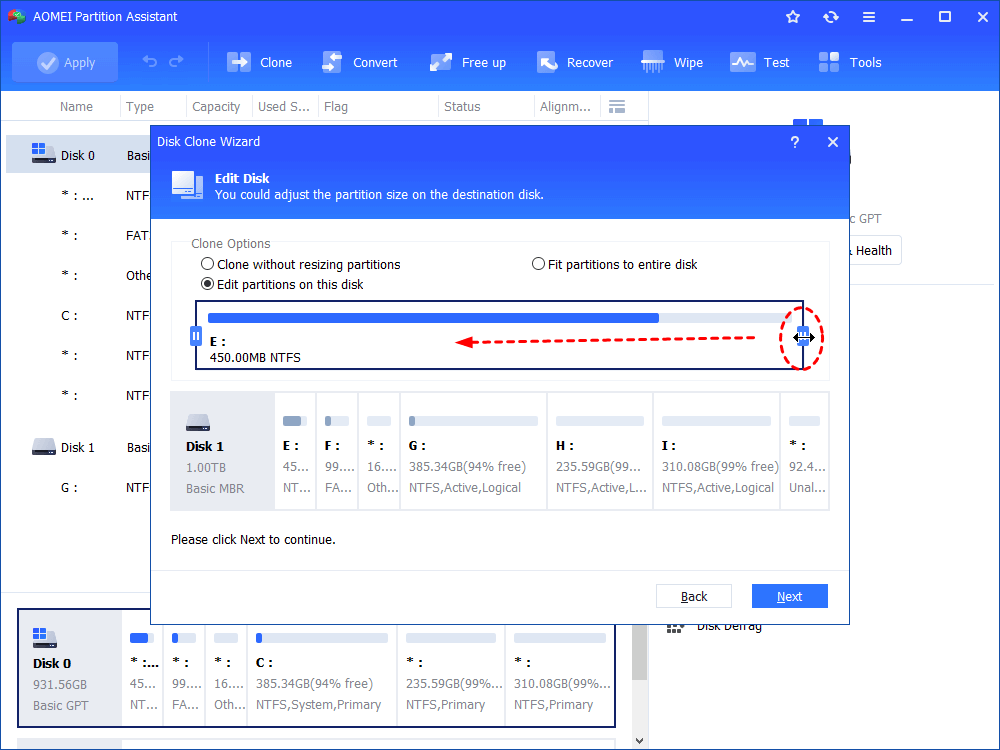 Step 5. Now, you will receive a note on how to boot from the cloned disk smoothly. Read it when necessary and click “Finish”. 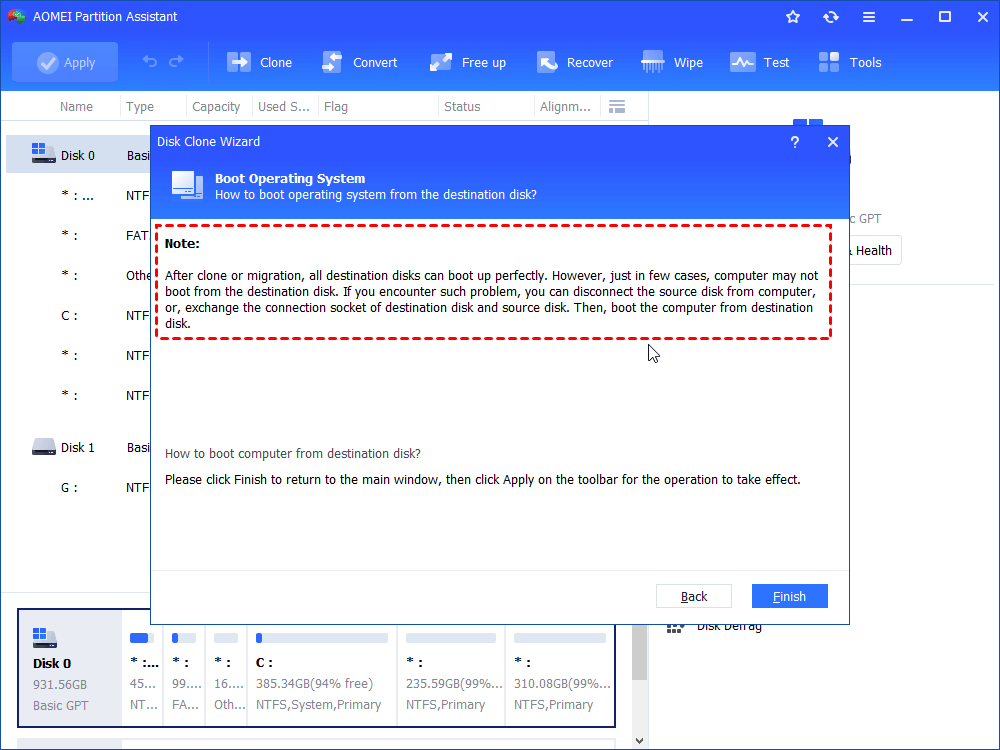 Step 6. Back to the main interface, click “Apply” to actually start cloning the Windows hard drive to another disk. 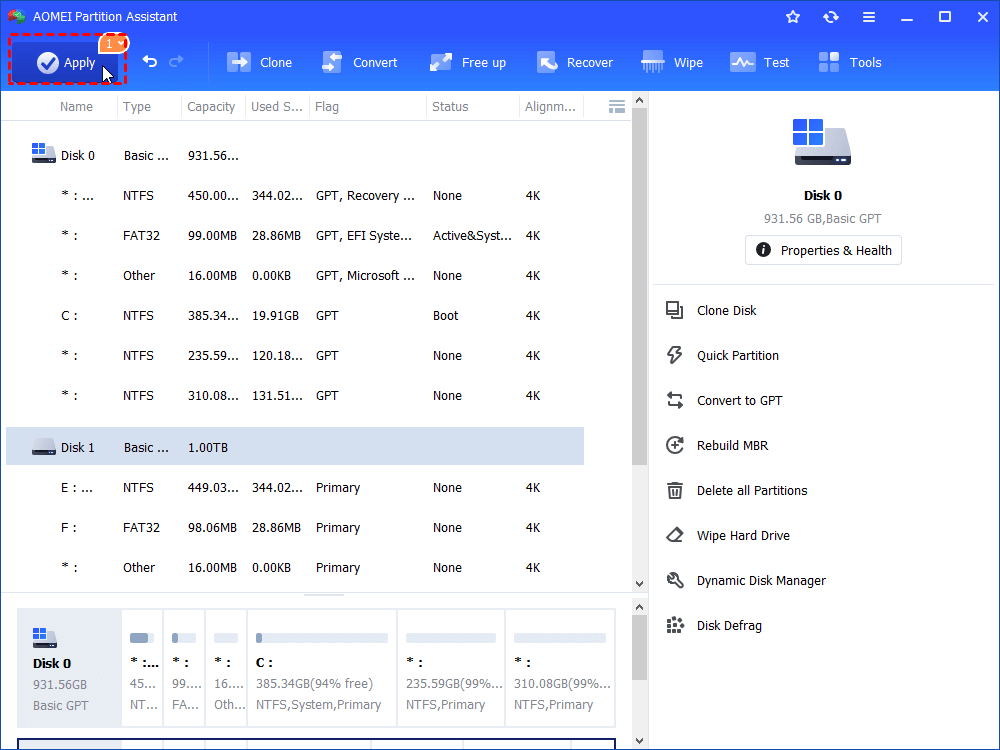 After cloning Windows disk to SSD or HDD, you need to change boot order in BIOS setup to boot computer from destination disk.

1. Start the computer and press ESC, F1, F2, F8 or F10 during the initial startup screen. Depending on the BIOS manufacturer, a menu may appear.

2. Choose to enter BIOS setup. Use the arrow keys to select the BOOT tab. System devices appear in order of priority.

3. To give the destination hard drive boot sequence priority over other disks, move it to the first position in the list.

4. Save and exit the BIOS setup utility.

5. The computer will restart with the changed settings.

The above content is how to clone the whole Windows disk (system partition and other data partitions) to another disk. But some users ask if they can clone just the Windows operating system. For this task, AOMEI Partition Assistant Standard also provides a great solution: “Migrate OS to SSD/HDD” wizard. This feature can help migrate only OS partition to another disk easily. But you should note: same as cloning Windows disk, this function only supports migrating OS from MBR to MBR disk.

As you can see, AOMEI Partition Assistant Standard is a free yet powerful Windows disk clone tool. With it, you can clone the entire system disk or only the system partition from one hard drive to another hard drive in Windows 10/8/7.

Furthermore, its Professional edition has many other astonishing functions, including recovering accidentally deleted boot partition, converting boot disk from MBR to GPT or GPT to MBR without data loss, quickly partitioning a hard drive and more. If your computer is running on Windows Server 2019, 2016, 2012, 2008, etc, you can try AOMEI Partition Assistant Server to clone Windows Server hard drive to another HDD/SSD.

You May Also Like
How to Clone Windows 7 to New Hard Drive Instead of Reinstallation?
Powerful OS Cloning Software – Clone Windows Drive to HDD/SSD
The Fastest Way to Copy/Clone USB Drive in Windows 10/8/7|Freeware Download