Although MBR2GPT utility is a good choice to convert MBR disks to GPT disks in Windows 10, some users are disappointed by MBR2GPT validation failed. Let’s go through the error and find out the solution to MBR2GPT Windows 10 disk layout validation failed issue in this page.

MBR2GPT is a tool designed by Microsoft to help people convert a boot disk from the Master Boot Record (MBR) to the GUID Partition Table (GPT) partition style without modifying or deleting data on the disk. It’s very useful when you own a hard drive larger than 2TB and want to make full use of it. It’s also imperative when you plan to create more than 4 primary partitions.

Now, Microsoft officially declared that Windows 11 system requires the UEFI boot mode if you plan to directly upgrade from Windows 10 via the "Check for Update" feature, so the requirements of conversion from MBR to GPT increase greatly. Despite the convenience MBR2GPT utility brings to us, some people are disappointed by MBR2GPT errors. Here is a user sharing the experience of encountering the MBR2GPT Windows 10 disk layout validation failed problem:

“I am using a 4TB HDD as a storage drive on my pc, with a 500GB SSD for the OS and other programs. I am only able to partition 2TB of my HDD due to it having an MBR partition style, and would like to convert it to GPT so I can use all of its available space. The 2TB partition is almost full and only has 67GB remaining, which is why I am trying to convert it.

After using the command 'mbr2gpt /validate /disk:1 /allowFullOS', I get the message 'Disk layout validation failed for disk 1'. How can I fix this?” 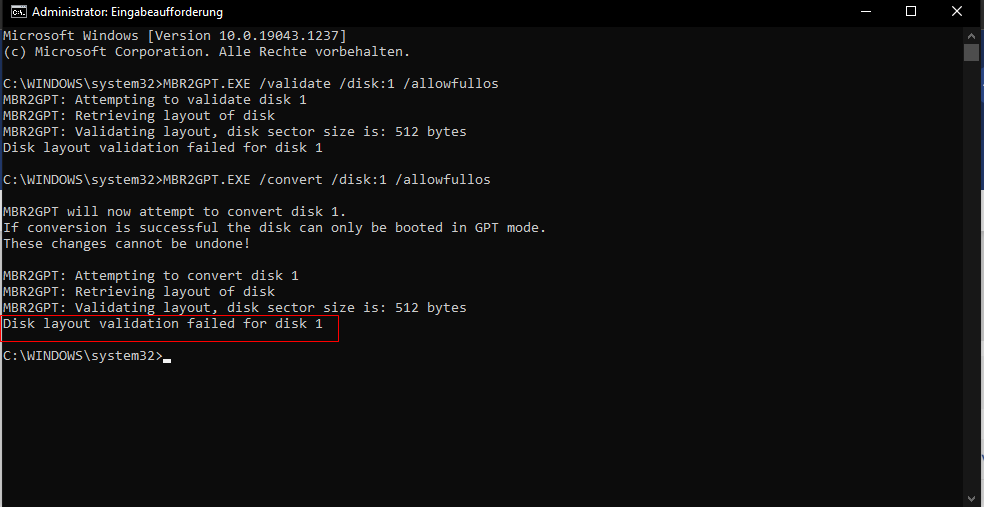 To solve the problem, we may figure out the causes first.

MBR2GPT program only applies to Windows 10 version 1703 (also known as the Creator's Update) or later. An inapplicable Windows system can lead to an MBR2GPT disk layout failure.

▪ if you are using a computer running Windows 7, 8, or 8.1, please upgrade the operating system to Windows 10.

▪ if you have installed earlier versions of Windows 10 such as versions 1507, 1511, and 1607, you must run the tool while booting into Windows 10 version 1703 or later and perform an offline conversion.

MBR2GPT is a tool to convert any attached MBR-formatted system disk to the GPT partition format. You cannot use it to convert non-system disks from MBR to GPT. If you do want to convert a data disk, you can convert MBR to GPT in Windows 10 via Disk Management or Command Prompt. However, you are at risk of losing data because you have to delete all partitions or volumes on the disk before conversion.

If you meet MBR2GPT conversion failure, you can turn to an MBR2GPT alternative-AOMEI Partition Assistant Professional that can help you convert MBR to GPT without data loss quickly and safely.

What’s more, it overcomes MBR2GPT’s shortcomings. For example, it applies to all versions of Windows 11,10  as well as Windows 7, 8/8.1, XP, and Vista. And it can not only convert a system disk from MBR to GPT but also a storage disk without deleting any partition or data. Next, I’ll show you how to fix MBR2GPT validation failed quickly via AOMEI Partition Assistant in detail:

PS.: you can download the demo version to have a free trial.

Step 1. Install and launch AOMEI Partition Assistant. Right-click the disk you want to convert and select "Convert to GPT Disk". 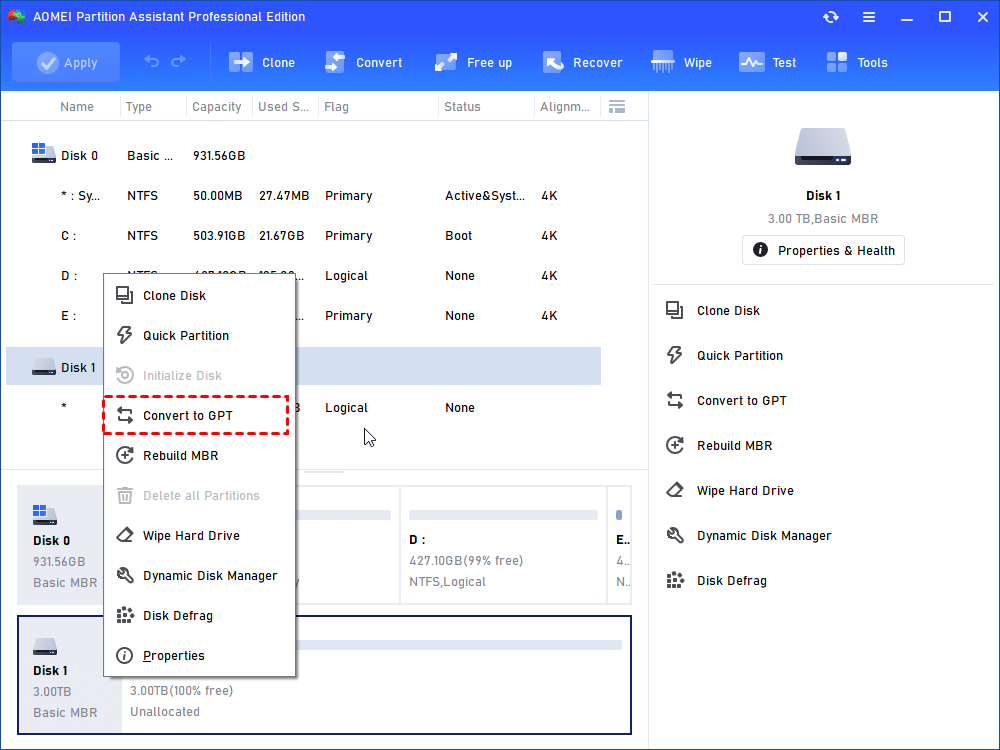 Step 2. Click "OK" in the pop-up dialog to confirm the operation. If you are converting a system disk, you will get a prompt that the GPT disk boots from UEFI mode. 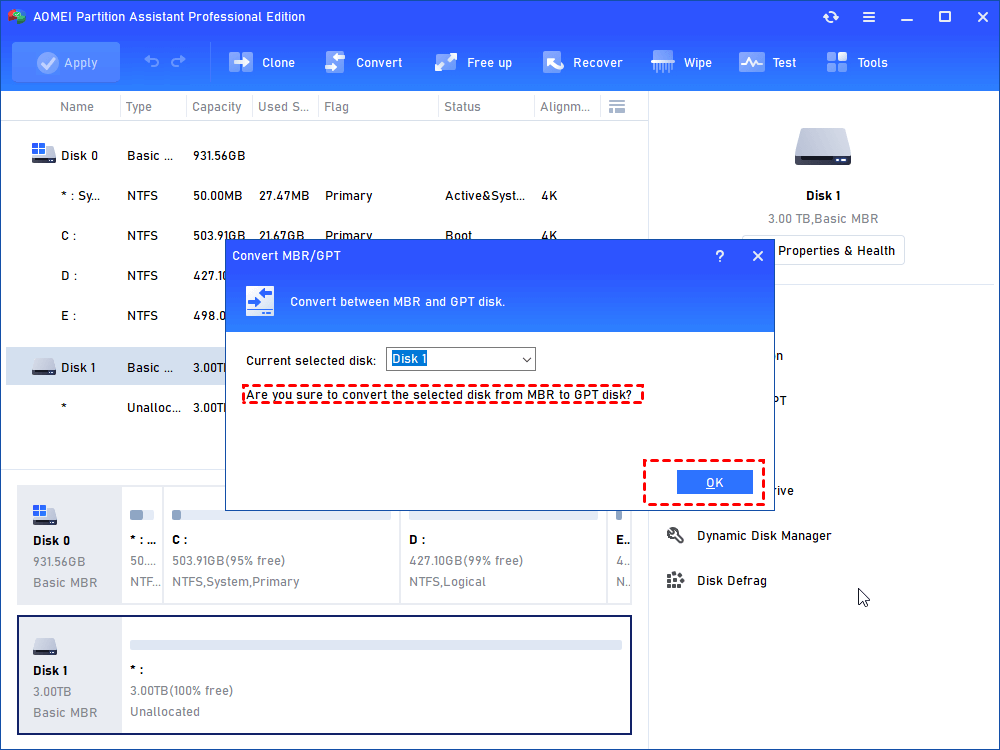 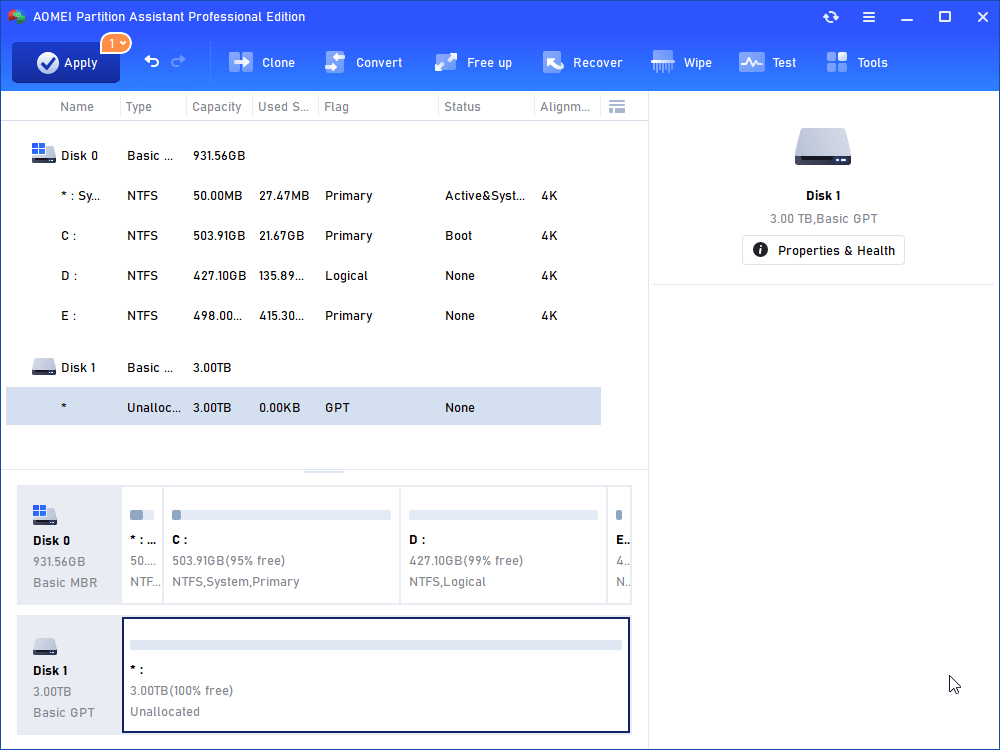 To use the MBR2GPT tool, you must run Windows 10 1703 or later versions, or you will meet the "MBR2GPT validation failed error". In such a situation, the best workaround should be using the  AOMEI Partition Assistant, which can realize MBR and GPT conversion on all versions of all Windows PC (including the most recently released Windows 11). Besides, it won't damage the data during the modification, an obvious advantage over Disk Management or Command Prompt.

Moreover, it comes with many other great features: clone MBR or GPT disk, transfer OS from GPT to MBR or MBR to GPT hard drive, recover lost partition, etc. If you are running Windows Server operating system, then the Server edition is worth trying.