How to Convert MBR to GPT without Data Loss in Windows Server 2008 R2?

Learn how to convert MBR to GPT in Windows Server 2008 (R2) without data loss, so that you can enjoy the advantages of GPT effortlessly.

For the different properties of MBR and GPT, you need to convert MBR disk to GPT in Windows Server 2008 (R2) sometimes. 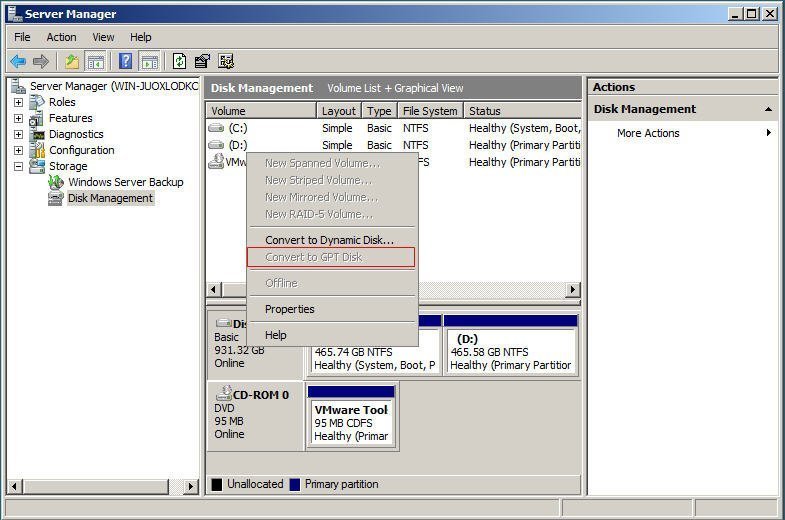 If you have partitions on the disk, to avoid data loss, you can back up the MBR hard drive at first; then delete all partitions, use Disk Management to convert it to GPT and restore data. Or you can use certain third party software to convert MBR to GPT without data loss in Windows Server 2008 (R2).

Please note before conversion:
▸Before you convert MBR disk to GPT, make sure your motherboard supports EFI/UEFI. Otherwise, you cannot boot successfully after the conversion.
▸Windows 32bit system does not work on a GPT disk. Thus, if your system is 32bit, the operation is unable to continue. You need to upgrade your system to 64bit.
▸To avoid data loss caused by inappropriate operations, it is advised to backup important files.

Step 1. Install and run AOMEI Partition Assistant Server. Right click the MBR disk that you need to convert to GPT and choose Convert to GPT Disk. 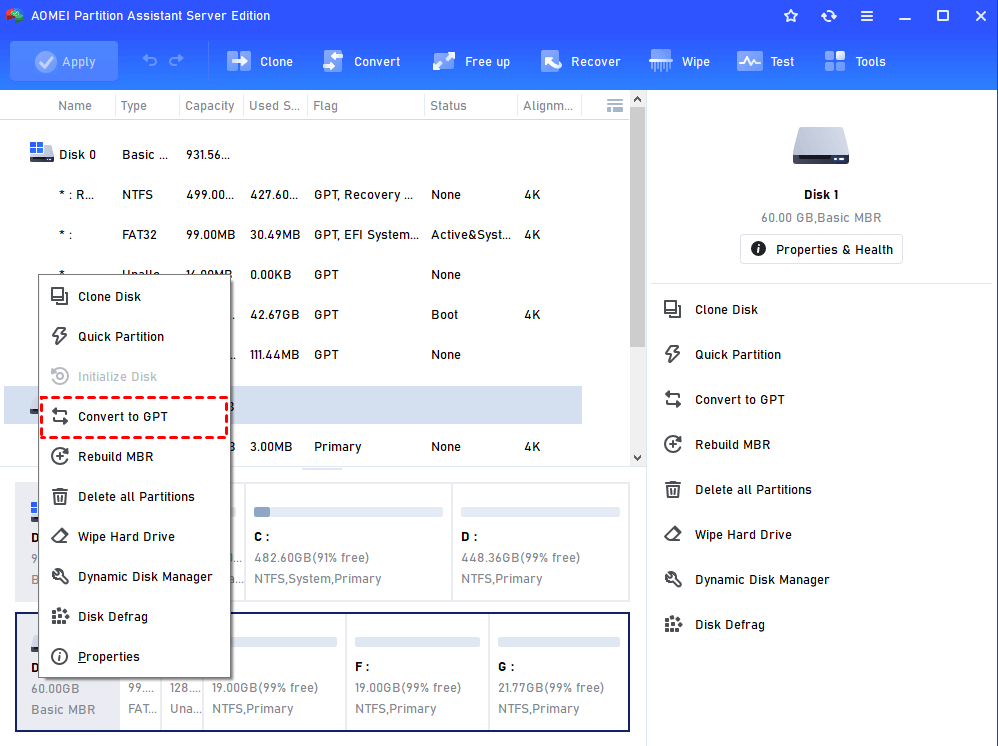 Step 2. It will pop out a window to ask if you are sure to convert the selected disk from MBR to GPT, click OK to confirm. 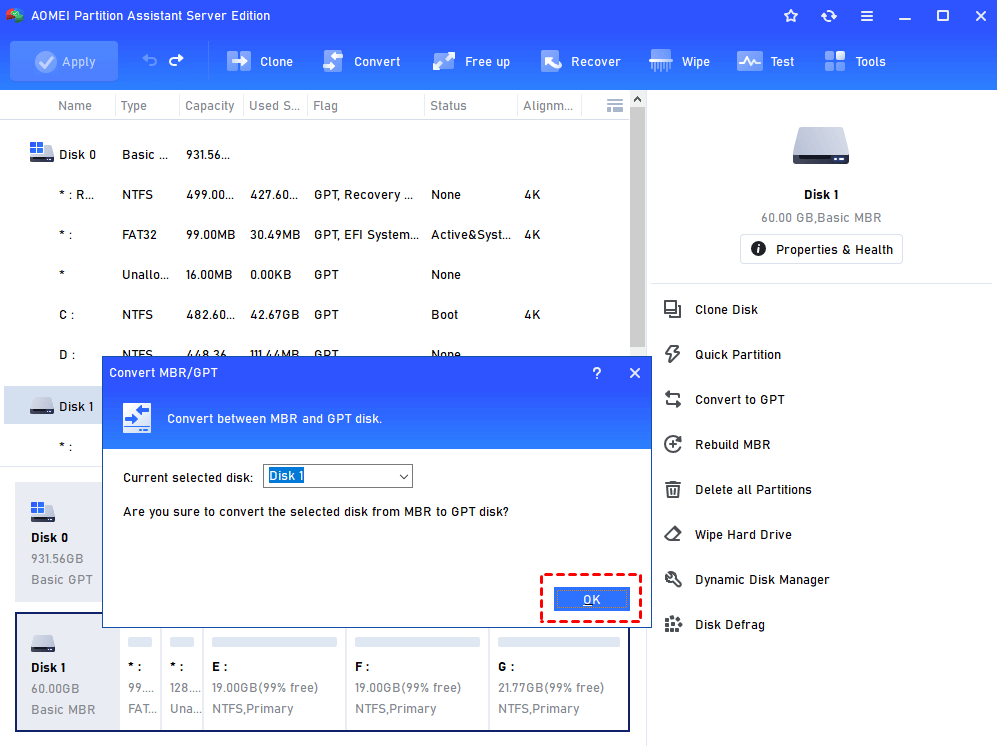 Step 3. You will back to the main interface and you’ll see the MBR disk has already changed into GPT partition type. Then, click Apply and Proceed to commit operation. 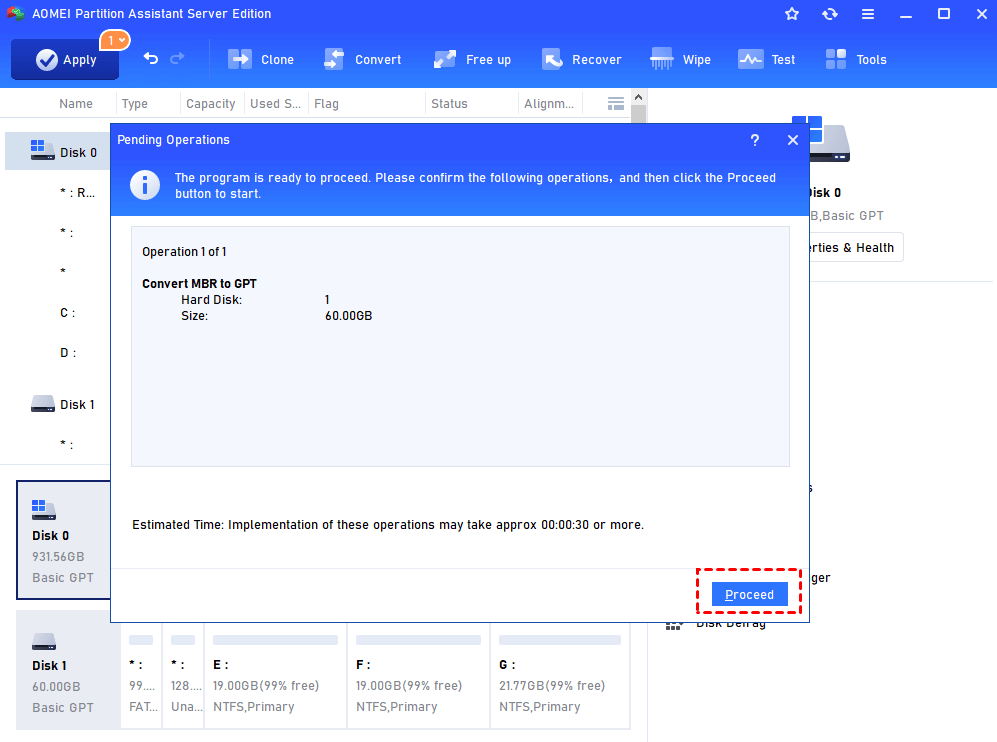 Tips:
▸If the system disk is involved, a reboot is necessary. After converting the system disk into GPT, you should change the boot mode to EFI/UEFI.
▸You are also allowed to convert GPT to MBR without data loss as well via AOMEI Partition Assistant Server.
▸To convert MBR to GPT, or convert GPT to MBR without operating system, you can first use the software to make a bootable media, from which you can boot your computer, and then convert disk in WinPE mode.

AOMEI Partition Assistant Server is a nice choice for converting MBR to GPT without data loss in Windows Server 2008 (R2), 2012 (R2), 2016, 2019 and Windows 10/8/7. In fact, it is more than an MBR GPT disk converter. As a great disk partition manager, it also provides you many other features for managing partition like splitting partition, moving partition and copying partition, etc.

You May Also Like
Convert VHDX GPT to MBR: to Fix P2V (Hyper-V) Conversion Failed
Analysis on MBR2GPT Conversion Failed and How-to Fix in Windows 10
Mirror Hard Drive to New Drive on Server 2008 (R2) for Upgrade or Backup