When the MBR2GPT.EXE failed during MBR to GPT conversion failed, you can read this article to learn the possible causes and the effective solution to converting MBR to GPT successfully.

What does MBR2GPT.EXE convert do in Windows 10?

MBR2GPT.EXE was first included in Windows 10 version 1703, also known as the Windows 10 Creator’s Update. It’s a built-in utility located in the Win\System32 directory and needs to be operated in Command Prompt as it doesn’t have a GUI. According to Microsoft, MBR2GPT.EXE is able to convert a system disk from Master Boot Record (MBR) to the GUID Partition Table (GPT) format without modifying or deleting any of the data on the disk.

Why do we need ‘MBR2GPT’ on Windows 10? In the past, when we convert between partition styles (MBR and GPT), we would need to manually copy all of files we wanted to keep to another drive, repartition the old hard drive, convert it, reinstall the operating system (if it was your Windows drive), and then manually restore the data. The entire process is extremely time-consuming and for the typical user there are a lot of important steps to remember and complete correctly.

The entire MBR to GPT conversion will however only take a few seconds if we use the built-in Windows MBR2GPT utility to convert any attached MBR-formatted system disk to the GPT partition format.

How to use MBR2GPT disk conversion tool properly?

The MBR2GPT commands are quite simple, but there are some things we should pay attention to before we start the conversion.

Matters that need attention:✎...
As we mentioned before, the MBR2GPT tool is only available in Windows 10 build 1703 or later. To find out which version of Windows 10 you have, you can open the Settings, navigate to System, then click About, scroll down a bit, and then you will be able to see the version number.
If the disk has a BitLocker-encrypted volume, it is suggested that you suspend BitLocker first before the conversion. To resume BitLocker, you will need to delete the existing protectors and recreate them.
Make sure the device you are using supports UEFI. nesciunt quidem.

2. (Optional) We can run "mbr2gpt /validate /disk:0" to check whether the disk is eligible to be converted. If any of the checks fails, the conversion will not go ahead, and you will receive an error message. 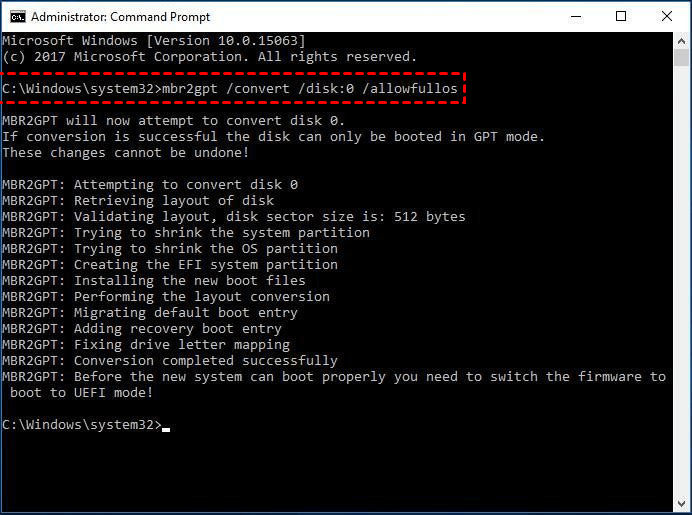 4. When the conversion has been successfully completed, we need to boot into the UEFI firmware settings, and switch the firmware to boot to UEFI mode instead of Legacy BIOS (CSM) (learn how to change Legacy to UEFI).

Tips:✎...
If get an application conflict error, then we suggest that you use MBR2GPT in the Windows PE environment. The command would change to: “mbr2gpt /convert /disk: n”.
The disk will be repartitioned to create an EFI system partition (ESP) if one does not already exist.
If you dual boot Windows 10 with any other operating system, then above tutorial is not suitable. This tutorial is only meant for a standalone Windows 10 installation.
If the existing MBR system partition is not reused as the ESP, it will no longer be used by the boot process after the conversion has completed. Other partitions will not be modified.
If the disk is already GPT-formatted, the tool will display an error message.

Why has MBR2GPT conversion failed and how do I fix it?

MBR2GPT works well for the majority of Windows users, however, in a limited number of cases MBR2GPT won’t be able to complete the conversion process. Let’s find out the reasons for the failures and what we can do to fix it.

According to Microsoft, MBR2GPT has following the error codes and each code has a corresponding description. From below chart, we can easily find out why our conversion failed and what we can do to fix the error. 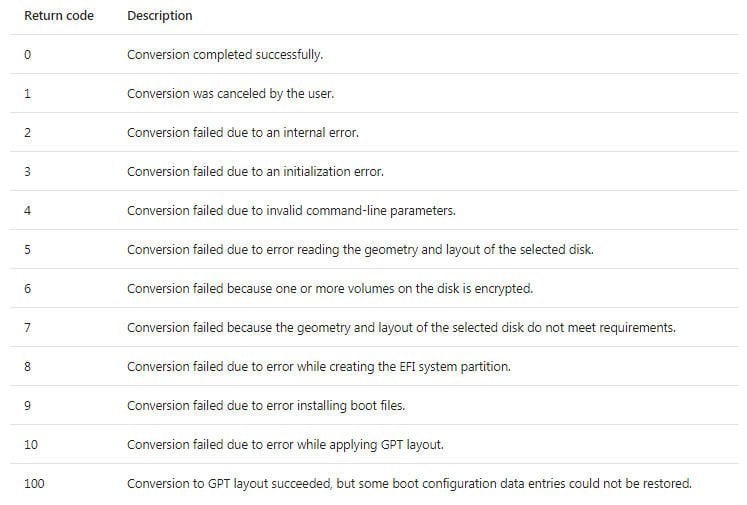 Sometimes, the MBR2GPT tool will give us an error message instead of an error code, usually the MBR2GPT will display this message when it has been used on an unsupported version of Windows 10. For instance, if we try to use MBR2GPT to convert a disk on Windows 10 build 1607, then the chances are that we’ll get this error:

Running on other older versions of Windows 10 such as build 1507 and build 1511 can also lead to the same error message. To fix this message, we can run the tool while we are using Windows 10 build 1703 or later (as mentioned before) and perform an offline conversion.

Some users report that MBR2GPT can’t find the operating system (OS) partition on disk 0 when they attempt to do the conversion. As mentioned before, MBR2GPT is designed to be used to convert any MBR-formatted SYSTEM disk (OS disk) to GPT. It won’t work for any data disks that don’t have an operating system (OS) installed on them.

If you want to convert a data disk from MBR to GPT, it’s suggested that you first backup all of your data and delete all of the partitions on the disk, then complete the conversion in Windows Disk Management. If the Windows 10 OS has been installed on the disk that you want to convert and you still get the error, then you will need some help from specialist MBR to GPT conversion software.

AOMEI Partition Assistant Professional is a reliable and powerful hard drive partition manager that can help us convert both system and data disk from MBR to GPT without modifying or losing any data in all Windows 10 versions  as well as 7, 8/8.1/11, Vista, and XP.  It has user-friendly interface that is suitable for every computer user and doesn’t need to be accessed through command line like MBR2GPT.exe.

With this software, you can get rid of  the problems we mentioned before including the "MBR2GPT conversion failed" issue. Other issues like "MBR2GPT not found", "MBR2GPT missing", "MBR2GPT cannot perform layout conversion", "MBR2GPT failed to retrieve geometry for disk 1" and "MBR2GPT can only be used from the Windows Pre-Installation Environment" can be fixed at the same time.  What’s more, AOMEI Partition Assistant also allows users to convert GPT to MBR in Windows 10, 11, 8, 7, XP and Vista.

1. Download, install and launch this MBR2GPT alternative. In the main window, right click the disk you want to convert and select "Convert to GPT Disk".

2. Click "OK" in the pop-up box to confirm the operation. It will prompt us that GPT boots from UEFI mode rather than BIOS.

3. View the virtual result. The disk has changed to GPT disk from MBR and all partitions and data are kept the same. Click "Apply" then "Proceed" to start the pending conversion.

★Helpful Tips:
Remember to switch the firmware to boot from UEFI mode after the conversion.
To convert from MBR to GPT in the Windows PE with AOMEI Partition Assistant, we should use the ‘Make Bootable Media’ feature.

Now, you must know what to do when the MBR2GPT conversion failed. The recommended AOMEI Partition Assistant Professional can make up the limitations of MBR2GPT.EXE and also provide many other amazing features, such as converting file systems without formatting the drive, cloning MBR/GPT hard drive, migrating OS between MBR and GPT disk without boot issue. If you want to convert MBR to GPT in Server 2012 or Server 2016, please refer to AOMEI Partition Assistant Server edition.

You May Also Like
How to Fix MBR2GPT Error in MBR to GPT Conversion in Windows 10?
Quick Fix to MBR2GPT Validation Failed
Find The Best Alternative to MBR2GPT Disk Conversion Tool