MBR and GPT in Windows Server 2012

Convert MBR to GPT in Server 2012 with built-in tools

If the need arises, Windows Server 2012 provides snap-in tools which can assist you with the conversion. These come in two forms, Disk Management which has a graphical user interface and DiskPart which can be accessed via CMD prompt.

Before you proceed, it is important to note that both of these tools only support converting an empty disk between MBR and GPT. Disk Management in Windows Server 2012 is unable to convert a running system disk from MBR to GPT. If you prefer to convert the system disk with DiskPart, an installation disk will be required.

The quickest way to access Disk Management in Windows Server 2012 is to right click on the bottom left corner of the desktop to open the Quick Access Menu. Disk Management will be listed there. Since Disk Management only supports converting empty basic disk to GPT, you will need to delete all of the partitions or volumes on the disk, or you’ll find the Convert to GPT Disk option is grayed out.

1. Right-click the partition and select "Delete Volume" to delete the existing partition on the hard drive you want to convert to GPT in Windows Server 2012. It is advised that you backup any important data before formatting your disk. 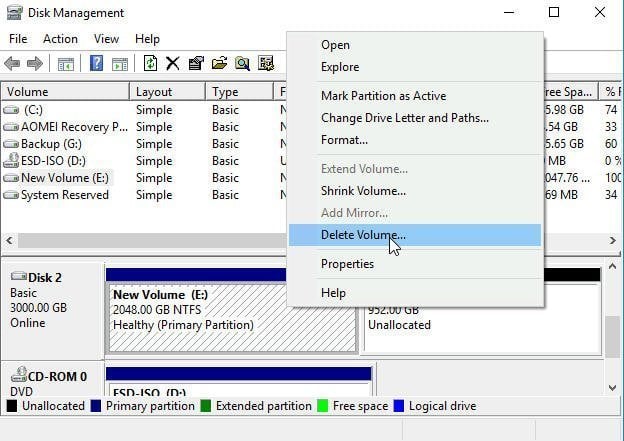 2. After deleting all of the volumes, right click the disk and select "Convert to GPT Disk". It will take a few minutes for the conversion to be completed. 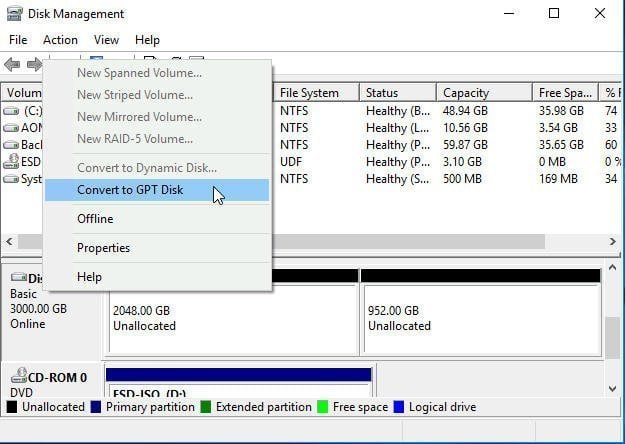 ★Tips:
Before you convert any disks, you should close any running programs.
You can't use GPT on any removable media (such as USB flash drives).

As we mentioned before, you can't convert a disk that is running Windows Server 2012 to GPT as Windows will not allow you to delete a system drive before converting. You can use DiskPart combined with an installation disc as a workaround for converting MBR to GPT in Windows Server 2012.

▶ Convert from MBR to GPT in Server 2012 with DiskPart.exe

First, you must backup any files that you require prior to the conversion. If necessary, you should backup the entire hard drive to alternative storage that you will not be converting to GPT.

1. Shut down your Server 2012 and insert the Windows Server installation disc and then boot from the disc.

2. Press Windows+ R, input "diskpart" and hit Enter to open the Diskpart utility. Next, input the below commands into Command Prompt to convert the disk to the GPT partition table.

Tip: All data will be wiped after this conversion. If you have created any backup images you can use this to restore your data. Diskpart can also be used to convert any non-system drives to GPT in the Windows environment.

Whilst these tools are simple to use, they will also cause permanent data loss if you forget to back up your files. Even if you remember, backing up and restoring your files will cost much time and effort. If you don’t have a Windows Server installation disk handy you will have no way to convert your system disk to GPT. Luckily, you can easily evade all of these common issues under the help of third-party software.

AOMEI Partition Assistant Server allows you to preserve your system files and personal data on your disk while converting to GPT. It offers technology that can assist you in converting MBR to GPT in Server 2012 (R2), 2016, 2019, and 2022 without deleting or formatting partitions or volumes.

Steps to convert MBR to GPT in Server 2012 without deleting partitions/data:

Step 1: Install and start AOMEI Partition Assistant. On the main window, right click on the disk you want to convert to GPT in Server 2012 and select "Convert to GPT Disk" from the drop-down menu. 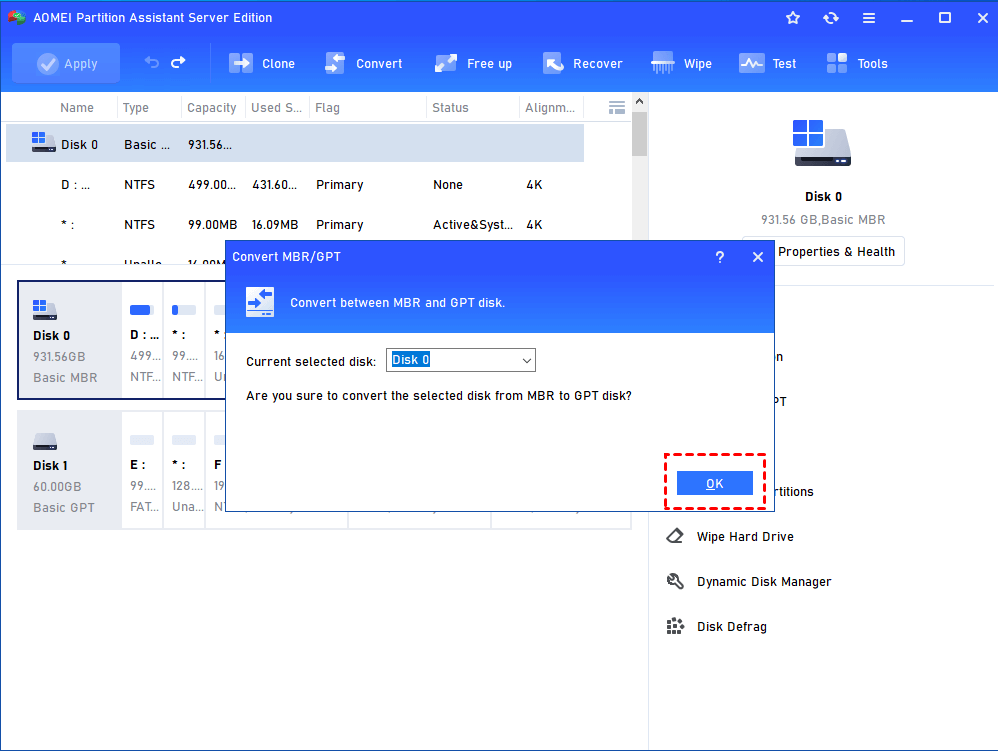 Step 3: Finally, click on "Apply" in the top left corner to start the task.

Helpful Tips:✎...
A reboot is required for the conversion.
It is important that you backup the files that you care about because data loss could occur in abnormal circumstances.

There are many ways to convert MBR to GPT in Windows Server 2022, 2019, 2016, 2012, 2008, and 2003, however, the simplest way to convert the system disk to GPT without data loss requires many steps and including backing up and restoring your files. AOMEI Partition Assistant steps in where the Windows Server 2012 built-in tools fail. Partition Assistant is not just for converting between partition tables but is also great for converting between NTFS and FAT32 file systems.