Need to mirror an MBR HDD to GPT HDD or SSD in Windows Server 2012 (R2) with secure boot? You can employ a great disk cloning tool, AOMEI Partition Assistant Server.

“I have a 2TB hard drive on my Server 2012 computer, but it is dying, so I bought a replacement 3TB hard drive. The old hard drive is initialized to be MBR, while new hard drive requires GPT partitioning to take advantage of the increased capacity. Now I want to mirror the entire contents of my old MBR HDD to this new GPT HDD. Is there any way that allows me to clone the MBR disk to the GPT disk in Windows Server 2012? Thank you in advance.”

Overview of MBR and GPT

▪ Disk size: MBR disk supports up to 2TB capacity while GPT disk can support large hard drive over 2TB.
▪ Partition number: MBR disk allows you to create up to 4 primary partitions. If you need more partitions, you can convert one primary partition to extended partition, so that you can create more than 4 partitions on the MBR disk. GPT disk allows you to create up to 128 primary partitions on the disk.
▪ Boot mode: MBR disk adopts the Legacy BIOS boot mode while the GPT disk requires the UEFI or EFI boot mode.
▪ Supported OS: all Windows can boot from MBR disks. Only 64-bit versions on UEFI-based Windows 11/10/8/7/XP/Vista and Windows Server 2003/2008/2012/2016/2019/2022 can boot from GPT disks. On 32-bit version, GPT disks can only be used as data disk.

Why need to mirror MBR HDD to GPT HDD?

Due to the difference between MBR disk and GPT disk, you may want to upgrade your MBR HDD to GPT HDD. For example, if the Windows Server 2012 (R2) hard drive keeps filling up (2TB), you can upgrade it to a larger disk over 2TB which is of GPT partition style.

To mirror MBR HDD to GPT HDD in Server 2012 (R2), the easiest and most effective way is to make use of an HDD mirroring utility. AOMEI Partition Assistant Server should be the best choice for this task. Its disk cloning feature can help move all data from one disk to another. Besides, two different disk copying methods are available to choose based on your situation:

Here we will take how to mirror an MBR system HDD to GPT HDD in Windows Server 2012 (R2) as an example.

▪ Connect the destination GPT HDD to your Server computer and make sure it is detected successfully.
▪ Back up important data on the GPT HDD in advance since the cloning operation will erase all contents on it.
▪ Windows 32bit system does not work on a GPT disk. Thus, if your system is 32bit, the operation is unable to continue. You need to upgrade your system to 64bit beforehand.
▪ Make sure that your motherboard supports EFI/UEFI since you have to change boot mode from BIOS to UEFI after mirroring system MBR disk to GPT disk.

Note: It's available to download the demo version of AOMEI Partition Assistant Server to have a try at first!

Step 1. Install and launch AOMEI Partition Assistant Server. It will show you the basic environment of your hard drive(s) on your computer. To mirror MBR HDD to GPT HDD on Server 2012 (R2), here you should right-click the MBR HDD, select Clone Disk. 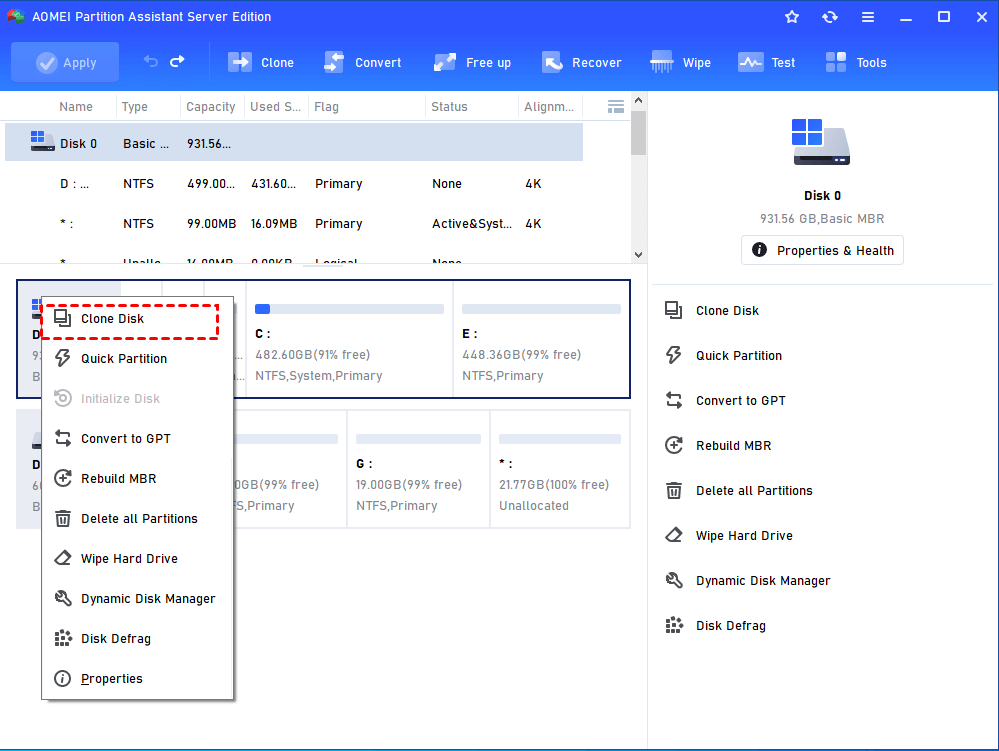 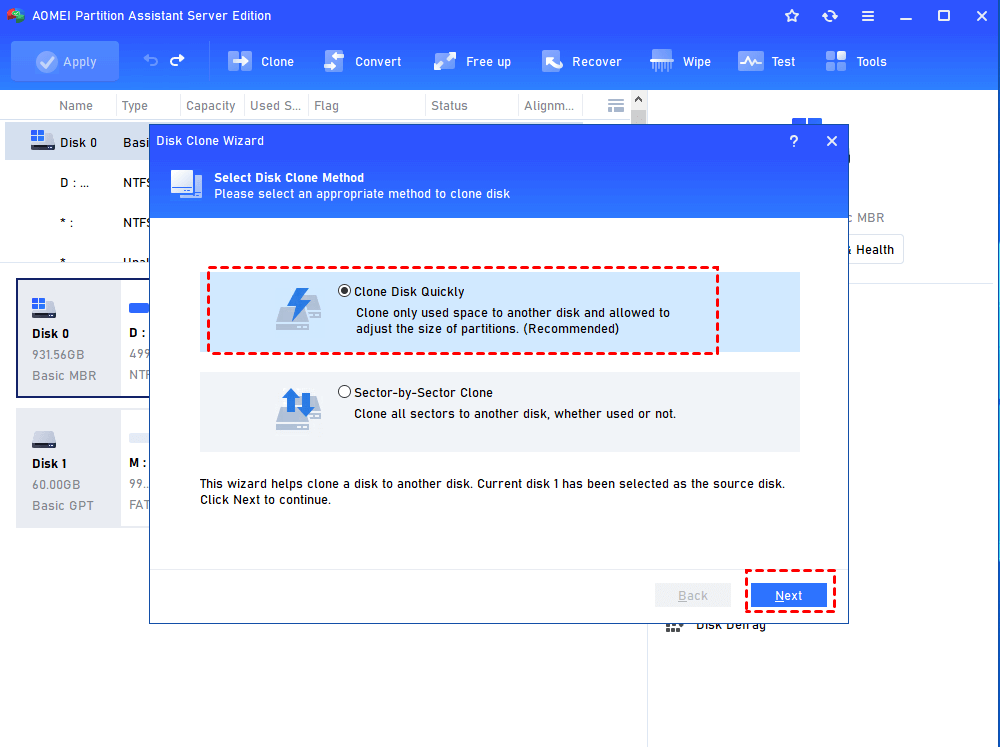 PS.: if you choose Sector by sector copy, the AOMEI Partition Assistant will convert MBR to GPT in Windows Server 2012 (R2) first, then, start copy.

Step 3. Select the GPT HDD as the destination disk, click Next. If you plan to clone MBR HDD to SSD drive someday, you can tick "Optimize the performance of SSD". 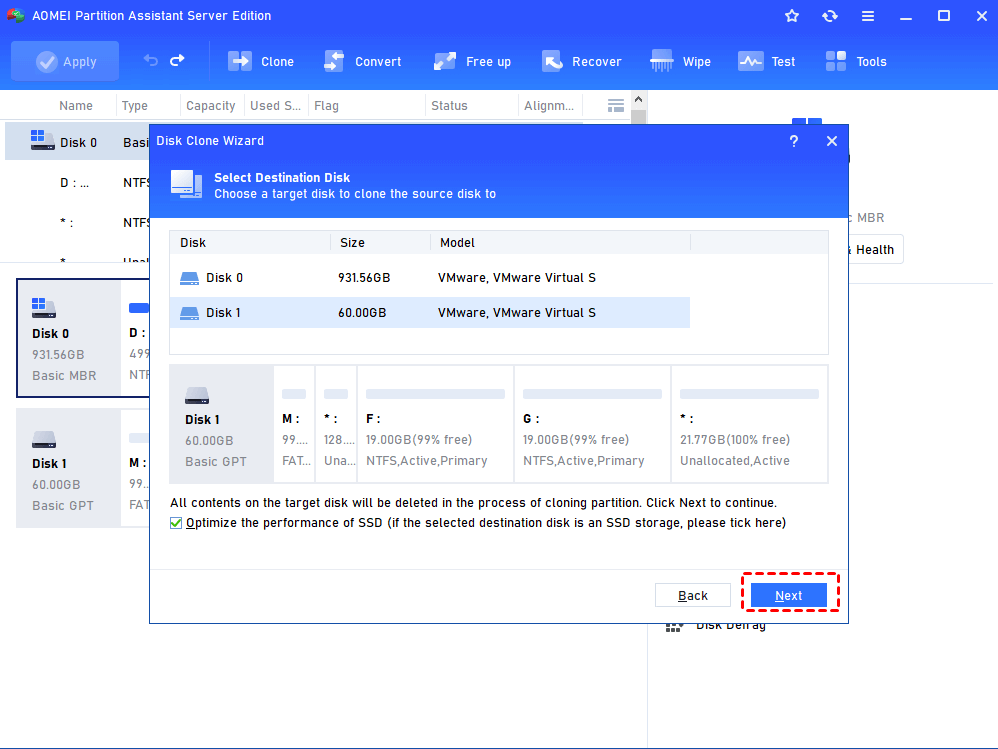 Step 4. Then, you can edit the partition size on the destination disk. Or you can resize Windows Server 2012 partition later with AOMEI Partition Assistant Server. 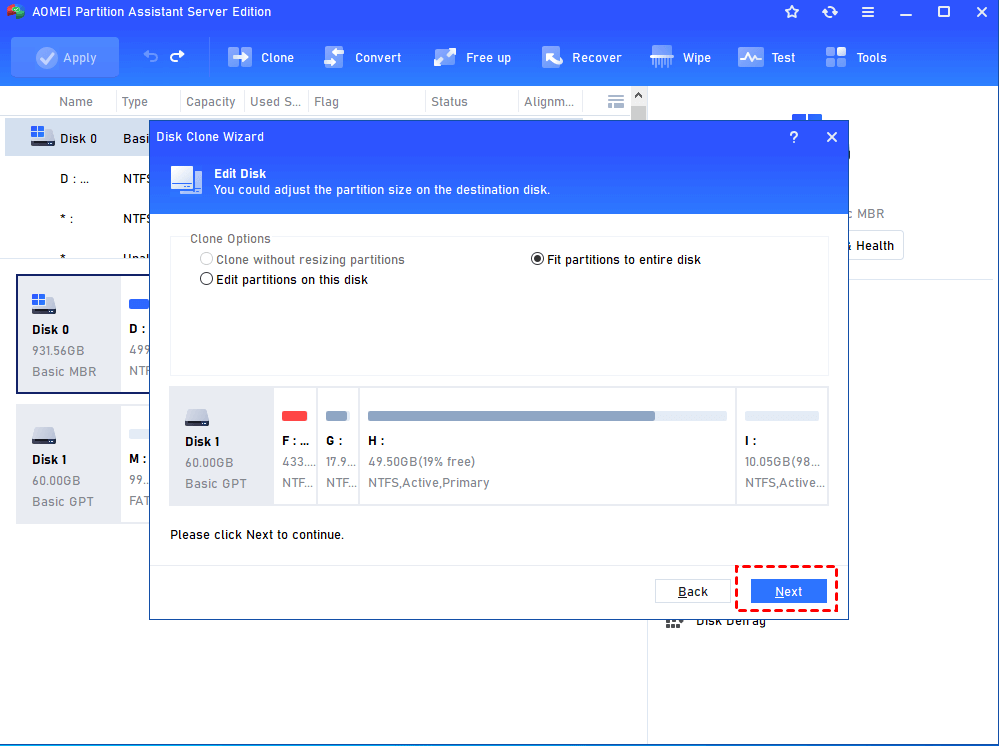 Step 5. It will give you a note for how to boot from the cloned partition, you can read it carefully, and then click Finish. 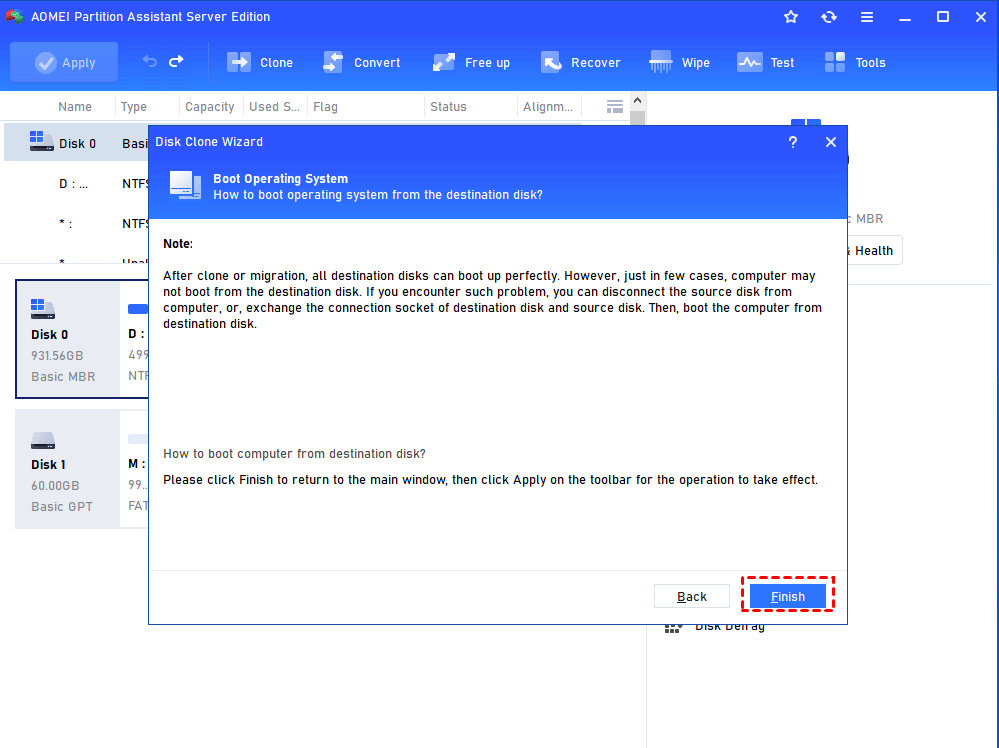 Step 6. You will back to the main interface, and click Apply at the toolbar to submit the pending operation. 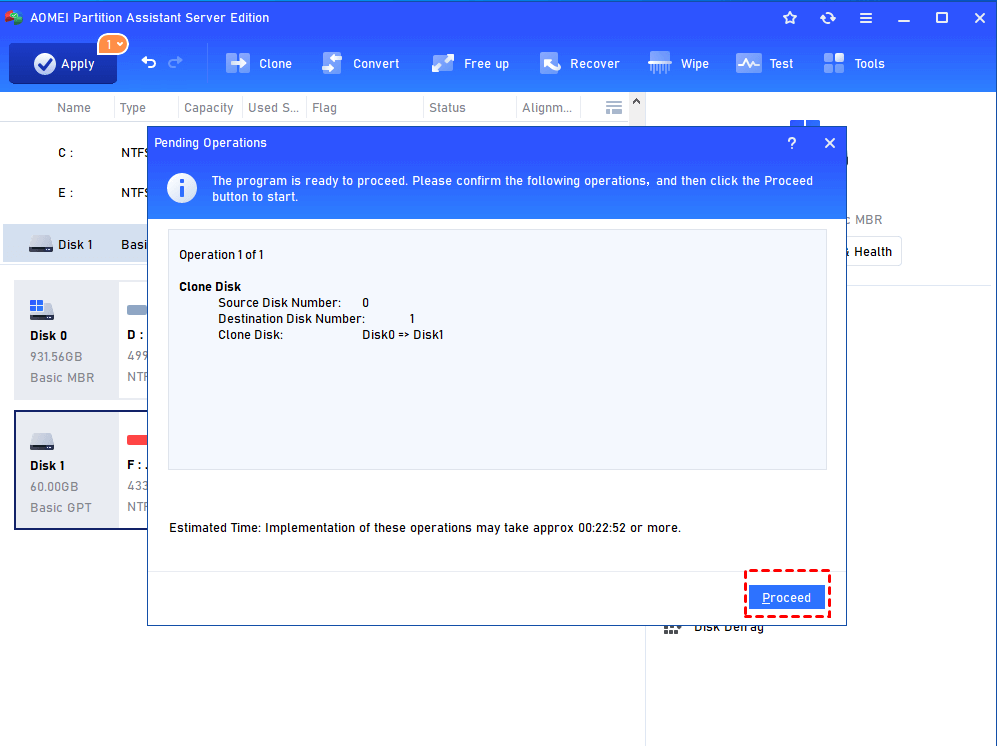 After the cloning process is completed, you can replace the old MBR disk with the GPT HDD, and enter BIOS to change boot order, placing the GPT disk in the first order in the boot priority. Then boot your computer from the destination disk.