How to Put Windows 10 on SSD from HDD without Reinstallation?

If you are trying to put Windows 10 on SSD from HDD, you can try the AOMEI Partition Assistant software, which can help you put your Windows 10, 8, 7 OS on an SSD from HDD without reinstalling everything from scratch.

Should Windows be on SSD or HDD?

HDD and SSD are two types of hard drive. Some computers use the HDD as the primary hard drive while others use the SSD as the boot drive. Only few of them have both of them, with the SSD for OS and the HDD for the data storage supplement. If you don’t know which one Windows should be installed on, you can check the comparison table to learn their main differences (advantages and disadvantages) and make a wise choice.

How to put Windows 10 on SSD from HDD?

It is clear that installing OS on an SSD drive can help speed up everything, but most prebuilt computer used the HDD as the boot drive. Then how can you put your Windows 10, Windows 8 or Windows 7 on SSD from HDD? A guaranteed way is to remove the HDD, clean install Windows and other programs onto the SSD, which will cost lots of time and energy.

Luckily, there is another much easier way to move Windows OS onto SSD from HDD. That is using an OS migration tool: AOMEI Partition Assistant Professional. Its “Migrate OS to SSD Wizard” can migrate system partition from one disk to another one (HDD/SSD) with secure boot. So you can directly transfer Windows 10 onto SSD from HDD and boot from the SSD after migration. The following are detailed instruction:

Before proceeding, please note:
▸Connect the SSD to your computer and verify it is detected. Make sure the SSD comes with an unallocated space, which is larger than the Windows partition on the HDD.
▸If you are putting Windows 10 onto GPT SSD from MBR HDD, please ensure your motherboard supports UEFI or EFI boot mode since it is necessary to change Legacy to UEFI afterward so that you can boot from the SSD successfully.
▸If necessary, you can convert SSD to GPT or MBR, making it as same as the partition style of the source HDD.

Now, you can try its Demo version and refer to the following steps of how to put Windows OS on SSD from HDD.

Step 2. Select an unallocated space on the destination SSD and click “Next”.

Step 3. Now you can resize the partition just being created on the SSD drive as you need. Then, click “Next”.

Step 4. A note about how to boot OS from SSD or HDD will appear, you can read it and click “Finish”.

Step 5. Click “Apply” on the top right corner to commit the operation.

When the process is finished, the current Windows 10/8/7 partition has been put onto the SSD from the HDD. To boot computer from the destination disk, you can remove the HDD and install the SSD, or you can keep both of them if there is an extra drive bay (in this case, you need to enter BIOS and move the SSD to the first place of the boot order).

Another feature to put Windows 10 on SSD from HDD

The above is how to reinstall Windows OS on SSD from HDD via moving only system drive to SSD. If you want to move everything (both OS and other personal data) from HDD to SSD, you can try its “Disk Clone Wizard”, which will the entire HDD including all partitions to SSD and make the destination disk bootable as well. 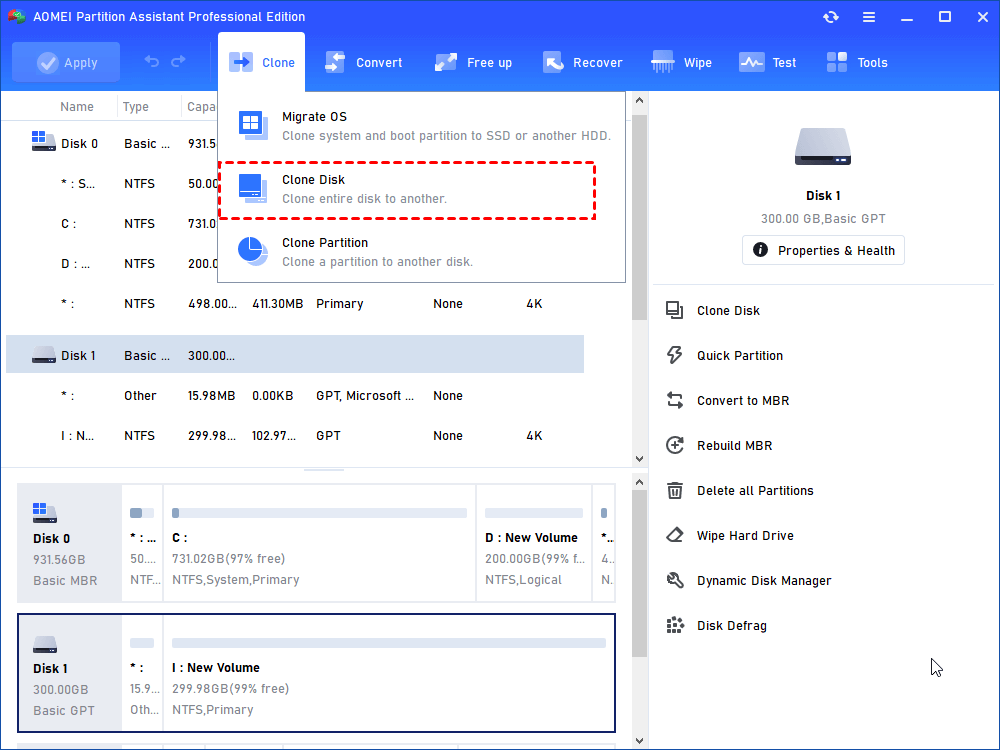 So, this is how to put Windows 10 on SSD from HDD via AOMEI Partition Assistant Professional. Moreover, you can also use it to align SSD partitions, which can further improve SSD read/write performance. If you want to free up space on the old HDD after OS migration, the “Wipe Hard Drive” function can help you a lot. To put Windows Server OS onto SSD from HDD, please try AOMEI Partition Assistant Server.