With the AOMEI Partition Assistant Standard, you can migrate Windows 10 to SSD drive directly instead of performing a clean installation.Check out the step-by-step guide on how to transfer Windows OS to SSD now.

How to move Windows 10 from HDD to SSD

Hi! I have an HDD and a SSD. When I installed Windows for the first time it got installed on the HDD instead of the SSD and I have no idea of how to reinstall Windows on my SSD instead of the HDD.  My PC is empty only Windows on it, so I don't mind how it's done. I just need a way that works!

Users may want to replace HDD with SSD for various reasons. But how can you safely migrate Windows 10 to SSD without reinstalling it? Please refer to this article to find out the answer.

To transfer Windows 10 from HDD to SSD usually means to move system partition and system-related partition to SSD, so that you can easily boot the computer from the SSD after migration. When it comes to why you need to move Windows 10 to SSD from a physical hard disk drive, there are two main reasons to be summarized.

◆ In the first place, get better performance. Because SSD offers fast boot speeds and faster application load times. So, migrating Windows 10 to SSD is a good idea for users who need to improve their PC's performance.
◆ Secondly, increase disk space. You may face low disk space warning especially for system partition, which causes the PC to run slow. So, you can transfer Windows 10 to a larger SSD to solve it.

How to choose between a clean installation and migration 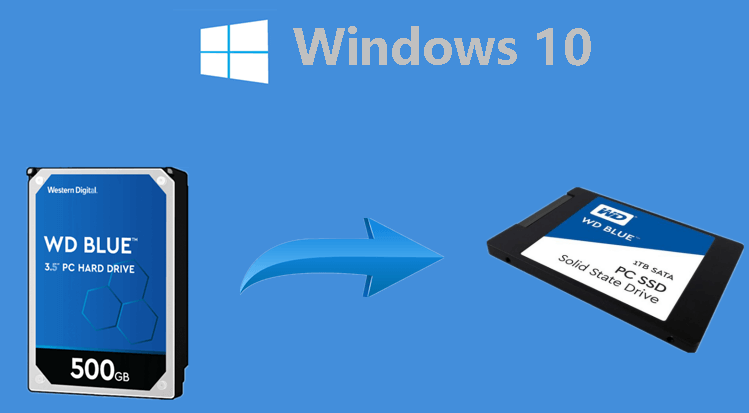 Whether you need to do fresh install is based on your willingness and software installed status on your current hard drive. To be specific, if you installed third-party applications separately from system drive, namely C drive, you can back up personal files in C drive and do a clean install on SSD. The installed applications on other drives will not be affected.

If installed software is together with system programs, clean installing will take a lot longer since you have to reinstall all these programs as well afterwards. In the meantime, all settings, configurations and stored data will be lost. If you would like to keep these data intact and save time, it is advised to migrate Windows OS drive to SSD.

Many SSDs have built-in data migration software, like Samsung Data Migration software. Generally speaking, this type of migration tool does a great job. However, it will move everything on old hard drive to new SSD instead of only Windows 10 OS. Besides, it only supports the Samsung SSD drive. So, a reliable and full-featured OS migrating program is worry-saving.

AOMEI Partition Assistant Professional is a migration tool that enables you to clone only Windows 10 drive to SSD without reinstalling system and programs in C drive. It is an easy-to-use utility. Migrate OS to SSD can help you complete the migration even if you are a computer novice. Now, download the tool to find out how to migrate Windows 10 to SSD step by step. Take migrating Windows OS to a smaller SSD for example. (Windows 11 Also Supported)

Please download the software to see how to migrate Windows 10 to SSD.

Step by step: How to migrate Windows 10 to SSD without reinstalling

◥ Connect the SSD to the PC. Normally, desktops support to install a second disk. To migrate Windows 10 to SSD on a laptop, you may need a SSD to USB adapter.

◥ Make sure the SSD has unallocated space which is equal to or larger than the used space of the current OS partition. If SSD is smaller than used space of current system drive, you can back up personal files, videos, music, movies, pictures in particular to other places that won’t be transferred to SSD. Do disk clean at the same time to let Windows 10 fit on the new SSD.

◥ If the SSD is a new one, please initialize it.

◥  To avoid changing the boot mode, set the partition style(MBR or GPT) to be the same as the source disk.

Step 1. Install and open AOMEI Partition Assistant Pro. Click on “Migrate OS to SSD” in the left pane. An introduction about this wizard will come into your sight, read it and click “Next”.

Step 3. You are able to resize the system partition on this page. Then a note on how to boot Windows 10 on SSD will pop up. Keep it in mind and click “Next”.

Step 4. Confirm all operations and now the D: drive is the cloned Windows 10. Then click on “Apply” > “Proceed” to execute the Windows 10 OS migration to SSD.

After that, the Windows 10 OS has been successfully migrated to SSD. Now, it's time to boot Windows from SSD. To do this, you should set the SSD as boot drive.

Please reboot your PC and press a specific key (usually the DEL, ESC, F1, F2, F8, F9, F10, F11,F12 key) to enter the BIOS settings. Then, navigate to the boot menu and change the boot order. Use the arrow keys to move up/down the boot options until the cloned SSD is correctly set as the boot device.

After migration, the old Windows 10 OS still exists. To free up and make use of that space, you can wipe C drive there after you are satisfied with the new running system. Besides, if backed up data before, you may need to restore files from backup.

AOMEI Partition Assistant Professional is specialized in partition management. It is much powerful and flexible than Disk Management in Windows 10. So if you are the user who wants to manage your partitions easily, you can’t miss this professional software. If you are Windows Server users and want to manage disk partition in Server operating system, just try AOMEI Partition Assistant Server.

FAQs about migrating OS to SSD

✎ Question 1: Can I just transfer Windows 10 to SSD and keep the rest of my data on HDD?

Yes, you can. As the method mentioned in the article, Migrate OS to SSD of AOMEI Partition Assistant can help you realize this idea, and the steps are very simple, suitable for ordinary users without computer background.

✎ Question 2: Can I move everything on my computer, including system and personal data to the SSD?

Yes, you can. Disk Clone feature of AOMEI Partition Assistant provides two methods to clone the entire disk to a new disk, including Windows and personal data. And guarantee that there will be no damage to the data.

✎ Question 3: Is this software compatible with my Samsung M.2 SSD? If so, will it boot normally?

Yes, it is. AOMEI Partition Assistant supports to clone disk of different brands, including Samsung, WD, SanDisk, Seagate, Kingston, Toshiba, etc. Most importantly, all disks can boot normally without any issues after being cloned.