How to Use Samsung Data Migration in Windows Server 2012?

This post shows how to upgrade HDD to SSD with Samsung Data Migration on Windows Server 2012 (R2) and 2008 without reinstalling system and applications in simple steps.

“I have a 1TB HDD currently running Windows Server 2012 R2 Essential for some five years. I’d like to replace it with 1TB Samsung 850 EVO SSD to shorten the boot up time and equip my Server with better condition at the same time. I have the cloning software, Samsung Data Migration Software (SDM), which comes with the SSD. What are specific steps and the things that I should pay attention to? I have no idea about that. Help, please.”

Samsung SSD is one of the most popular HDD replacements among thousands of users due to its high-level performance and reliability. Therefore, when you find current hard drive cannot meet your requirements any more, it is a wise move to replace old hard drive with SSD or a new HDD. Surely, some users like SSD for OS and HDD for storage arranging.

Samsung Data Migration software is designed to help users quickly, easily, and safely replace their existing storage device (e.g. HDD) with their new Samsung SSD. Then, how to use it properly on Server 2012?

Matters You Should Know about Samsung Data Migration on Server 2012

To perform disk cloning task with SDM on Windows Server 2012 or 2008, you need to pay attention to these things.

After knowing the important information, now you can perform the disk cloning with the help of Samsung Data Migration on Windows Server. Actually, the process is quite simple.

Before proceeding to the steps, please pay attention to:

Step 1. Connect the Samsung SSD to your Server. You can connect it via USB-to-SATA cable or just install it. Install SDM. Once installed, it will run automatically and check for latest version.

Step 2. At the main interface, click Start in the lower-right corner. 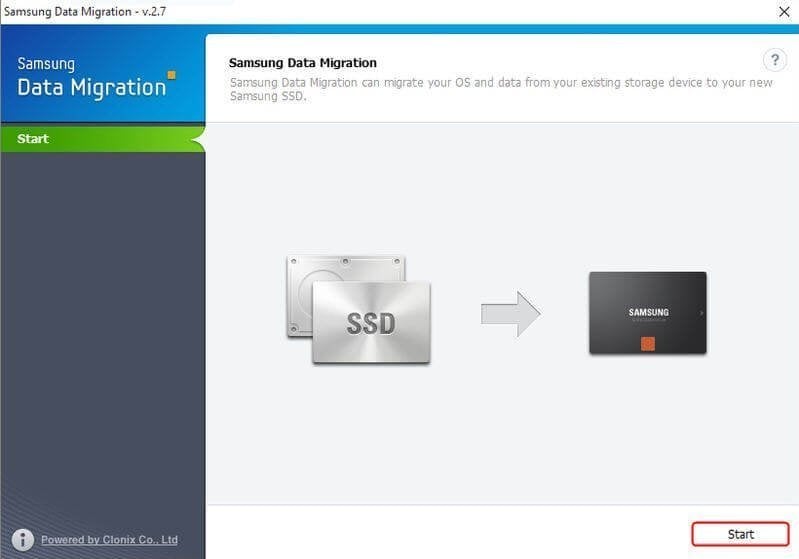 Step 3. At the next page, you can verify the source disk and target Samsung SSD. You can select only one partition to clone at this step. Click Start after your confirmation.

Step 4. It will prompt a warning dialogue. Confirm it and click Yes and then the cloning progress will start immediately. Wait for the process completes. Do not disconnect any of the disks during that process.

Step 5. When you see The data on the Source Disk has been successfully clone to your Samsung SSD, it means the cloning is successful. You can shut down your Server and replace the original disk with the cloned SSD now. 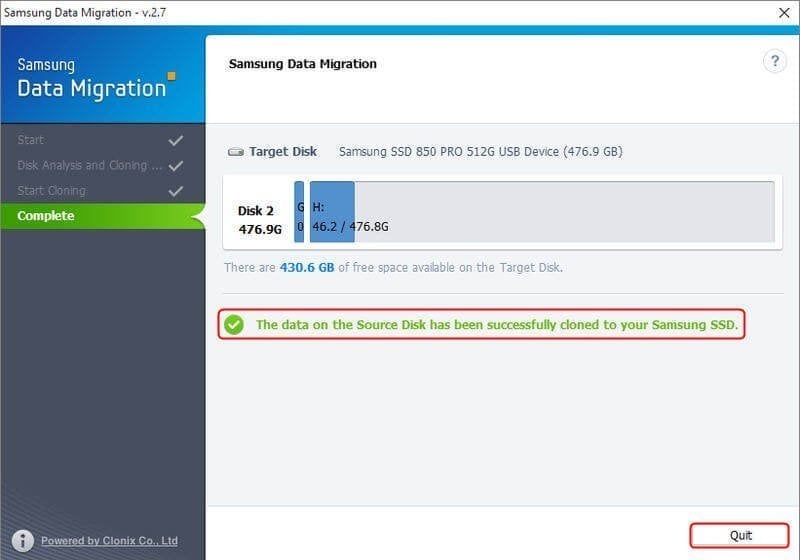 Tip: above steps are also proper for cloning HDD to SSD with Samsung Data Migration on Windows Server 2008 as well.

When the Samsung Data Migration is not working, you can switch to AOMEI Partition Assistant Server. It is a reliable alternative to SDM, and allows you to clone hard drive to Samsung SSD on Windows Server 2012, 2008, 2003, 2016, 2019 and 2022. In fact, you can clone hard drive to any brand of SSD with this software, not just Samsung SSD. Hot clone and SSD optimization are available. Besides, it provides two different methods:

Step 2. Select a way to clone To save time, the first method is recommended. If you want to recover lost or deleted partition at the same time, try the second method. Here will take the first one for example.

Step 3. Select the destination disk (target SSD) at this window. Tick the option Optimize the performance of SSD because the target disk is an SSD.

Step 4. Adjust the partition size. You have three copy options. Choose one of them according to your situation.

Step 5. Here is a note about how to boot up from cloned SSD later. Bear it in mind.

Step 6. Finally, at the main interface, click “Apply” to execute the pending operations.

Step 7. Shut down your Server when you complete the operation. Replace the original disk with the cloned SSD. Reboot your machine and enter BIOS by constantly pressing a specific key (DEL, ESC, F1, F2, F8, F9, F10, F11, F12 ). Then change the boot order in the BIOS interface to make your computer boot from the destination disk.

If you want to clone HDD to SSD using Samsung Data Migration on Windows Server 2012 or 2008, check out what you need to pay attention to and then start cloning. If it fails for some known or unknown reasons, you can use the alternative Server cloning tool.

Apart from cloning hard drive, AOMEI Partition Assistant Server also does quite well in other aspects. For example, it allows you to resize C drive without rebooting OS, convert system disk from MBR to GPT on Server 2012 without losing data, and copy a specific data partition to another hard drive and more. So why not give it a try now?