How to defragment in AOMEI Partition Assistant?

This article will you how to defragment in AOMEI Partition Assistant.

After the disk is fragmented, a single file may exist in different locations on the physical drive in blocks, so the system will collect file fragments when reading files, which will reduce file access speed, and cause system performance degradation. Therefore, defragmenting files can improve the overall performance and operating speed of the computer.
Generally, the household users are suggested to defragment once a month, business users and servers do it once a half month. But it should be considered based on the fragmentation ratio. In the following situations, it is recommended to run the disk defragmentation program:
1. A large number of files have been added.
2. Only about 15% of available disk space.
3. A new program or a new version of Windows is installed.
4. Fragmentation exceeds 15%. 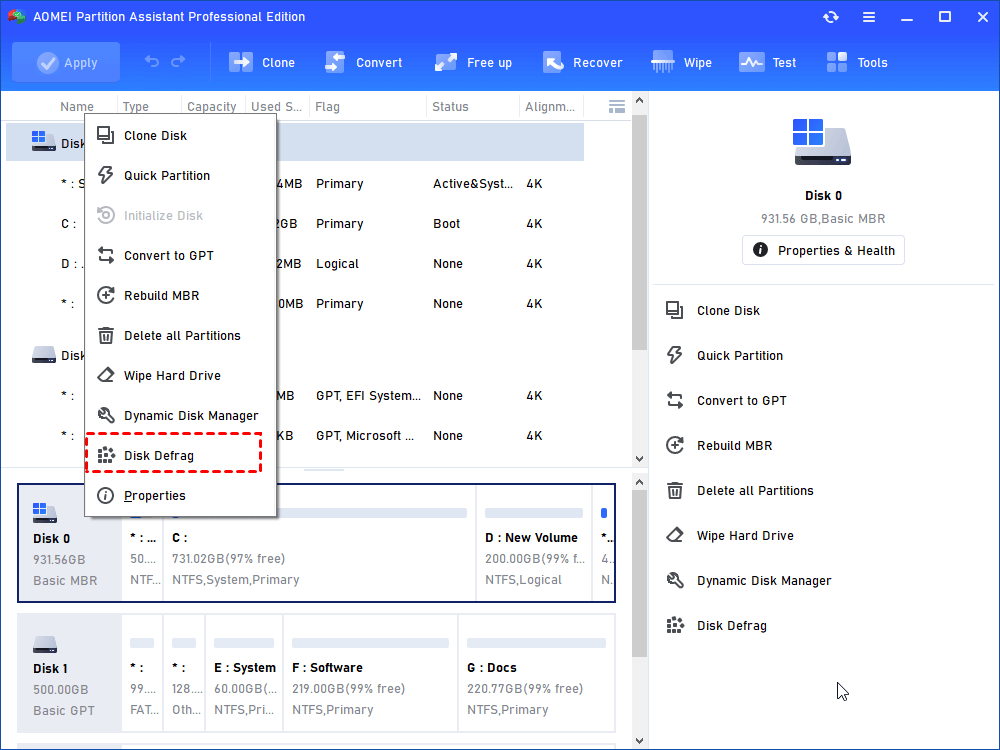 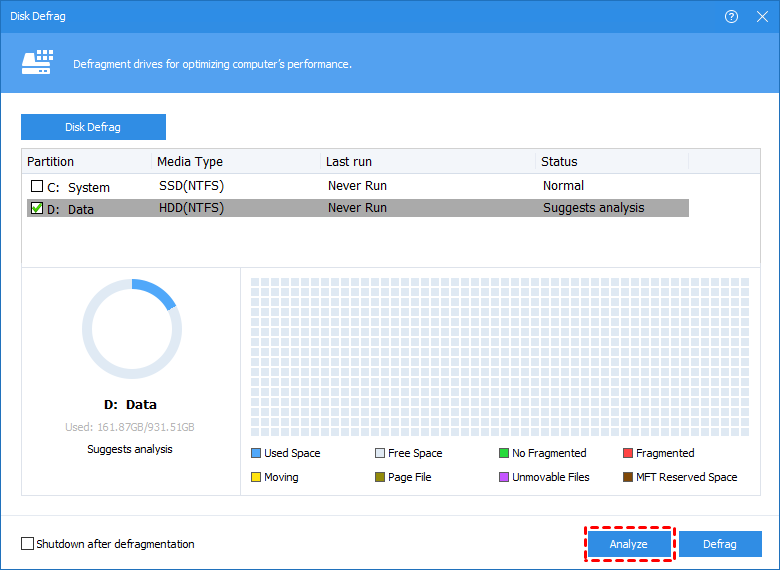 When the analysis begins, you could click "Pause" to pause the process and resume later, or click "Stop" to terminate the process completely. 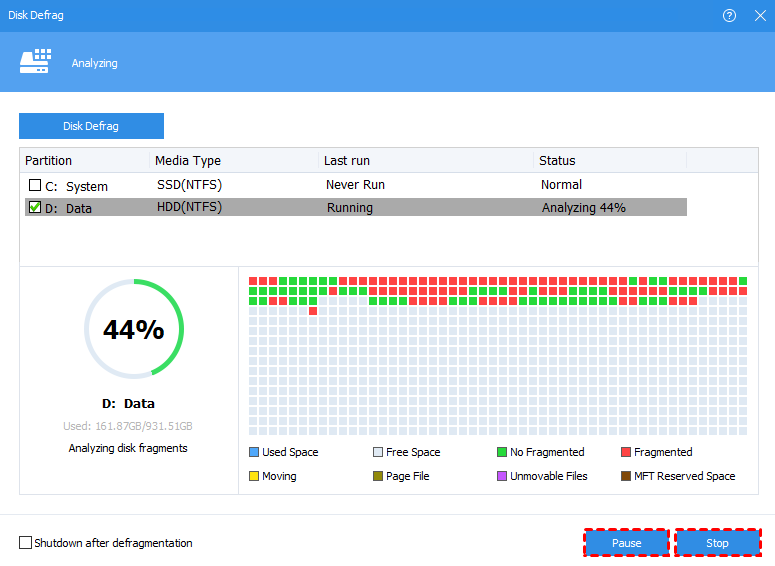 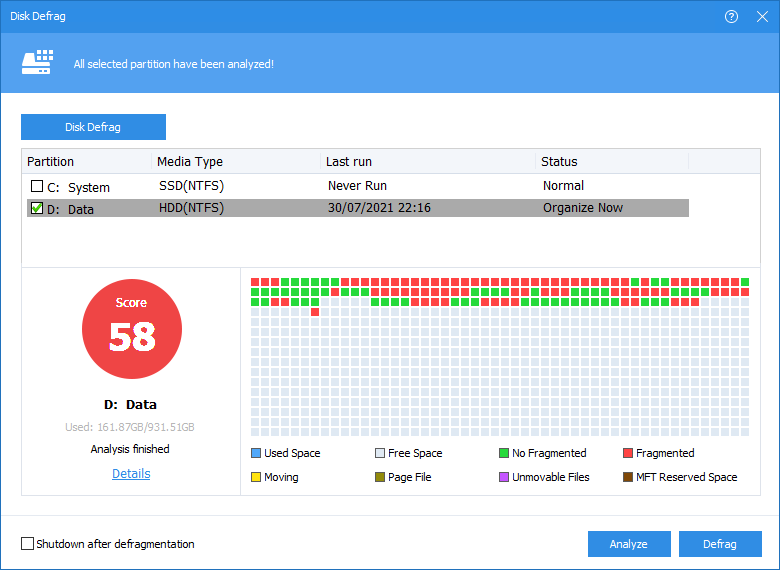 After the analysis is completed, you can click on "Details" to see more information about the analysis results:
Total files and directories
Fragmented files
Fragments
Fragmentation Rate 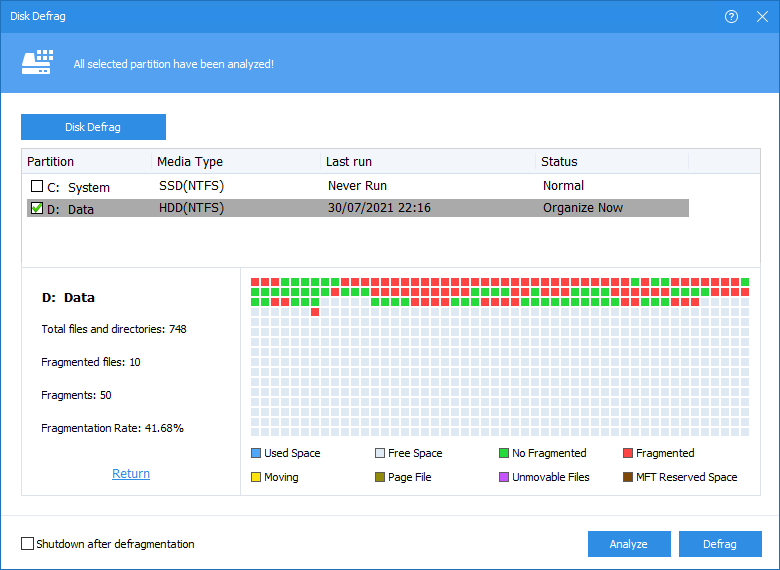 When the fragment analysis is complete, click the "Defrag" button to start defragmentation. 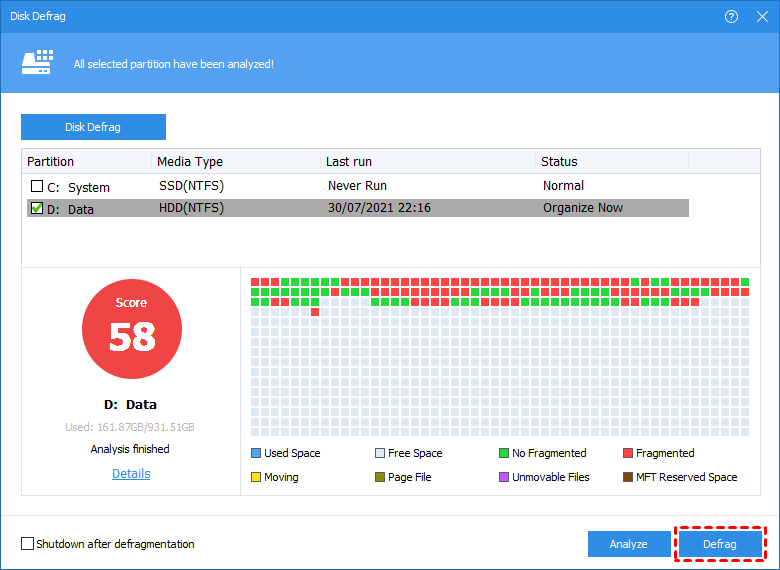 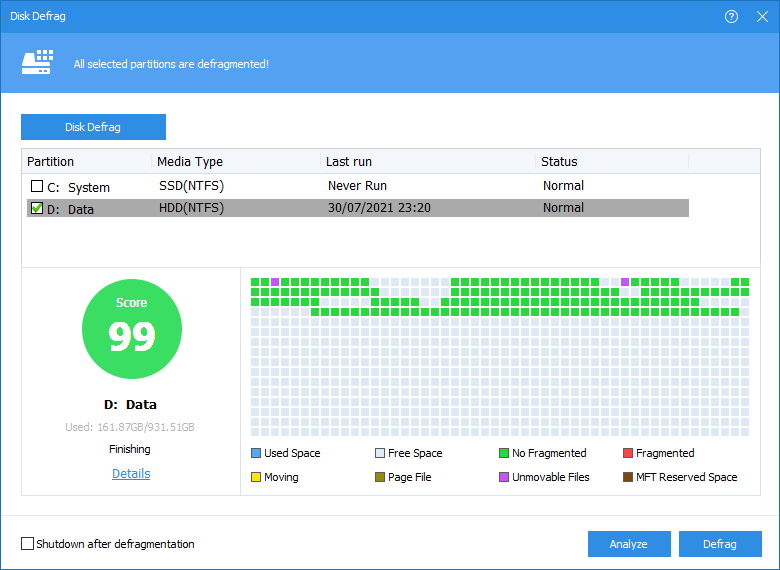 For solid state drives, defragmentation is not recommended, the reasons are as follows:
1. From the principle of disk fragmentation, we can see that the reason that defragmentation can improve computer performance is: by defragmenting disk fragment files, the fragmented files are combined into one, which speeds up the seek time of the disk, thereby accelerating the overall speed of the computer. The storage unit of the SSD is based on the electronic storage of flash memory particles, so the seek time is theoretically eternal, and its performance is only affected by the performance of the main control chip and the process of the flash memory particles.
2. The working mechanism of disk defragmentation is to re-read the files stored on the disk in a certain order and reorganize them. The flash memory storage characteristics of solid-state hard disks determine that the number of erasing and writing is limited. Once the limit is exceeded, the disk cannot be written and will be scrapped. So, defragmentation may reduce SSD lifetime.
3. The TRIM function that comes with the SSD can give full play to the overall read and write performance when it is turned on. In a sense, it has actually acted as a disk defragmentation function.
Our program will show the status of SSD as "Normal", even though there are some fragments. If you check the SSD partition, you will see a pop-up message (as shown below). You can click "Yes", then continue to analyze and defrag. Or click "No" to exit. 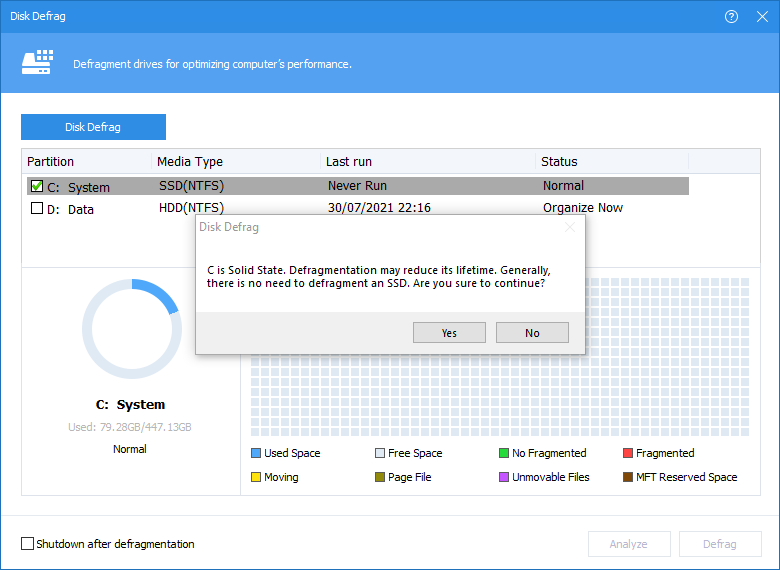