How to Migrate OS to SSD or HDD with AOMEI Partition Assistant [without Reinstallation]?

Here comes an ultimate guide to migrate Windows 10/8/7 operating system to HDD or SSD with AOMEI Partition Assistant, which allows you to easily transfer/move OS to SSD/HDD without reinstallation.

Before you migrate OS to SSD or HDD, it is necessary to have a basic understanding of SSD and HDD.

SSD - Solid State Drive: A kind of hard disk which is made by solid state electronic storage chip and consists of control unit (flash chip) and storage unit (DRAM - Dynamic Random Access Memory chip). It is the same as common hard disk in many aspects, like definition, stipulation of interface, function, usage, appearance and size. It is widely used in military, IT industry, aviation and many other fields.

HDD - Hard Disk Drive: It is the most basic computer storage. Usually, the local disk containing C, D and F drives in computer are all hard disk drives. The capacity of common disk can be 80G, 160G, 750G, 1TB, 2TB…. Divided by the volume, there are PATA, SATA, SCSI…. Among those, PATA is with a large capacity but a low price, so it is suitable for home use. SCSI has a comparatively small capacity and is expensive, but it is with good performance and higher stability, so it is usually applied in high-tech field.

If you make OS migration from HDD to SSD, you can experience faster processing speed in reading and writing, get decreased boot time and you can boot your computer much faster, avoid the risk of data loss caused by shaking the knocking the drive unintentionally, and enjoy relatively quiet working environment. Or when your current hard drive is almost full occupied with more and more data, you can transfer OS to a larger drive. All in all, it is easy to get motivation to perform OS migration.

Migrate OS to SSD or HDD effortlessly within six steps

Then, how to migrate Windows operating system to another drive without reinstallation easily? You can employ AOMEI Partition Assistant Professional, which brings a function named "Migrate OS to SSD Wizard", especially designed for users who want to quickly migrate operating system from old hard drive to a new one but don’t want to reinstall OS. Apart from transferring from MBR to MBR disk or GPT to GPT disk, it supports moving OS between disks with different partition styles, such as migrating OS from MBR to GPT disk. Now, have a closer look at how it works:

Step 1. Connect the SSD to your computer and ensure it can be detected; install and launch AOMEI Partition Assistant Professional. Then, click "Migrate OS to SSD" and click "Next" to continue.

Step 2. Choose an unallocated space on your SSD as the target location. If there is no unallocated space, you can check “I want to delete all partitions on the disk 2 to migrate system to the disk” and then click "Next".

Step 3. In this window, you could resize partition and modify other information (including location, and drive letter) of the partition on new disk, of course, you can also keep default settings.

Step 4. A note about how to boot OS from SSD or HDD will show up, keep it in mind and click "Finish" to continue.

Step 5. You’ll back to the main interface where you can preview the result of operation. To commit it, click “Apply” and “Proceed”.

Step 6. You will see a pop-up message about entering to the Restart Mode. Choose one mode to continue the migration (Windows PE mode is recommended). 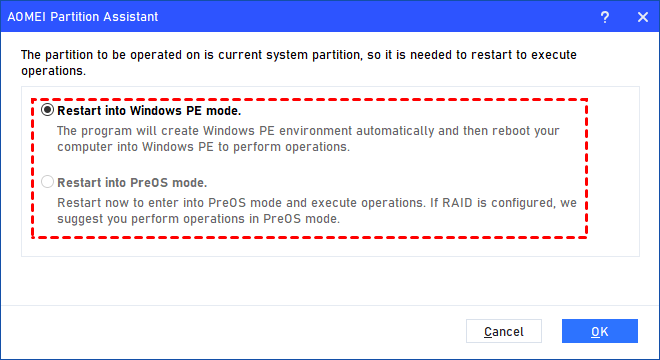